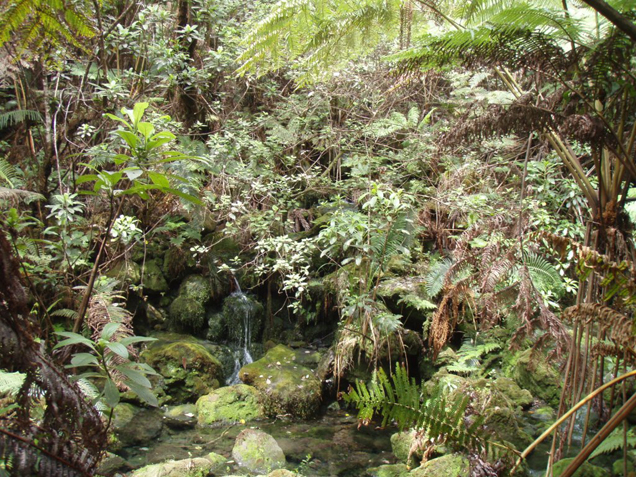 KA‘U, Hawaii: A Draft Environmental Assessment that lays out a management plan for the 61,641-acre Ka‘ū Forest Reserve has been published and now awaits public comment. 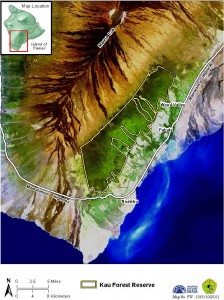 Map showing the location of the Ka'u Forest Reserve

The plan is being prepared by The Department of Land and Natural Resources, Division of Forestry and Wildlife. According to the draft document’s summary:

The Plan responds to a need to maintain and restore key watershed, preserve a unique ecosystem with critically endangered plants and animals, perpetuate natural resources vital to Hawaiian culture and practices, find a suitable site to reintroduce ‘Alalā or Hawaiian Crow into the wild, and provide for continued and expanded public use. Common to all three alternatives under consideration is construction of 12,000 acres of new fenced management units in the upper elevation central portions of the Reserve in which ungulates will be removed and the native forest protected. Field surveys would be conducted to identify locations for the planned fence alignments, and final fence alignments would be sited to avoid any impacts to botanical, faunal, and archaeological resources. Fences would include walkovers and gates to ensure public access into management units. Other actions include weed monitoring and control, trail and access improvements for hunters and hikers, outplanting of rare plant species, cooperation with water source users, and actions to foster reintroduction and survival of the ‘Alalā. Impacts to pig hunting, which is considered by many to be a cultural practice, would occur but be less than significant because of the proposed locations of management areas. DOFAW seeks to balance providing public hunting opportunities in the Reserve with the protection of native ecosystems and watersheds, and the Plan includes actions to substantially facilitate public hunting in the Reserve.

On Tuesday, the Department of Land and Natural resources issued a media release announcing the availability of the draft EA for review and comment until June 22. It can be found online together with the management plan and cultural impact assessment at: http://hawaii.gov/dlnr/dofaw. From the DLNR release:

“This management plan is part of the DLNR’s goal to increase protection of Hawai‘i’s forested watersheds, as well as to fulfill our mandate to restore native Hawaiian species such as the ‘Alalā (Hawaiian crow) and provide access and recreational opportunities to the people of Hawai‘i,” said William J. Aila, Jr., DLNR Chairperson.

DOFAW is working with adjacent landowners to provide additional access, particularly across State-leased and private land below the Reserve, to ensure continued public access. Gates and step-overs will be installed at trails and access points along fences to facilitate access for hikers, hunters, gatherers, and others who use this area.

Nohea Ka‘awa, DOFAW outreach and education specialist, has been meeting with community members for the past eight months to share information about the Forest Reserve, its status, threats, value to people, and proposed actions to protect it from further damage by invasive, non-native plants and animals.

Ka‘awa said: “A lot of cultural knowledge about the Reserve that has been documented and is still practiced today is the knowledge passed down from our Ka‘ū kūpuna. We started gathering community input by talking with our kūpuna, and from there, everything else fell into place.

“We consulted and interviewed over 80 community members and actually had site visits with them up into the remote parts of the Ka‘ū Forest Reserve where we are planning some of our projects. There is a lot of support for this project from the community. The Ka‘ū hunters we met with were very interested in the project and some even volunteered themselves to help with the fencing and management work.”

Shanell Leilani Dedman, a Ka‘ū resident, Cultural Resource Specialist, and Makua member of Kūpuna Council for Hawai‘i Volcanoes National Park, is supportive of continued and expanded public use. She noted that “Access to the Ka‘u Forest Reserve for residents, especially to the Ka‘ū district, should be a priority. Protection of the forest for cultural, recreational and personal gathering rights among others is a positive step towards promoting stewardship. The Ka‘ū Forest Reserve are wahi kapu (sacred areas).”

Ka‘awa added that “DOFAW’s goal is to work with the Ka‘ū community throughout the implementation of the plan and to continue to provide programs that will educate future generations about the environment and how we are all connected.”

The DLNR says the Ka‘ū Forest Reserve was established in 1906 to protect these forests on the lower slopes of Mauna Loa to ensure a good water supply for the agricultural lands of Ka‘u. Tunnels and springs in the Ka‘ū Forest Reserve are still used today for domestic use as well as agriculture. “Much of the agriculture in Ka‘ū, including coffee, macadamia nuts, and ranching, depends on a supply of fresh, clean water from the springs and tunnels in the Reserve,” wrote DLNR, “and maintaining this water supply is vital for the future viability of agriculture and the Ka‘ū community. The Reserve’s native forests replenish springs and other groundwater, reduce flooding and erosion, provide habitat for unique species of plants and animals and are also a cultural, recreational and scenic resource for the community.”

One issue that is certain to come up during the public comment process: the proposal to fence 12,000 acres and eradicate the ungulates within. The EA goes into detail about this proposal, here:

To protect the water resources of the Reserve and limit damage to native Hawaiian ecosystems, a combination of fencing and feral ungulate removal from fenced units is needed. Without fencing, ungulate control is not effective, due to reproduction of existing populations and continued ingress from adjacent areas. The construction of fenced management units is proposed for approximately 12,000 ac (4,856 ha) in the upper elevation (4,000 – 5,000 ft (1,219 – 1,524 m)) portions of the Reserve. We have prioritized this area because the proposed fencing and feral ungulate removal would protect a large portion of the Ka‘ū Forest Reserve landscape, including important watershed and existing native species habitat, particularly habitat for the three endangered forest bird species. This area is also a priority for restoration for release of the ‘Alalā. Monitoring data from forest bird transects shows this area is the portion of the Reserve that has the most feral ungulate damage. Although there is currently an intact canopy of tall native trees, in many areas much of the ground and understory layers of ferns, small plants and young tree seedlings have been damaged by feral ungulates, leaving the ground bare and exposed. Without management, the native forest will continue to decline because young trees will not be able to grow and become established to replace the older canopy trees as they die. Fencing and feral ungulate removal will benefit native ecosystems by limiting the browsing and trampling of native plants. Other benefits include reduction of soil erosion/exposed soil and subsequent invasion of non-native plants. 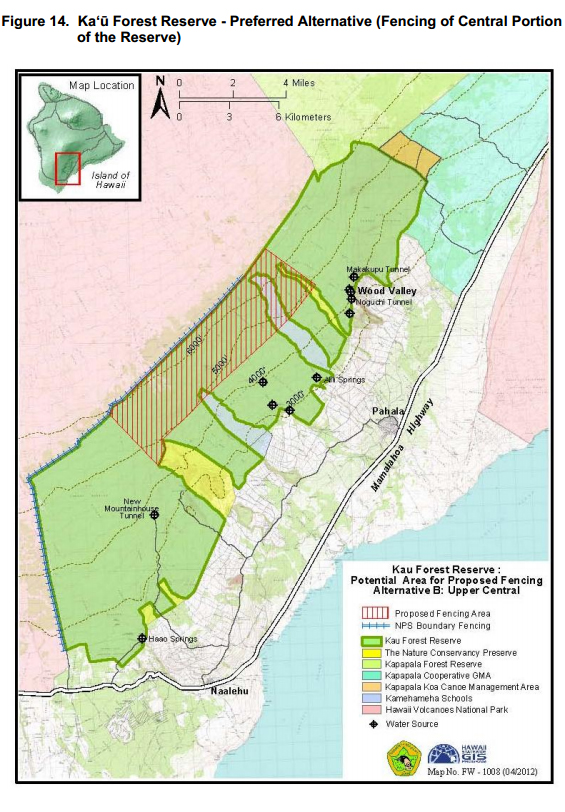 We are still determining the location, size design and number of the fenced units that would be constructed within the proposed area for fencing. The area would be subdivided into separate fenced subunits of 2,000 – 4,000 ac (809 – 1,619 ha) in size that would be fenced over time, as funding becomes available. The final configuration and number of fenced unit(s) will consider factors such as water resources, quality of native ecosystems and habitat for native species, level of damage from ungulates, public use of area, cooperation with adjacent landowners, terrain, logistics, accessibility, and feasibility for effective feral ungulate removal. Field surveys will be conducted to identify locations for the planned fence alignments, and final fence alignments will be sited to avoid any impacts to botanical, faunal, and archaeological resources. Fences are not meant to restrict public access into management units, and walkovers and gates will be installed in order for people to access fenced areas. Fencing costs are estimated at approximately $150,000 per mile (labor, materials and helicopter), and will be completed based upon the availability of funding for labor and materials. DOFAW staff and/or contractors will need to implement construction of fenced units in phases.

As fence construction is completed, DOFAW staff will use various approved methods to remove ungulates from within the fenced units (State of Hawai‘i 2007). Public hunting will be encouraged during the first phase of ungulate removal where safe, feasible and effective, but additional control methods including drives, trapping, staff control with dogs, and snaring, may be needed to remove all the ungulates.

Regular fence inspection and maintenance will be needed once fence construction is complete. Fences will also need to be replaced as they deteriorate and costs for fence replacement will need to be taken into account in future management plans.

Earlier in the document, authors wrote:

An alternative that was suggested by several parties during early consultation was fencing and removing ungulates from all of the Ka‘ū Forest Reserve. It is recognized that there are rare plants, birds and important native ecosystems that require preservation throughout the Reserve. Maintaining and/or restoring areas of low elevation may be vital to preserving the long-term health of forest bird populations, which visit different parts of the Reserve at different times to follow flowering or other resources. Furthermore, protecting only high elevations may not fully protect the vital watersheds that provide domestic and agricultural water in the wells, tunnels and springs below. However, fencing all or most of the Reserve was dismissed from consideration from the current version of the Plan because the cost, at an estimated $20 million for fencing alone, would be exceedingly high, beyond what DOFAW expects to have available in the next 15 years. Moreover, removing ungulates from the entire Reserve is opposed by community members because it would adversely affect hunting opportunities. As discussed in Section 3.1.5 below, hunting in Ka‘ū is an important component of subsistence and cultural practice. Discussions with Ka‘ū community members indicated general opposition to fencing the entire Reserve. Without a certain level of community support for the general management of the Reserve, the Plan is unlikely to succeed.