Lava lake 100 feet away from overflow 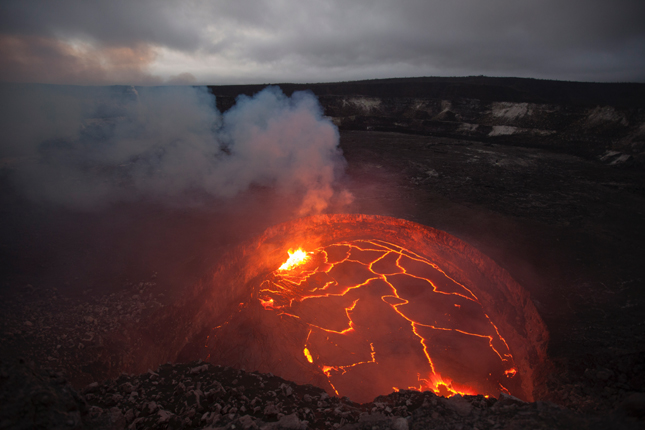 The rising lava lake at the summit of Kilauea volcano has reached a new record level, as it creeps closer to the floor of the Halema’uma’u crater.

According to the Kilauea update posted by USGS Hawaiian Volcano Observatory staff on Wednesday:

Yesterday evening the lava high mark was measured using a laser rangefinder at 31 m (100 ft) below the floor of Halema`uma`u Crater. This is the highest lava level measured thus far during this summit eruption. Over the last day, spattering from the margin of the lava lake appeared to occasionally cast small bits of spatter up to the level of the floor of Halema`uma`u.

The volcanic activity, “tantalizing visitors” at the Hawaii Volcanoes National Park, prompted a media release from park officials a few days ago (right).

The release also quoted Dr. Jim Kauahikaua, HVO’s Scientist-in-Charge, as saying the lava lake will be visible from the overlook at Jaggar Museum if it comes within about 65 feet of the crater floor. The show could start for visitors any day now.

No need to wait. To get a good look at the bubbling lava, you need only to visit the HVO website, where staff have been posting amazing photos of the lava on a regular basis.

The USGS photo at the top of the page was taken at sunset on October 22, when the lava was 110 feet below the floor of Halema’uma’u.

Scientists also posted this Quicktime movie (right), which shows a time-lapse sequence of the lava lake captured by a thermal camera on the rim of Halemaʻumaʻu crater. The sequence is shown at a speed of about 30 times actual. By viewing the sequence at this speed, spotting the upwelling area in the lake is easier than in a still photograph.

Scientists say they have recorded extension across the Kilauea caldera since early August, and this extension began to increase in rate at the beginning of October.