Video by David Corrigan UPDATED: 9:30 a.m. with video of Abel Lui meeting with kanaka maoli leaders in Hilo (scroll down below) HILO, Hawaii: Monday night was the eve of the big general election, and in Hilo, politicos spent the afternoon and evening as they normally do the day before the vote… Sign waving on […] 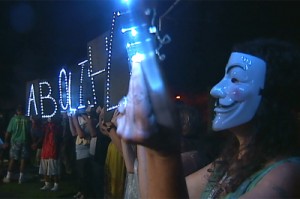 UPDATED: 9:30 a.m. with video of Abel Lui meeting with kanaka maoli leaders in Hilo (scroll down below)

HILO, Hawaii: Monday night was the eve of the big general election, and in Hilo, politicos spent the afternoon and evening as they normally do the day before the vote…

Sign waving on Kamehameha Avenue, followed by the traditional Democratic Grand Rally at the Mo’oheau Bandstand by the Hilo bayfront.

Once there, candidates expressed their final plea for public support, and urged everyone to get out to vote, especially to help decide the hotly contested State Senate race between Republican Linda Lingle and Democrat Mazie Hirono.

Others running for office took the stage… even candidates in the non-partisan races like Hawaii County Council and Hawaii County Mayor.

The rain kept the crowd down a bit, but what set this year’s rally apart was the presence of demonstrators.

It was during U.S. Congressional candidate Tulsi Gabbard’s speech that things got interesting.

First, a “Free Hawaii” group marched to the edge of the bandstand, holding signs and shouting remarks about the illegal occupation of Hawaii by the United States.

Also, the gang from the Occupy Hilo movement, many in their “Guy Fawkes” masks, demanded to “Abolish the PLDC”… a protest against the controversial Public Land Development Corporation that Governor Neil Abercrombie and State Senator Malama Solomon advocated for last legislative session.

The governor was in attendance at the rally, and he appeared a bit irked by the opposition.

But the most tense moment of the night came a few minutes after Abercrombie’s statements, when activist Gene Tamashiro took the governor up on his challenge to participate. Here is the video from that moment (right).

Eventually things simmered down. But the confrontation had been in the making ever since the “Free Hawaii” group – led in part by Tamashiro – gathered at the Kamehameha Statue in Hilo to do some sign waving of their own earlier in the day.

The “Free Hawaii” gathering was also significant because of a meeting among the island’s kupuna… many angered after the recent eviction of Abel Simeona Lui from Kawa.

Lui was in Hilo for the gathering, where he presented his case to the respected kupuna, known supporters of Hawaiian sovereignty (right) in the hopes of figuring out what to do next.

At the table, Albert Kahiwahiwa’okalani Ha’a Jr., who told everyone that it is his mana’o that the land does not belong to anyone but God…

And Sam Kaleleiki, Jr., who urged everyone to be realistic about Abel’s situation, and to coordinate a sound plan of action.

Since evicting Lui and his supporters from Kawa, government officials have been conducting an archaeological survey of the popular beach. The county purchased the land using a special open space fund last year, and plans to make it into an accessible park for the public to enjoy.

In the meantime, Abel is doing OK, but he says he wants to return to Kawa, where he was considered by some to be the acting konohiki of the land.