The material used in this report first aired as a part of a news story on KITV in Honolulu, used here with permission KAILUA-KONA, Hawaii – An internet copyright infringement lawsuit with a local connection is making headlines. Artist Brad Parker – known as Tiki Shark – creates what has been described as Polynesian Pop […]

The material used in this report first aired as a part of a news story on KITV in Honolulu, used here with permission

Artist Brad Parker – known as Tiki Shark – creates what has been described as Polynesian Pop Surrealistic Art. And he says some of those works are showing up, reproduced without his permission, on various items for sale by Internet retailer CafePress.com

Parker and his lawyers – attorneys David E Smith and Schneider Rothman IP Law Group – say that in May, the Dubai affiliate of surf goods giant Body Glove ordered from Tiki Shark Art some 25,000 towels featuring Parker’s painting “Forbidden Island.” However, the Middle East company cancelled when it discovered the image was already being reproduced on over 218 items by a Internet retailer CafePress.com. The lawsuit claims that CafePress.com removed Parker’s signature, and reproduced and distributed his work on consumer goods without his permission. 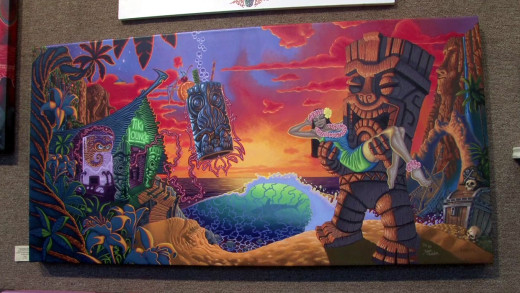 Have you seen this painting? “Forbidden Island” has been illegally reproduced on various products, according to the artist behind the work, “Tiki Shark” Brad Parker

CafePress allows users to upload their own images and logos to its webiste, which the company than reproduces on things like T-Shirts and mugs, and then sells… giving a commission to the user who uploaded the image.

Artist Tiki Shark says CafePress did not investigate whether its members had licensing rights to Parker’s painting.

Here is a little more about Tiki Shark and his approach to art. His work can be found at the Wyland Kona Oceanfront Gallery in Kailua Village. Find him online at tikishark.com.