Friends of the Future To Help Lapakahi State Park 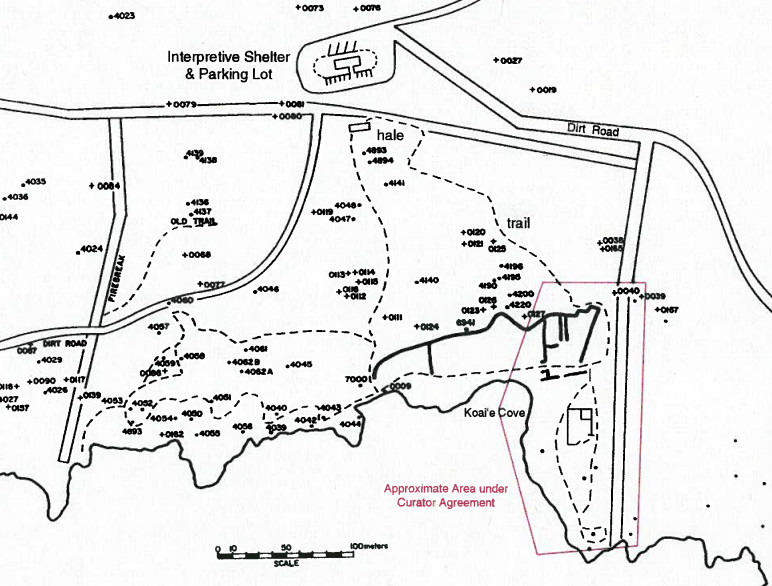 October 23, 2015
Board of Land and Natural Resources
State of Hawai‘i
Honolulu, Hawai‘i

The Curator Program was initiated in 1987 by the State Historic Preservation Division (SHPD) and the Division of State Parks to encourage community involvement in the care and management of historic and cultural sites on State-owned properties. Over the years, the volunteer program has expanded to include natural resources in the parks and projects such as educational programs, interpretation, and site restoration. The agreements developed between the organization and the Department of Land and Natural Resources (DLNR) outline the responsibilities of the volunteer organization for a 5-year term.

Lapakahi State Historical Park (SHP) was officially established in 1973 and now consists of 279 acres of State-owned land set aside to preserve, protect, and interpret the significant cultural complex of archaeological sites along the leeward coast of North Kohala on Hawai‘i Island. The park corresponds to the makai portion of the Lapakahi Complex which was listed on the National Register of Historic Places in 1973. The complex is significant for the density and diversity of archaeology sites associated with a traditional ahupua‘a system that encompasses the coastal fishing settlements to the upland agricultural fieldsystem. Approximately 50 acres of the park at Koai‘e Cove are open for public visitation. Within this archaeological complex are housesites, canoe sheds, enclosures, ko‘a (fishing shrines), and burial sites. A mile-long interpretive trail has been constructed through this complex to interpret traditional coastal habitation within the larger theme of the Hawaiian ahupua‘a. In addition, native Hawaiian plants have been planted throughout this central park area. A small interpretive shelter with exhibits and displays was constructed in 2000. The remainder of the park remains undeveloped.

State Parks entered into a 5-year volunteer agreement with Na Haumana La‘au Lapa‘au o Papa Auwae (NHLLOPA) in December 2010. The group consists of students who trained under Henry “Papa” Auwae from 1994 to 2000. This agreement will expire in December 2015 and NHLLOPA has requested to continue to assist State Parks with the care, management of selectedcultural resources and plantings in the Koai‘e Cove section of the park. However, the new agreement will be with the Friends of Future, a 501(c)(3) organization formed in 1991 to create trust and harmony amongst the diverse cultures of Hawai‘i. Friends of the Future provides organizational support to more than 60 community-based programs, including NHLLOPA and their stewardship of the Koai‘e Cove area of Lapakahi SHIP. Because of the affiliation between these organizations since 1994, we believe the Friends of Future is an appropriate partner for this volunteer agreement and will provide the 501(c)(3) status being sought in these’agreements.

Since the establishment of the curatorship with NHLLOPA in 2010, the haumana have held monthly work days in which they have replaced the old bamboo fence protecting Koai‘e Bay, cleaned and maintained the thatched hale constructed for Henry Auwae, helped Park staff with the removal of stones blocking the trails after the rock walls were destroyed by heavy storm waves, cleared areas of invasive plants, and planted la‘au (medicinal plants). All tasks and projects are guided by cultural protocols. Presently the haumana are replacing the fence protecting the pakaukau site, assisting the Park in installing new water lines, and planning to re-thatch the hale.

In 1994, the late Henry “Papa” Auwae, po‘okela (master) la‘au lapa‘au, initiated an annual gathering of practitioners from all the islands. The haumana with the support of Friends of the Future and other organizations, have continued these annual gatherings at Lapakahi SHP as a cultural mandate. This will be their 22nd year.

State Parks encourages community involvement and assistance with the care, management, and interpretation of the resources in the parks. The Friends of the Future has indicated a willingness to assist with the maintenance of the Koai‘e Cove area in coordination with State Parks and NHLLOPA. State Parks recommends that the Board grant approval for DLNR to enter into a 5-year agreement with the Friends of the Future to allow them to care for the Koai‘e Cove area of Lapakahi State Historical Park subject to the following conditions:

1. Review and approval of the agreement by the Department of the Attorney General.

2. The Friends of the Future prepares the required environmental and regulatory documents and obtains approvals and permits that may be required prior to conducting any major improvements or restoration of historic sites.

3. Amendments and renewals of the volunteer agreement are delegated to the Chairperson.

4. And such other terms and conditions as may be prescribed by the Chairperson to best serve the interests of the State.