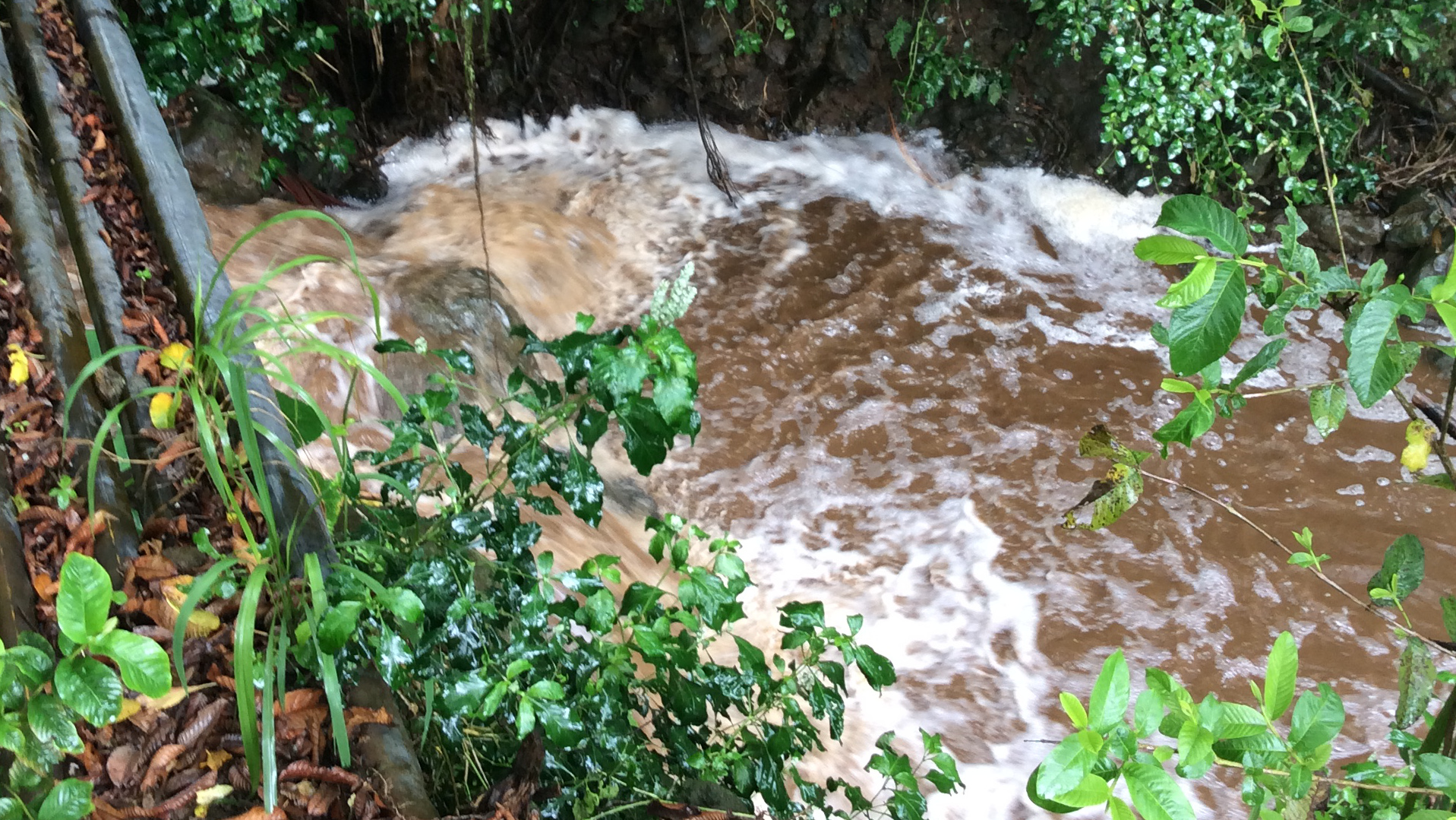 NOTE: The image above is a community photo that allegedly shows wastewater from the dairy being discharged into a stream.

Kupale Ookala and the Center for Food Safety filed the lawsuit on Wednesday, June 28, following through with their notice of intent to sue the O’okala farm in May. Since that time, the Hawaii Department of Health issued a notice of violation to the dairy operation after a 2014 inspection found “unlawful discharge of wastewater from the dairy’s Concentrated Animal Feedlot Operations (CAFO)” to Kaohaoha Gulch.

The health department ordered Big Island Dairy, LLC to immediately cease discharging wastewater to state waters, pay a penalty of $25,000 to the state, and take corrective actions to prevent future unlawful discharges from the dairy to state waters. However, litigants say the dairy “has continued to discharge animal urine and feces, endangering public health and the environment, and violating the Ookala community’s right to enjoy its local waters.”

Dairy owner Steven Whitesides faced an angry O’okala community during a community meeting on May 10. “I wish we could have gotten started on a different foot,” Whitesides told the crowd (video below).

The June 28 complaint, filed in the federal district court of Hawaii, alleges that Big Island Dairy’s improper manure applications and storage practices have caused, and continue to cause, discharges of animal waste and pollutants into streams flowing into the Pacific Ocean, according to this media release:

Big Island Dairy, a large concentrated animal feeding operation (CAFO), confines nearly 2,600 cows uphill from the town of Ookala, northwest of Hilo, at the base of Mauna Kea. The dairy is supposed to store and use all of its animal urine and feces onsite, including holding it in open-air waste lagoons and spraying the manure wastewater as liquid manure on its crop fields. However, residents of Ookala have witnessed brown murky water smelling of animal feces, tested to contain high levels of dangerous bacteria, flowing from the dairy into local waterways, and ultimately into the Pacific Ocean. They have also observed the dairy spraying liquid manure on its crops during high wind days, or immediately before or during rainfall, leading to increased runoff and pollution drift. Under the Clean Water Act, any discharge from Big Island Dairy is a violation of state and federal water pollution laws.

“Big Island Dairy has been dumping manure on the residents of Ookala, including flooding our properties, for many years. Our community is standing strong to protect itself from the dairy’s pollution and the failure of the state to protect its people. We want to be in the driver’s seat so we can hold this polluter accountable and protect our community,” said Genard Frazier, member of the community group Kupale Ookala.

“Intensive confined animal operations like Big Island Dairy generate enormous amounts of animal waste that carry devastating environmental and human health harms. That is why the Clean Water Act prohibits such discharges. It is time that Big Island Dairy complies with the law,” said Sylvia Wu of Center for Food Safety and attorney for the groups.

“Big Island Dairy’s pollution is akin to dairies that wantonly discharged manure decades ago on the mainland,” said Charlie Tebbutt, attorney for the groups. “The Clean Water Act provides communities such as Ookala the means to protect themselves. Big Island Dairy has a lot of work to do to fix the problem, but we’ll make sure it gets done.”

“When mainland companies come to Hawaii to operate businesses, it is critical that our state government ensures that our communities and our resources are not unfairly threatened by these companies’ pursuit of profit,” said Dr. Ashley Lukens, Director of Hawai‘i Center for Food Safety. “Instead, from GE seed corn to CAFO dairy operations like this one, the devastating public health and environmental harms of industrial agriculture are unfairly borne by communities without political clout. We are proud to stand with the residents of Ookala.”

The plaintiff community groups are jointly represented by the Law Offices of Charlie Tebbutt, Center for Food Safety and Amanda Steiner of Terrell Marshall PLLC.