HILO, Hawaii - The 20-foot diameter fiberglass dome is being touted as an answer to Hawaii Island's homeless crisis. 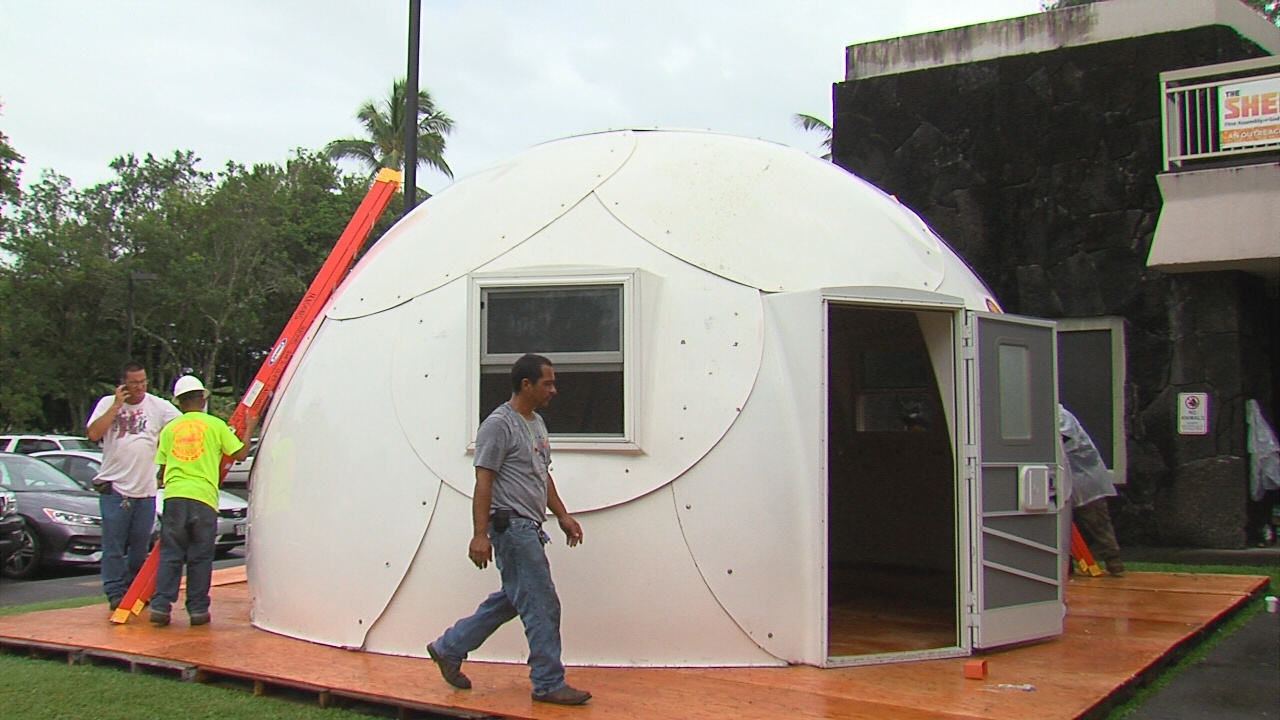 (BIVN) – A unique, portable shelter could be the key to housing the homeless on Hawaii Island.

The 20-foot diameter fiberglass dome was assembled in just over an hour on Thursday outside the county building in Hilo.

The display has been loaned to the County by the First Assembly of God in Moanalua on O‘ahu, following the recent faith-based summit held to address family homelessness in Hawaii. The congregation led by Pastor Daniel Kaneshiro shipped the dome at its own expense to Hilo for the summit, and is lending it to the County to display for a week.

County officials have been impressed by the concept. Mayor Harry Kim inspected the dome today after it was erected, according to a media release. “The County is developing a master plan to address our homeless crisis, and this concept is one of the options that we are looking at to provide temporary shelters,” the mayor remarked.

Dome developer Captain Don Kubley of Juneau, Alaska, was on hand to explain how the “igloo” shaped shelter can withstand hurricane force winds, 30 feet of snow, and is even cool in a hot summer.

According to a Hawaii County news release:

The County is working on a comprehensive, multi-pronged plan that addresses not only houselessness, but also mental health issues, workforce development, health and hygiene, financial literacy and education in an effort to tackle the many causes of homelessness. A broad coalition of the County, State, churches, non-profits, businesses, and other concerned citizens is rallying to help. The ultimate goal is to graduate the people who are helped into affordable housing, jobs and a better future.

Dome developer Captain Don Kubley of Juneau, Alaska, was on hand to explain that the dome can sleep a family of four, with 12-foot ceiling capable of accommodating a loft for sleeping or storage space. Kubley said that he is negotiating an order for 40,000 domes from FEMA, to house hurricane victims in Houston, Florida and Puerto Rico. The price per 20-foot diameter standard white unit for humanitarian purposes, with two windows and a door, is $9,500.

Kubley said that when Hawai’i needs his InterShelter domes: “You will be put at the front of the production queue.”