PUNA, Hawaii - Volcanic gas emissions remain elevated throughout the area downwind of the fissures, and magma continues to be supplied to the lower East Rift Zone. 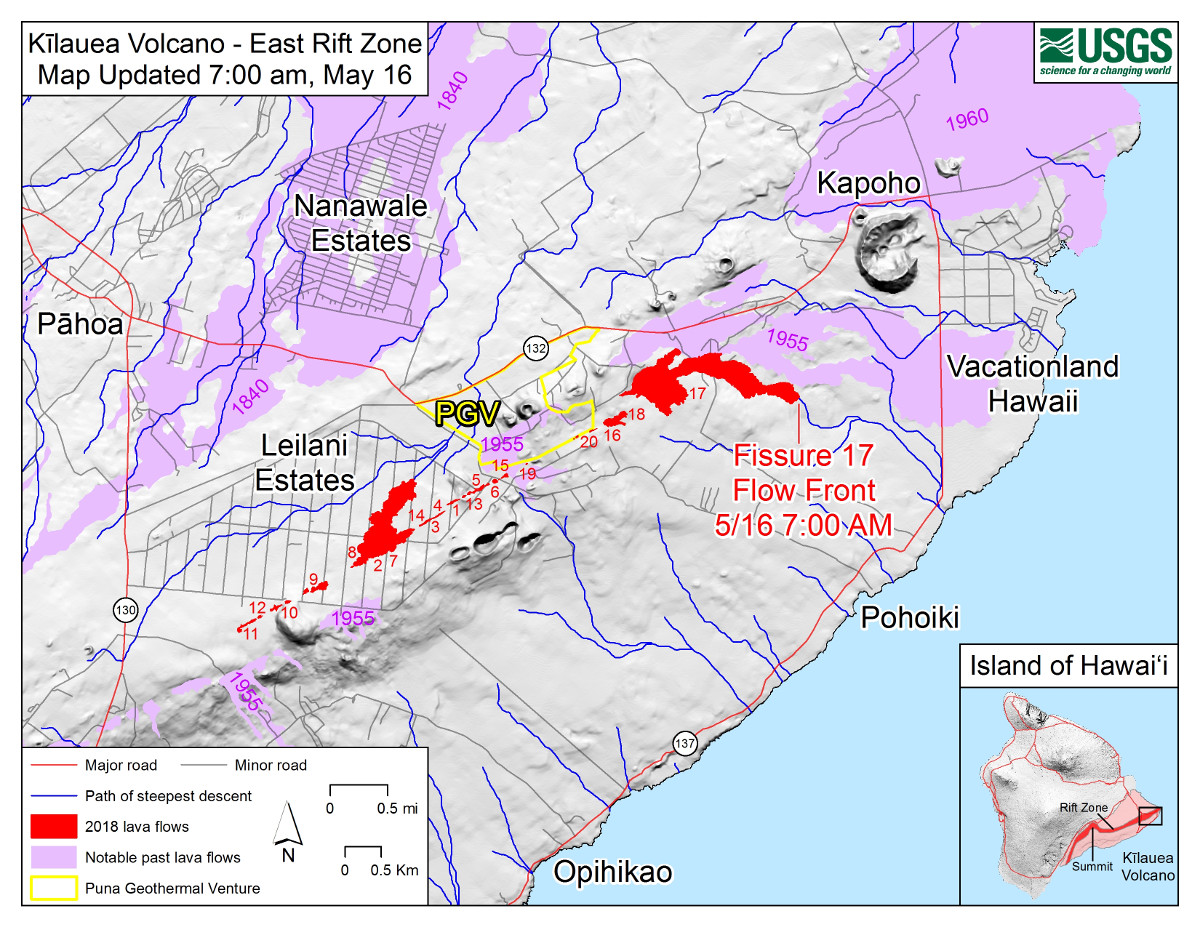 Heavy de-gassing is occurring at each vent, officials say.

Here is the latest information collected from different agencies, supplemented by multi-media.

This afternoon, eruptive activity remained concentrated at fissure 17 but the spattering was decreasing in vigor. The advance of the flow has slowed significantly since yesterday afternoon; the flow remains nearly 2.5 km (1.5 mi) in length.

Volcanic gas emissions remain elevated throughout the area downwind of the fissures.

Magma continues to be supplied to the lower East Rift Zone as indicated by the continued northwest displacement of a GPS monitoring station. Elevated earthquake activity continues, but earthquake locations have not moved farther downrift in the past couple of days.

Ash emission from the Overlook crater within Halema`uma`u has generally decreased since yesterday. Although varying in intensity, at times the plume contains enough ash to be gray in color. The cloud is rising an estimated 3 to 4,000 feet above the ground, but altitudes are varying with pulses of emission. The ash cloud is drifting slowly northward from the Kilauea summit and ashfall may occur in Hawai`i Volcanoes National Park and Volcano Village. Communities downwind may receive ashfall and should take necessary precautions.

Several magnitude 3 or stronger earthquakes occurred beneath the summit today. The earthquakes were at shallow depth and resulted in cracks in Highway 11 near the entrance to Hawai`i Volcanoes National Park. Some facilities within the National Park were damaged as well. The explosive eruption of 1924 at the Kilauea summit was also marked by hundreds of felt earthquakes as magma drained from the caldera.

An additional American Red Cross shelter has been opened at the Sure Foundation Church on 16-1592 Pohaku Cir, Keaau.

Most of Hawai‘i Volcanoes National Park has been closed since Friday, May 11 due to ongoing seismic activity, summit deflation, and a possible steam explosion at the summit of Kīlauea Volcano.

“The residents of Puna are going through a very difficult time,” Hawaii County Civil Defense said. “We ask for your help and understanding. We are on watch 24-hours a day for your safety.”