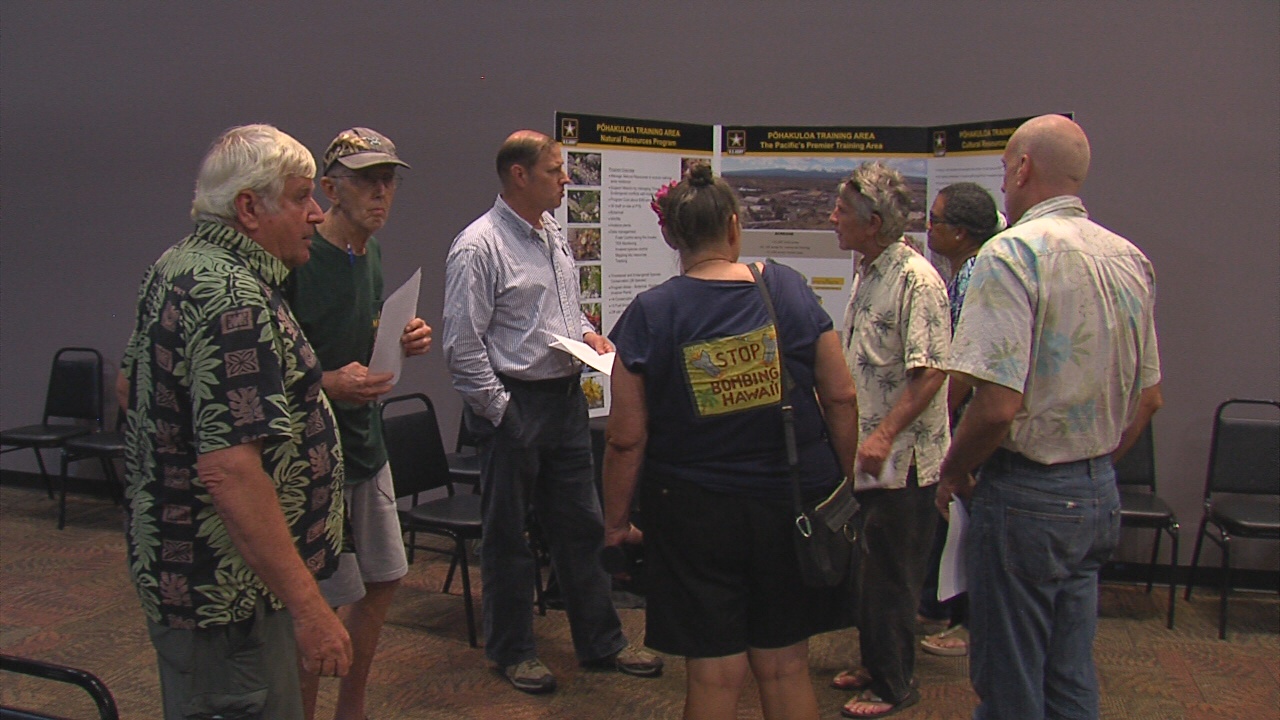 Critics surround one of the information stations at Wednesday night’s meeting in Hilo.

(BIVN) – The new commander at Pōhakuloa Training Area worked a room of both military supporters and critics during a public meeting in Hilo Wednesday night.

Lt. Col. Loreto V. Borce Jr assumed command of PTA in May 2018, and the informational session at the ‘Imiloa Astronomy Center was a chance for the Honolulu-native to meet the public as the Army solicits feedback on its draft Hawai‘i Island programmatic agreement for routine military training. According to the U.S. Army Garrison-Hawaii:

The draft PA describes how the Army proposes to avoid, minimize and resolve any potential effects routine training and related activities may have on historic properties. It consolidates previous and new Army cultural resource commitments in a single, agreed-upon document. It will also improve preservation efforts and reduce administrative time and paperwork for consulting parties, the Hawaii State Historic Preservation Division, the Advisory Council on Historic Preservation, and the Army’s Cultural Resources section at Pōhakuloa.

“I’ve been conducting a lot of outreach,” Lt. Col. Borce said, adding that since he is from Hawaii, there’s “a sense of responsibility to go out and to reach some folks.”

One of the community members Borce had the chance to speak to at the meeting was peace activist Jim Albertini.

“It’s like a science fair,” Albertini said in criticism of Wednesday’s meeting. “You go around to the different stations and then if you want to put something on the record you go into the detention facility in the back corner and submit it in writing or on the videotape.” He preferred to have a public hearing.

No comprehensive independent environmental survey has been done on the true risk of exposure to Depleted Uranium oxide particles from military training at the Pohakuloa Training Area (PTA). Until such an environmental survey is completed the true risk is really unknown. As long as the risk is unknown the possible exposure is really a human experiment, which must have informed consent prior to and throughout the activity. We the undersigned have never had the chance to give our informed consent to this ongoing experiment at PTA. We ask that all activities that raise dust be suspended while we assess if everyone exposed freely gives consent after being fully informed. These steps are in accordance with US and international ethical requirements for human experimentation.

Albertini has hope the new PTA commander will be more amenable to an open dialogue. Currently, Albertini said they are trying to set up “some kind of visitation at Pōhakuloa with the new Commander Borce, that we’d hopeful go to Pu‘u Kapele where we built an ahu about 18 years ago.”

Lt. Col. Borce said he is open to such a cultural site visit, but there is a process that needs to be followed.

“I want Pōhakuloa be transparent,” Borce said. “I want open communications between the local community and Pōhakuloa. I have nothing to hide at Pōhakuloa.”