HONOLULU, Hawaiʻi - Insights on PBS Hawaiʻi brought together a PGV rep, a HECO spokesperson, a Puna state senator, and an environmental activist for a lengthy - and lively - televised discussion. 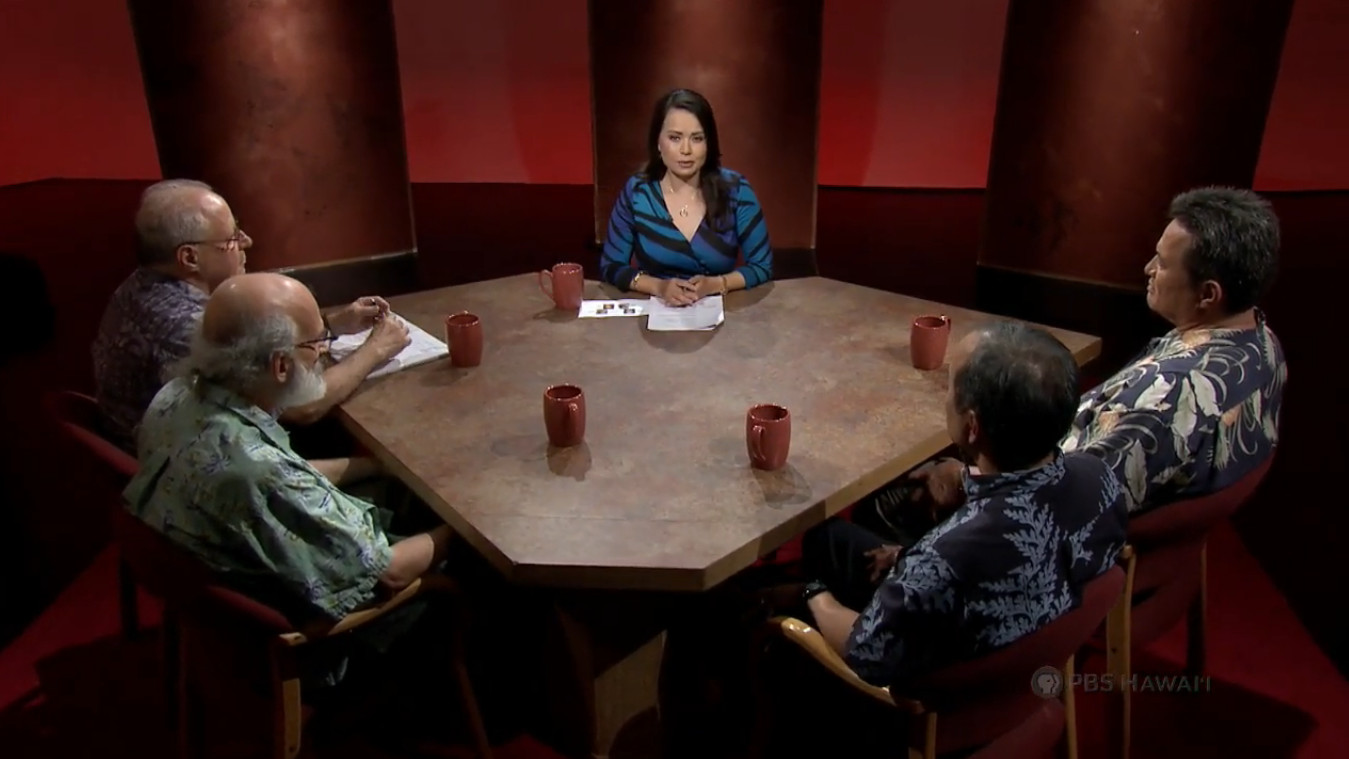 (BIVN) – Viewers of PBS Hawaiʻi recently witnessed a televised debate over the future of geothermal energy production in the volcanic Puna district of Hawaiʻi Island.

The May 23 Insights on PBS Hawaiʻi broadcast entitled Puna Geothermal Restart?, gave opposing views an opportunity to talk about the situation for nearly an hour.

The show aired in the midst of Puna Geothermal Venture’s effort to recover the power plant following the 2018 eruption of Kīlauea Volcano. PGV is working to get the facility back online. Hawaiian Electric subsidiary HELCO – the Hawaiʻi Electric Light Company – has entered into a Rebuild Agreement with PGV.

This month, the Hawaiʻi Public Utilities Commission, or PUC, told HELCO “that an overhead line proceeding and public hearing are required,” before moving forward with the connection. The PUC also encouraged HELCO and PGV to reexamine the terms of their Power Purchase Agreement under a new deal.

Both Ruderman and Curtis shared the concern that PGV is moving ahead too quickly, and that the new, post-eruption geology of the area surrounding the plant needs to first be better assessed.

RUDMERMAN: “There’s a lot of concern about – not so much about PGV reopening but it reopening in a hurry before due diligence has been done to reassess the current situation. It’s obvious that the geology underneath us has changed. Lava flowed through the well field and the physical environment has changed dramatically, which ought to trigger a review of the environmental impact statement. The need for either review or supplemental environmental impact statement, because that’s a major change to a very significant facility.”

Kaleikini seemed open to the possibility of doing a new or supplemental EIS, although he said he does not believe one is mandated.

KALEIKINI: “Those are valid concerns. We take the changes in the geology seriously. We’ve done surveys on some of our geothermal wells. Like I mentioned earlier, we’re removing the plugs to assess the changes or the current conditions. So that is something that we’re very, very serious and safety is number one. It will be number one going forward. Now, we do know that there is a change in the resource. There is actually more heat there. It makes sense, because of the eruption and lava beneath the rift zone. We haven’t noticed, so far, that it’s anywhere near what the original condition of the field was back in 1991 – 1992 time frame.”

DE NIES: “[Sen. Ruderman] is talking about doing a whole new environmental impact statement. Costly and time consuming. Do you have any — what would be your reservations to engaging in something like that?”

KALEIKINI: “Well, you know, if an EIS is required, we definitely would do it. We definitely would. I understand that the there landscape has changed. We’ve had some preliminary discussions with different agencies on the requirement for an EIS. And so far, we have not come across any regulatory requirement to perform one. But that is definitely not out of the picture.” 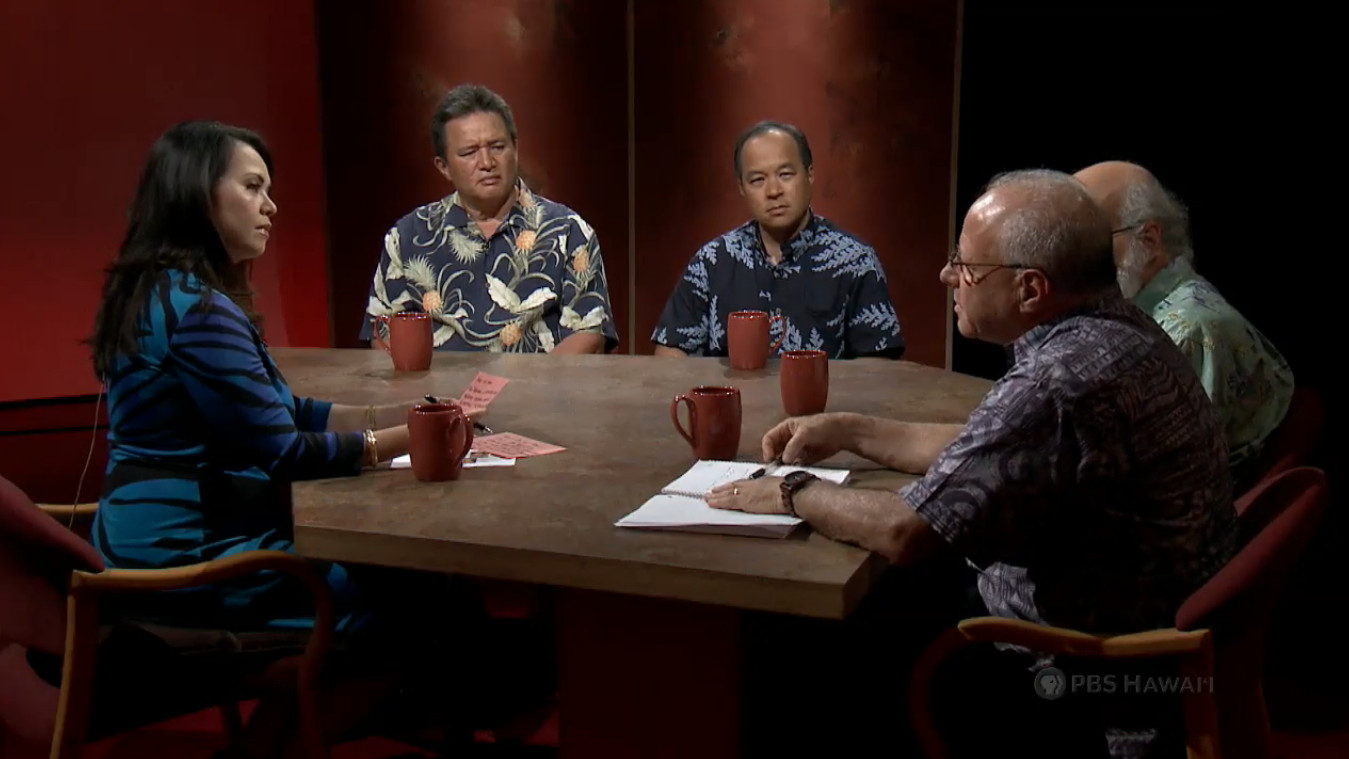 Whether or not HELCO needs the power that will be produced by PGV was another topic of debate. The geothermal plant previously supplied the utility with 30% of the island’s power.

RUDERMAN: “As for the need for the power – we, us consumers, don’t feel that need. HELCO assured us in the very first week that they could be OK without it. Since then, and possibly because of this, we’ve signed two agreements for two major utility scale solar plants with battery backup, which we hadn’t had on the Big Island before. I think it’s partly because PGV went off line, we wanted to restore the renewable portion of our portfolio. Now we have two major solar plants coming on line next year at a much, much lower cost. So if we don’t need electricity, if PGV comes back on line, with its current contract, we will be paying more than if they don’t come back on line. So we don’t feel the need for it, we don’t know whether it’s wise for the rate payers.”

DE NIES: “[Sen. Ruderman] brought up two energy sources. Tell us about that and how that changes the mix?”

SEU: “Let me start here. Right now, we have a mixture of different power generation sources on the Big Island. We have traditional fossil fuel power plants. We have the wind farms up in Hawi, at South Point. And of course, we have PGV. And hydro. We have some in line hydro plants as well. And a significant amount of customer rooftop solar. When we are charting our course forward, we have a mandate we have to get off the fossil fuel by 2045. We are really looking towards procuring – as agressivley as we can – additional renewable energy. So what the senator reffered to as outcome of our first RFP, which started over a year ago, and that’s leading to these projects being contracted for. The PUC has really fast paced the approval of some of these contracts. Thats a tremendously positive advancement. We are already gearing up for second phase of the RFP and we are also going to be pretty aggressive across every single island. One of the things that I always think about is that when we’re going forward, we will need to have a portfolio of different types of renewable power generation. And it will be a significant amount of – probably pv or solar photovoltaics, plus battery storage systems. We’re very happy seeing the pricing coming in on some of those projects. As a former system operator, I don’t think that we will be able to have app entire energy system that entirely relies on solar and battery. We have to have a mix of other generation sources that can provide power, 24 hours, 24/7. So I think that while we are very, very happy at having these two solar farms coming on line pretty soon and hopefully, even more in the future, we will always need that mixture firm generation sources, firm renewable generation sources, so I just wanted to flag that. The costs of these new contracts are very attractive. No doubt. One of the things that we are very, very focused on is working with Mike, working with PGV, to see about renegotiating the contract that we purchase their power. Our goal is to lower the cost of that contract. I don’t want to put Mike on the spot, but that’s our expectation. Our PUC has expressed very clearly they would like to see the contract de-linked from fossil fuel costs, bring it down to level with other competitive renewable sources. That’s what we are currently in negotiation.”

Henry Curtis had more to add to the discussion on renewable energy alternatives, which led to mention of Hū Honua, the biomass facility that hopes to produce energy by burning trees at its facility in Pepeʻekeo. The PUC approval of the Power Purchase Agreement between HELCO and Hū Honua was just vacated by the Hawaiʻi Supreme Court, based on an appeal filed by Curtis and Life of the Land that argued the PUC failed to expressly consider the reduction of greenhouse gas emissions in its decision-making.

CURTIS: “The second round of the request for proposals is underway. HECO is arranging to get new solar on Molokaʻi, Lanaʻi, Oʻahu, and Maui. They have suggested that what happens with Hū Honua and what happens with PGV, may affect the need to put new solar in on the Hawaiʻi Island. So they’re putting in to the RFP that they want developers to suggest renewable energy alternatives for the Big Island, additional ones. So it’s not a question of, if we get rid of geothermal, we don’t have enough renewables. We have enough renewables on Big Island so we don’t need anything else.”

SEU: “I would respond to that, Curtis. We are going forward with our RFP. Our stage 2 RFP. And we are definitely working with that contingency: what if Hū Honua doesn’t get built or come online, what if PGV is unable to come back on line. That’s what we are covering in that RFP. Its still early. We haven’t issued that RFP, yet. We still have to go through the process an get that.”

CURTIS: “Its like, July, that you’re gonna release it – or something within that time frame?”

SEU: “It will be released in this year.”

Towards the end of the program, the discussion veered into whether or not Puna Geothermal Venture operations on the East Rift Zone may have contributed to the volcanic events of 2018. Ruderman cited a Tufts University study, “Fracking: Earthquakes are triggered well beyond fluid injection zones: Computer model and field experiment data suggest a new link between subsurface injections and earthquake swarms” published on May 2, 2019 in ScienceDaily.

RUDERMAN: “Iʻm going to be highly criticized for saying this. I believe that before we go forward, we should have a real analysis of whether there was any relationship between the 30 years of injection of fluid that they have been doing, and the location and intensity of last year’s eruption. It has not been disproven that those two are related. What we saw was an eruption, that was unlike any we’ve seen before. Much hotter, much more fluid, much more fast moving, with 24 fissures erupting in an area within about a mile of PGV. There’s a 20-mile rift zone. If you just did a probability analysis, what’s the chances 24 fissures erupted within a mile of PGV, by coincidence? That probability is one in a million. We have had a lot of research on the effects of fracking, of which fluid reinjection is form of fracking. This month, Tufts University came out showing fracking – including fluid injection – causes seismicity, earthquakes and fractures for miles around it. They’ve been doing this. And we see a line of fissures, right along their property line. Aren’t we going to — are we really going to move forward, before answering the question: did this activity contribute at all to the nature and intensity of last year’s eruption? I believe that question needs to be answered before we go forward.”

DE NIES: “Who can answer that question?”

KALEIKINI: “I can help out. The USGS actually responded to what you just saying. For me, it’s totally – with all due respect – it’s absurd that PGV had any contribution to this eruption. The scientist-in-charge, Ms. Tina Neal, she actually put out a nice write-up about how the earthquakes travel down from Halemaʻumaʻu, down through Puʻu ōʻō and along the east rift. They track it. It’s scientific. Also, in 1955, PGV wasn’t there. In 1960, PGV wasn’t there.”

RUDERMAN: “And there was one fissure erupted then?”

KALEIKINI: “No, there was a bunch of fissures, not just one. In the 1800’s there was eruptions. There’s going to be more eruptions. Whether PGV is there or not.”

RUDERMAN: “I was in the room when someone asked USGS this question. They said the lava looks for cracks and weak spots and they said, ‘are you aware of the reinjection going on there?’ No one answered that question. From that point on, USGS has been silent on this subject. I think it needs to be addressed.”

KALEIKINI: “USGS, in my opinion, has provided a sound scientific explanation about this 2018 eruption. So I’d be happy to share that report with you.”

RUDERMAN: “I’ve seen that. I’m not saying you caused the eruption. I’m saying location and intensity could well have been influenced by the reinjection you’ve been doing. It has not been disproven. It has not been objectively analyzed yet.”