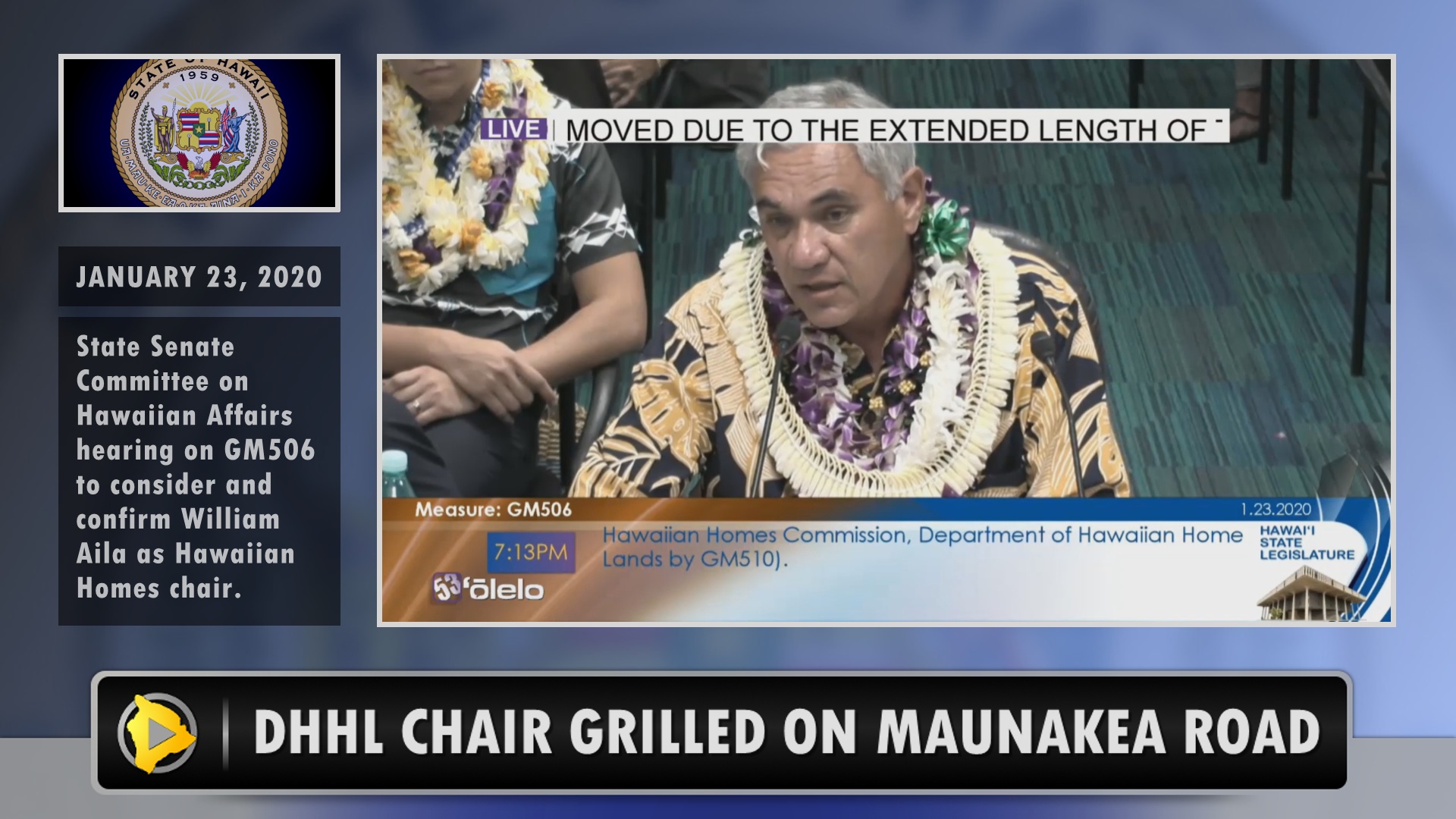 HONOLULU, Hawaiʻi - DHHL chair William Ailā gave an update on the "final adjudication and compensation" for the contentious road leading to the summit of Maunakea.

(BIVN) – State senators had William Ailā on the hotseat concerning the Mauna Kea Access Road during Thursday’s committee hearing on his nomination to continue as chair of the Hawaiian Homes Commission.

The Mauna Kea Access Road is a critical component in the ongoing standoff over the Thirty Meter Telescope project planned for the mountain. For half of 2019, opponents of the observatory – many of whom are Hawaiian Homes trust beneficiaries – situated their kūpuna tent on the road in order to prevent construction crews from reaching the project site. Ailā’s handling of the complicated issue has been criticized by beneficiaries, as detailed in some of the written testimony opposed to his nomination. For example, as Keaukaha Panaʻewa Farmers Association president Maile Luʻuwai wrote:

At an August 19, 2019 Senate briefing, Bill Aila admitted to Senators that DHHL still owns the land under the Maunakea Access Road. Two weeks later, on August 30th, Bill joined the Attorney General’s office and the Department of Transportation to issue a joint press release stating that the road was under “DOT jurisdiction” and that the “Beneficiaries of the Hawaiian Homes Commission Act of 1920 do not own Mauna Kea Access Road”. HAR-264-2 requires that the State DOT own public roads and highways in fee simple. DOT does not own the land under the Maunakea Access Road, and thus it does not have jurisdiction. Law 100.

If you understood your trust responsibilities as DHHL Chair, would you release a statement that was false and misleading? We get it coming from the Governor, but not from the DHHL Chair. Irregardless of one’s position on TMT, false and misleading statements coming from someone who is charged to work on behalf of the DHHL land trust and its beneficiaries is unacceptable. For months, the Ige Administration waged a deceptive public TMT media campaign and Bill appeared locked in step with the Governor’s manipulated distortion. You must have seen it.

Ailā had the chance to clarify his position on Thursday during his confirmation hearing before the State Senate Hawaiian Affairs Committee.

“We’re not operating the road,” Ailā said. “The [Department of Hawaiian Home Lands’] position is that Mauna Kea Access Road… is under the operational jurisdiction of the Department of Transportation. If you look, I think you’ll find that it’s actually in its inventory. The land under the road still belongs to the Department of Hawaiian Home Lands. The final adjudication and compensation for that illegal building of the road… because the road was built while Parker Ranch was still the lessee of the land… that compensation is awaiting our hiring of an independent counsel, and then in the independent counsel will review the appraisal process and come up with what is a fair appraisal according to an independent third party.”

“Already, as you can see from some of the testimony, my judgment is clouded in terms on this road and what it’s worth,” Ailā continued, “and the final implementation of Act 14. So once that’s done, then we will go back to the other state agencies that actually have responsibility for the compensation and try to achieve some sort of compensation.”

“So for me and you,” said State Senator Kurt Fevella, a 19th district Republican who has been critical of DHHL’s handling of the Maunakea situation, “if we don’t make things right in 30 years, don’t you think everything that was said in 1996 going forward should have been voided?”

Ailā agreed that “under contract law, then that assessment would probably correct. But this is a legislative settlement, so it’s not contract law.”

Hilo State Senator Kai Kahele asked if Ailā is of the opinion that beneficiary consultation should happen today, “because it is such a highly visible and deeply polarizing issue?”

“Yes, a beneficiary consultation, I think, is something that is appropriate at the time,” Ailā answered. “I think when the evaluations are completed,” he added.

“Do you think the DHHL should give up their rights to land that the road sits on,” asked Kahele, “rather than keep it in its inventory and use the revenue that it could generate to help Maunakea, or ʻAina Mauna lands?”

Ailā said that “from a fiduciary standpoint,” taking back the road “doesn’t balance out. And that’s not just my decision; that’s that’s the opinion of many commissioners.”

“I personally want to be on record that I don’t think the Commission or the DHHL should ever relinquish control of the Mauna Kea Access Road,” Kahele said.

The committee said it will return later this month with a decision on whether or not to recommend Ailā to lead the department.