Video courtesy USGS – Hawaiian Volcano Observatory | Voice of Tim Bryan It was a historic weekend on Kilauea Volcano, as the current eruption made a sudden, dramatic change. By Monday morning, the floor of Pu‘u ‘O‘o vent had collapsed, a spectacular new fissure had ripped open on the middle East Rift Zone, and the lava […] 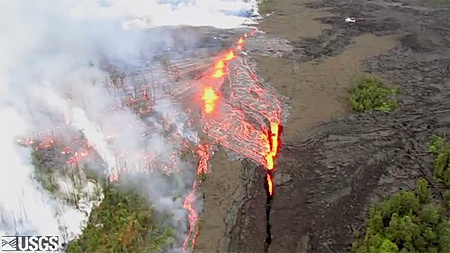 By Monday morning, the floor of Pu‘u ‘O‘o vent had collapsed, a spectacular new fissure had ripped open on the middle East Rift Zone, and the lava lake at Halemaumau Crater had nearly drained out of site.

On Friday, Kilauea entered the weekend as it had over the course of the last few months. This video from March 3 is one of a series of collapses that day, much like those than occurred in January and February. This shot was compiled from the Webcam on the rim of Halema`uma`u above the vent, and shows the northwest rim of the vent falling into the lava lake.

Meanwhile, at the other eruption site farther down the east rift, Pu‘u ‘O‘o crater was active with channelized lava flows. Pu‘u ‘O‘o has been erupting since 1983, and the appearance of that eruption has changed over those years. This composite image demonstrates the most recent activity at the crater, with no indication of the massive changes to come.

But things changed on Saturday.

Within a half an hour from that point, the floor of the Pu‘u ‘O‘o crater began to collapse, and before long, lava and incandescent rubble appeared in the crater. A large block along the east crater wall collapsed, which produced a dust plume.

At that same time, an earthquake swarm began along Kilauea’s middle east rift zone in the area of Maka`opuhi and Napau Craters. An HVO geologist flying over the area reported “an eruption in Napau Crater”, although it was later realized that a fissure had instead ripped open the earth between Napau Crater and Pu‘u ‘O‘o.

Activity at this new fissure was sporadic over the next few days, with periods of quiet punctuated by episodes of lava spattering up to 80 feet high.

HVO’s Scientist-in-Charge, Jim Kauahikaua, said the event is remarkably similar to a 1997 eruption in and near Napau Crater, which lasted less than 24 hours.

Meanwhile, at the Kilauea summit, the lava lake level within the Halema‘uma‘u Crater vent dropped rapidly, facilitating rockfalls from the vent wall, and nearly disappearing from the view of the camera positioned on the overlook.

We’ll have more on this incredible change of events this week, and we’ll have more of some of the amazing video that has been seen all over the world… and the daring videographers who filmed it.