Maybe its just the love for American democracy that fills the air this time of year, but things seemd a little... political. 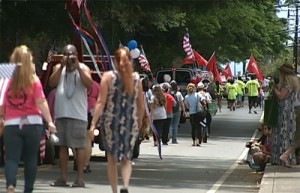 NAALEHU, Hawaii: Daniel Johnasen has been coming to the Naalehu Independance Day Parade for years. Born and raised in Ka’u, Johnasen says its always been a good event; worth finding a good spot for, early in the day, before it gets too hot, like his wife Emma did.

But this parade is a bit unusual. Maybe its just the love for American democracy that fills the air this time of year, but things seemd a little… political.

Area resident Lee McIntosh is the organizer of the march down mainstreet.

Of course, Lee is himself a familiar face come election time. He is running for the County Council, District 6 – along with councilwoman Brenda Ford, Maile David, and Bradley Westervelt, all of whom were in the parade, too.

Religion and politics. Allegedly, none of which appeal to the animated Adriana, selling Mexican food along the parade route.

And for Uncle Daniel Johnasen and the ohana, the highlight was the Hawaii County Band. His grand daughter plays the french horn.