HILO (BIVN) - The first witnesses are called as the state tries to make a case against the Mayor of Hawaii County, who allegedly used his government issued purchase card for personal expenses... and lots of alcohol. 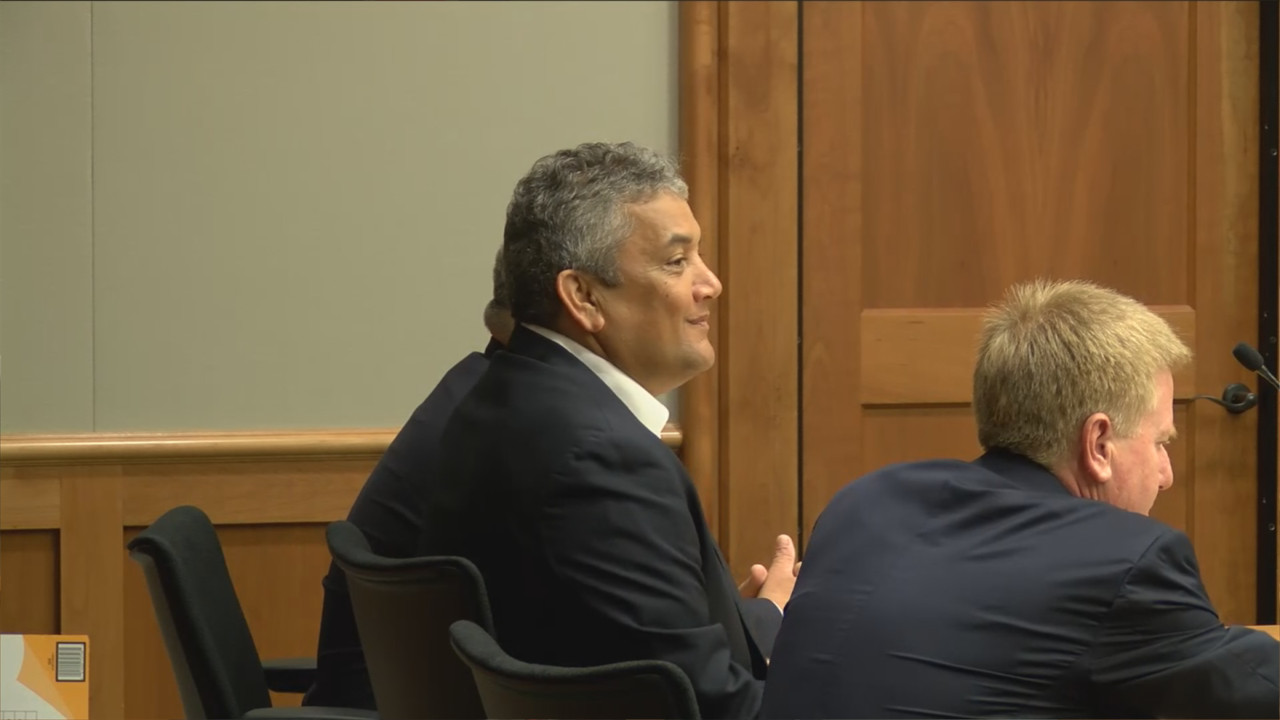 Mayor Billy Kenoi smiles in Hilo court before the opening statements are presented.

HILO, Hawaii – Opening statements were delivered to a jury of seven women and five men on Tuesday as the criminal trial of Mayor Billy Kenoi got underway in Hilo Circuit Court.

The State of Hawaii alleges the Hawaii County mayor stole public funds when he used his government-issued purchase card for personal expenses.

“It was expected that he would follow rules,” Puu said, “not operate as though he is above them.”

Puu described for the jury the 8 counts the mayor faces.

Of the remaining 4 counts, 3 are tampering with government records, and the other is false swearing.

In an attempt to prove its case, the state points to 15 transactions totaling $4,129.31. Puu detailed the quantity and variety of liquor purchased by the mayor in some of those transactions.

But Kenoi’s defense attorney Todd Eddins countered in his opening statement that Kenoi “absolutely believed that his entertainment expenses were proper CEO expenses within his discretion.”

“There was no intent whatsoever to permanently deprive the county of its money”, Eddins said, drawing out on a large easel in the courtroom that $3,929.31 of the $4,129.31 was repaid by the mayor. The remainder – a $200 bill at Volcano House restaurant to entertain the family of the “long-time head” of the U.S. Conference of Mayors – was a legitimate county expense, he said.


“Mayor Kenoi is a big hearted, big picture, Big Island heart and soul guy,” Eddins declared. “He’s not a thief. He is not guilty.”

The first witness to take the stand was the newspaper reporter who broke the story of Kenoi’s p-card spending in March 2015.

West Hawaii Today’s Nancy Cook Lauer, who has become a part of the story she once reported on, testified on her February 2012 requests to the county finance department for “records of p-cards or equivalent credit card statements for the mayor and all county department heads and all executive assistants.”

Instead, she was given an administration curated summary document that omitted a number of questionable transactions in 2011.


Four years later, those unmentioned purchases are now a part of the state’s case against Kenoi. The attorney general took action after Lauer’s article hit the press and made statewide headlines.

“And all of the transactions in count one were reimbursed after the media demanded records,” Puu said. “Not before.”

Former Finance Director Nancy Crawford was called as the next witness. Crawford underwent intense questioning as to her role overseeing the use of the p-cards, where she admitted that no other employee in county government authorizes the mayor’s purchase of liquor, save for the mayor himself.


Crawford’s testimony shed light into how the county administration would view the spending habits of Kenoi and his purchase card.

For example, when asked about a purchase at Sansei Seafood and Sushi Bar in May 11, 2011 – reimbursed by Kenoi 294 days later on March 1, 2012 – Crawford said, “that looks like a description to me for something that I would consider a legitimate county expense.”


“Because the receipt was for liquor, I wouldn’t automatically say that it was not a legitimate county expense,” Crawford said.

The trial continues on Wednesday.