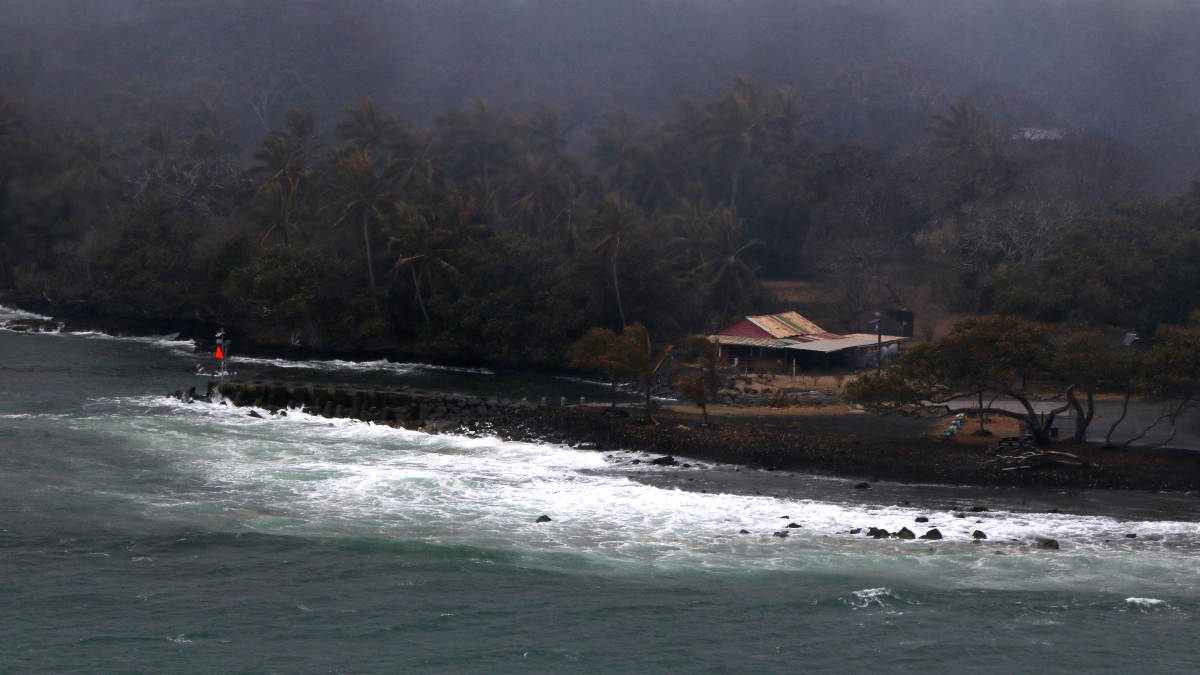 HAWAII ISLAND - Today, the state teamed up with the US. Coast Guard to look for any green sea turtles that could be trapped by lava flowing into the ocean. 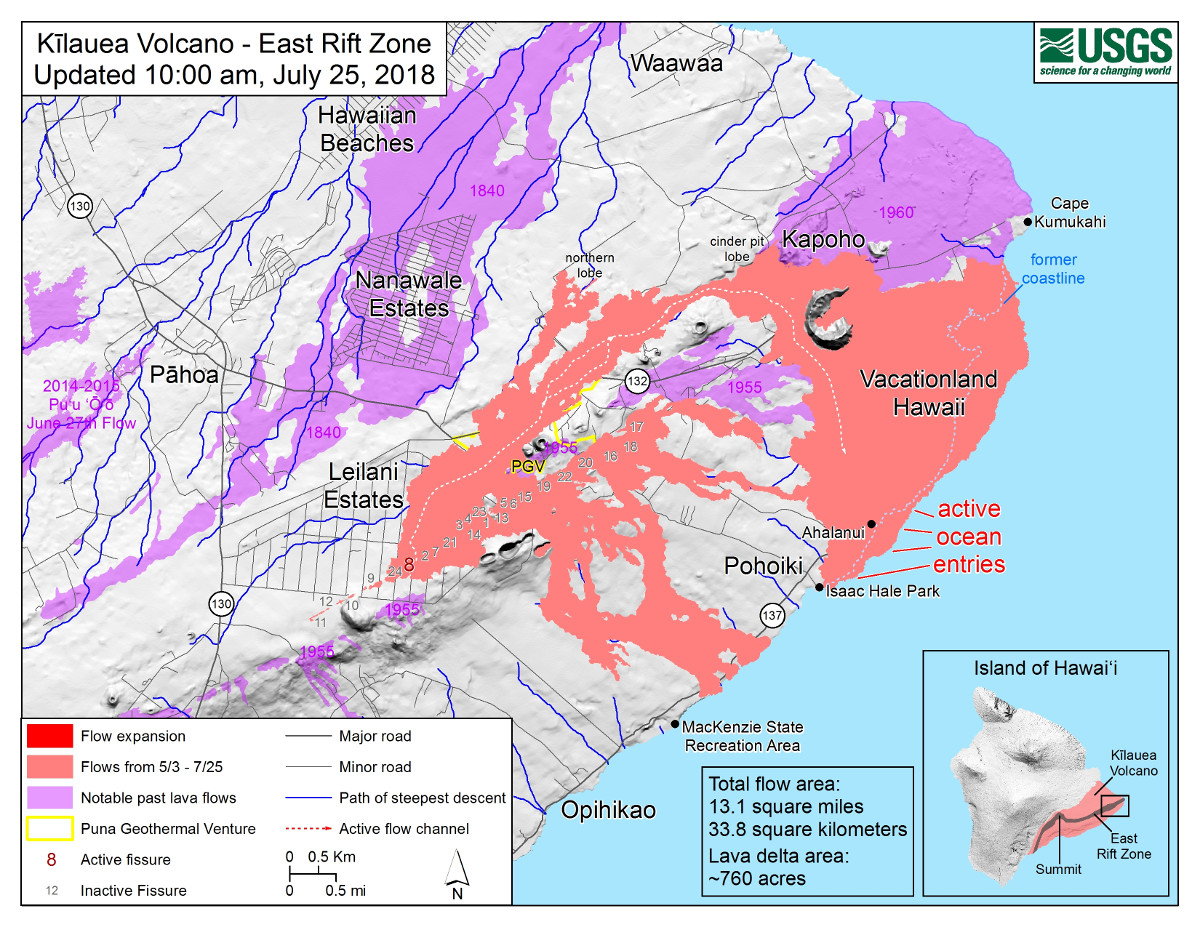 (USGS) As of 10:00 a.m. HST, July 25, 2018, the lava flow margins had not expanded since the previous map, so no red areas (indicating expansion) appear on this map. Given the dynamic nature of Kīlauea’s lower East Rift Zone eruption, with changing vent locations, fissures starting and stopping, and varying rates of lava effusion, map details shown here are accurate as of the date/time noted. Shaded purple areas indicate lava flows erupted in 1840, 1955, 1960, and 2014-2015.


(BIVN) – There was little advancement of the westernmost lava ocean entry earlier today, and lava was measured at approximately 145 m (475 ft) from the boat ramp at Isaac Hale Park, the USGS Hawaiian Volcano Observatory reported.

Fissure 8 continues to erupt lava into the perched channel, sending flows to the ocean at Ahalanui and creating a large laze plume, Hawai‘i County Civil Defense said at 4 p.m.

Earthquakes continue at Kilauea’s summit and the Hawaii Department of Transportation requests motorists on Highway 11 between mile marker 28 and 32 stay on the pavement and be alert for changing roadway conditions.

While disaster assistance remains available island-wide to individuals and businesses that have been affected by the Kilauea eruption, the location of the Disaster Recovery Center will soon change.

The center, currently located at the Kea‘au High School Gym, is moving to the Pahoa Neighborhood Facility (15-2908 Pahoa Village Road) beginning Monday, July 30. It will be open on weekdays from 8 a.m. to 6 p.m., Saturdays from 8 a.m. to 4 p.m., and closed on Sundays. The DRC now at Kea‘au High School will maintain regular hours before ending operations on Saturday, July 28 at 4 p.m.

The Hawai‘i Department of Land and Natural Resources issued another media release about sea turtles on Wednesday, following continued criticism that the DLNR’s Division of Conservation and Resource Enforcement has devoted more resources to busting lava loiterers than rescuing honu from boiling in lava ocean entries. In the release, DLNR reported on how it teamed up with the U.S. Coast Guard to inspect the Puna coastline for turtles threatened by lava:

(Honolulu) -The U.S. Coast Guard Barbers Point Air Station provided space on a low-flying C-130 plane to DLNR representatives today to look for any green sea turtles that could be trapped by lava flowing into the ocean on the coast near Kapoho Bay and the Pohoiki Boat Ramp.

To the naked eye no turtles were visible. Ocean conditions are such that seeing turtles is next to impossible. Ikaika Marzo, a permitted lava tour boat operator and cultural practitioner from the Puna area, said, “It would be very difficult to save turtles anywhere along the coastline at this point. The water is so turbid and murky that it would be hard to even spot them up-close from the shoreline. The time has passed.” Experts from NOAA Fisheries and DLNR say even if teams could have reached turtles depicted in social media postings, relocating these wild animals is fraught with challenges. Those include difficulty in capturing turtles in the ocean even by trained experts, lack of safe access by land or sea, risk of harm to turtles during capture, and no guarantees that turtles who have very strong home territory instincts wouldn’t swim back after being relocated.

Today’s overflight is the third mission in the past ten days initiated by DLNR to look for turtles in distress or in danger from the lava flow ocean entry in Puna. Researchers believe many turtles – those that had clear paths to the ocean — swam away from the area. Various social media postings, some from early June, indicate turtles that were apparently trapped and/or killed during an active ocean lava entry or in landlocked pools.

“We’re charged with the mission of protecting Hawaii’s natural resources and we obviously share everyone’s concerns and sadness over the loss of turtles and any other aquatic and terrestrial wildlife,” said DLNR Chair Suzanne Case. She added, “The eruption is obviously powerful and dangerous to both humans and wildlife.”

Anyone who sees turtles or other animals trapped by lava (outside the restricted disaster zone) is encouraged to report it immediately to NOAA’s statewide turtle stranding hotline 1-888-256-9840. You can also report it via the DLNR hotline at 643-DLNR.

Chair Case concluded, “As much as we’d like to rescue and save each creature impacted by the East Rift Zone eruption, much of it is simply beyond all of our control. The restricted zones are necessary for public safety. I really encourage everyone to respect and stay out of areas that are off limits as established by the Hawaii County Civil Defense Agency and the U.S. Coast Guard.”

As of 2pm today the Pohoiki Boat Ramp had not been covered by advancing lava. Visibility beyond the ramp into Isaac Hale Park was severely restricted by volcanic gasses and steam.