Puna Councilman Fred Blas withdrew a proposal for an emergency shelter and submitted another for a Lower Puna Community Relief Center during Thursday's council meeting. 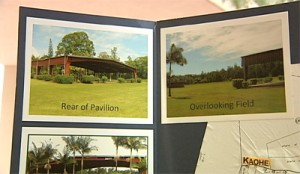 A look at Leilani's plan

HILO, Hawaii: Perhaps the most interest in Thursday’s Hawaii County Council debate centered around amendments to the $172 million Capitol Improvement Project budget, which is mostly just a “wish List” maintained for future projects.

Puna Councilman Fred Blas withdrew a proposal for an emergency shelter and submitted another for a Lower Puna Community Relief Center. The idea is to refurbish the pavillion in Leilani Estates for an estimated $200,000 dollars, in order to provide a centralized place for the community of Puna makai, where advocates for the project say it is needed.

Hawaii County Civil Defense did not oppose the proposal. Councilmembers, some of whom were wary of the proposal in its first incarnation, were now supportive.

Council Chair Dominic Yagong wondered about the legality of the partnership in the private subdivsion. In the past, Yagong has advocated for other issues that cross the public-private threshold in Puna.