This morning’s assessment shows the surface lava flow continues towards the northeast and has advanced approximately 400 yards since yesterday. The active edge of the surface flow is moving through the upper northwest corner of the Kaohe Homesteads and across vacant forested parcels. The leading edge or front of the flow has narrowed and is approximately 50 yards wide. Currently the flow does not pose an immediate threat to area communities and area residents will be given adequate notice to safely evacuate should that be necessary.

There is no brushfire threat at this time and all burning is limited to the vegetation that is in direct contact with the flow. Smoke conditions were moderate to heavy this morning over the Kaohe area and may vary depending on wind conditions. Weather forecasts for the next few days indicate winds will continue with light trades out of the east/northeast and possibly resulting in smoke conditions over the Pahoa area.

Construction activities on the Railroad Avenue and Government Beach Road are continuing. These activities are to establish alternate road access in the event Highway 130 is affected by the lava flow.

The public is reminded that the flow cannot be accessed and is not visible from any public areas. Access to the Kaohe Homesteads subdivision will be restricted and limited to subdivision residents only. Everyone’s cooperation and assistance is greatly appreciated. Hawaii County Civil Defense on September 18th at 8:30 a.m.

A short time later, the USGS Hawaiian Volcano Observatory followed up with their own update:

The June 27th lava flow remains active. An HVO overflight yesterday afternoon observed that the flow continues heading in a northeast direction through thick forest in the northwest portion of Kaohe Homesteads. The flow front had advanced at an average rate of 290 m/day (960 ft/day) between Sep 15 and 17, which is slightly higher than the advance rate of 215 m/day (705 ft/day) between Sep 12 and 15. The leading tip of the flow has narrowed over the past several days, and was 90-140 m wide (300-460 ft) – this narrowing may be related to its increase in advance rate. The flow front was 16.0 km (10 miles) from the vent, measured in a straight line. The actual length of the flow, measured along the lava tube axis (so that bends in the flow are considered) was 18.3 km (11.4 miles). The flow front yesterday afternoon was 2.7 km (1.7 miles) upslope from Apa`a Road. The flow front is still in thick forest, creating smoke plumes as it engulfs trees and other vegetation, but fires are not spreading away from the flow.USGS Hawaiian Volcano Observatory 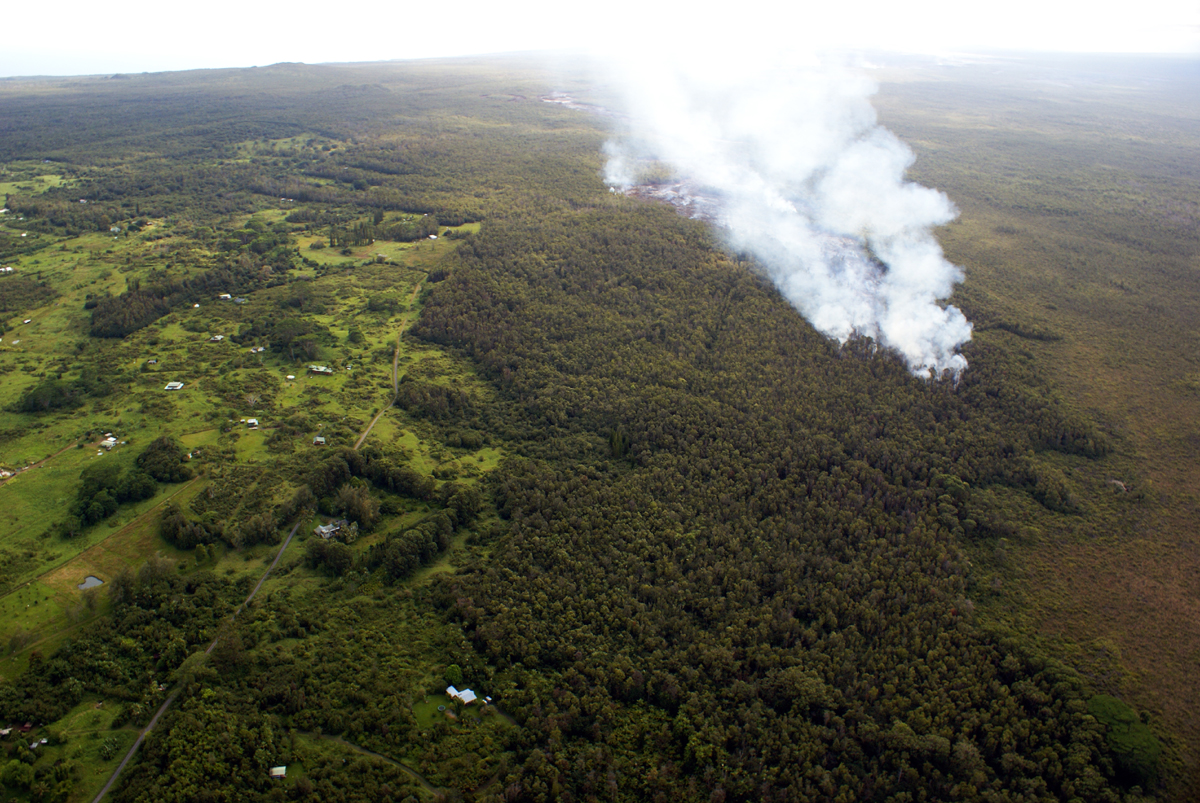 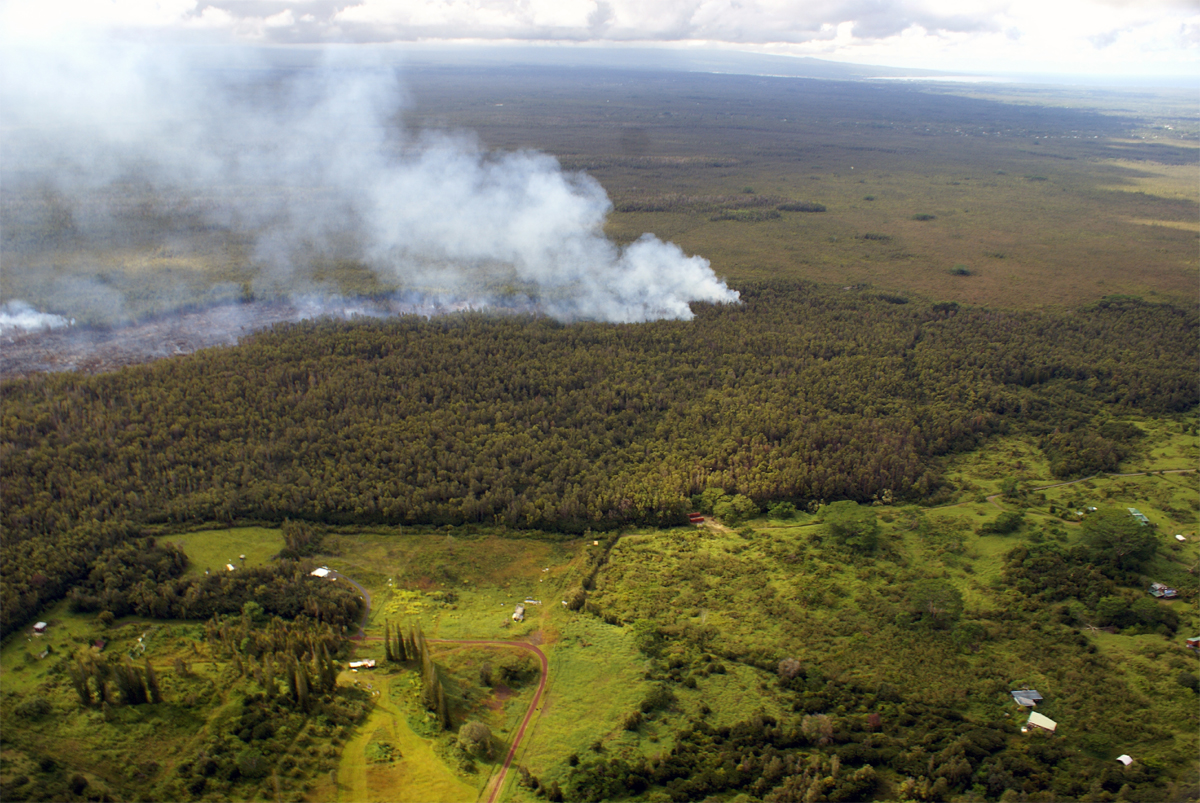 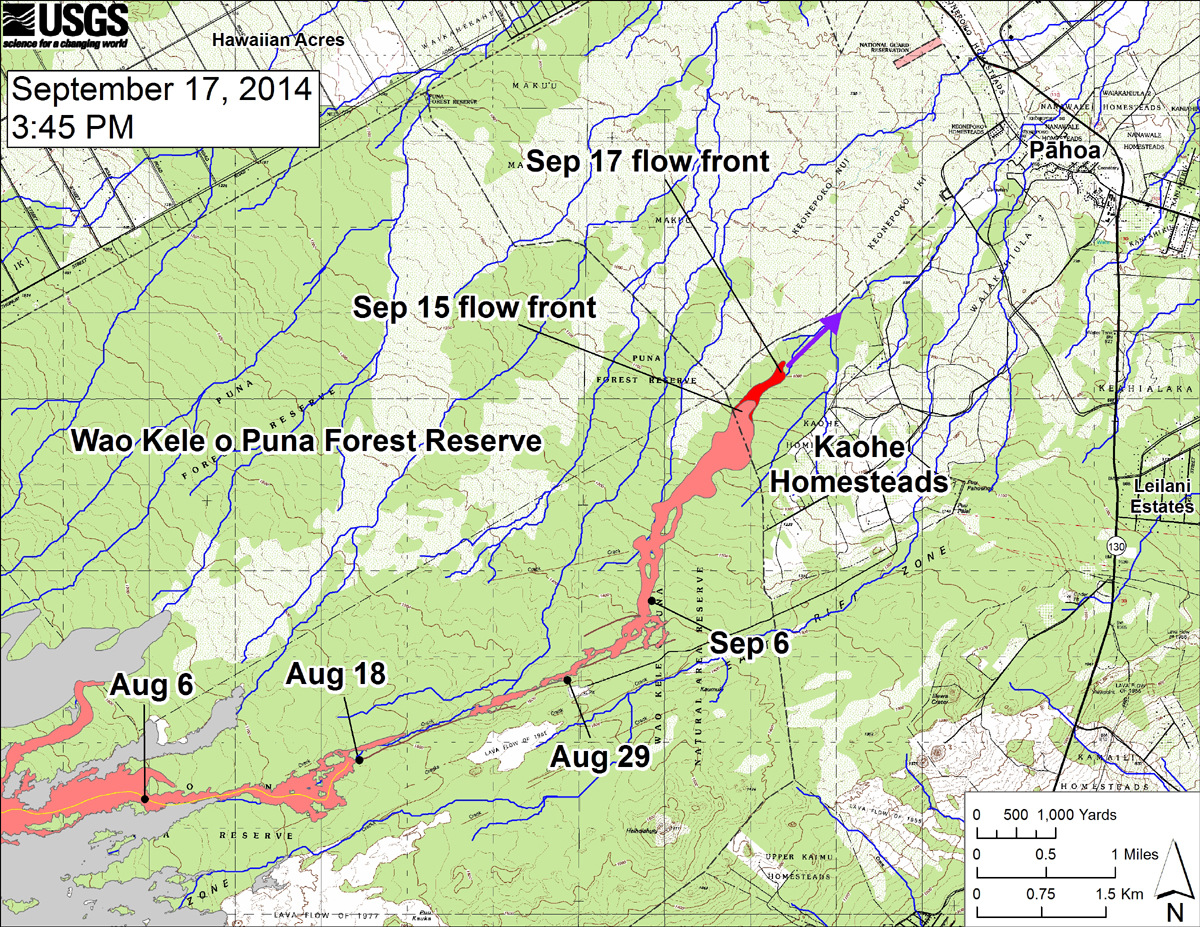 USGS HVO: “This large-scale map shows the distal part of the June 27th flow in relation to nearby Puna communities. The black dots mark the flow front on specific dates. The latitude and longitude of the flow front on September 17 was 19.4737016 /-154.977834 (Decimal degrees; WGS84). The blue lines show down-slope paths calculated from a 1983 digital elevation model (DEM; for calculation details, see http://pubs.usgs.gov/of/2007/1264/). Down-slope path analysis is based on the assumption that the digital elevation model (DEM) perfectly represents the earth’s surface. But, DEMs are not perfect, so the blue lines on this map indicate approximate flow path directions. The purple arrow shows a short term projection of flow direction based on the flow behavior over the past several days and the local topography.”