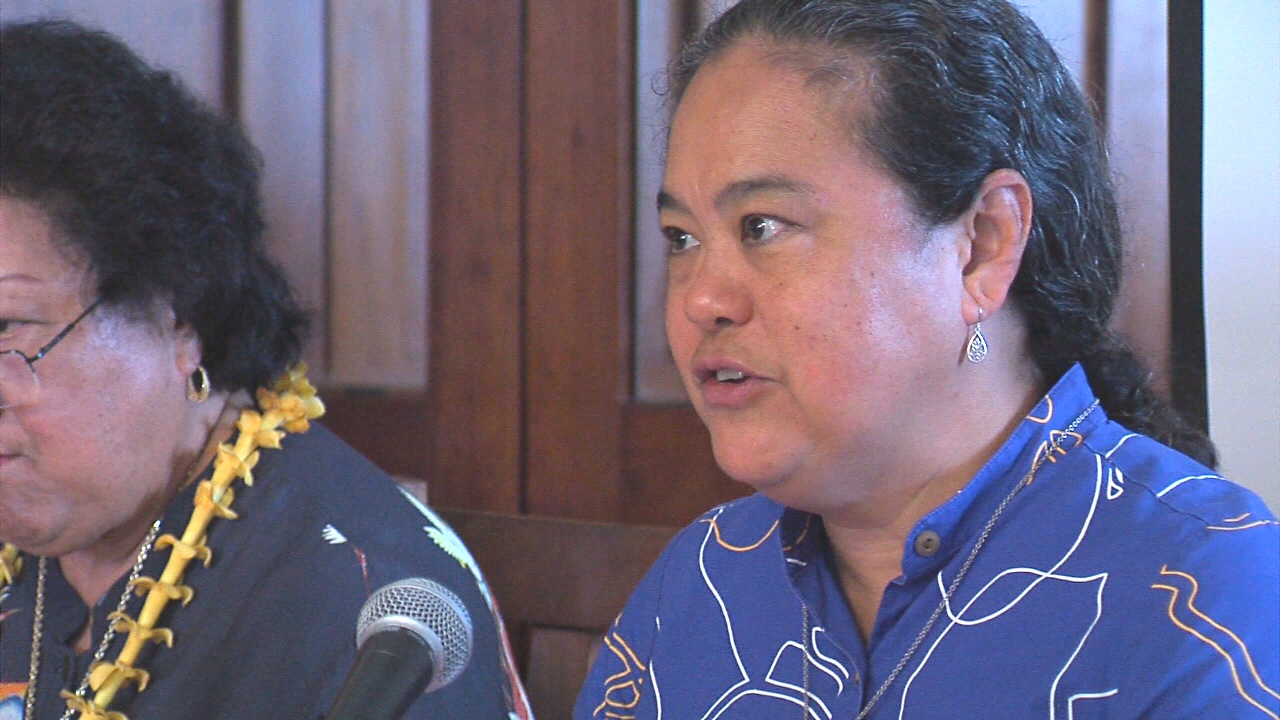 image of Jobie Masagatani from file video by BIVN

HONOLULU - Governor David Ige on Wednesday announced that he is reappointing the director and deputy at Department of Hawaiian Home Lands.

(BIVN) – The two top executives charged with administering the Department of Hawaiian Home Lands will be returning to lead DHHL into the new year.

On Wednesday, Governor David Ige announced that he is reappointing Jobie Masagatani as DHHL director and William Ailā, Jr. as deputy. Both reappointments are subject to Hawaiʻi State Senate confirmation.

“This leadership team has made significant progress in awarding homesteads by embracing a combination of traditional lot development and pilot programs that provide alternatives such as rent-to-own projects and subsistence agricultural homesteads,” said Governor Ige in a media release. “They are committed to completing and awarding 374 lots in 2019 and 1,300 additional lots currently in the pipeline to be developed over the next five years.”

Jobie Masagatani will be retained as chair of the Hawaiian Homes Commission and director of the Department of Hawaiian Home Lands, a position she’s held since May 2012. Prior to her appointment at DHHL, Masagatani was special assistant to the chief executive officer at the Office of Hawaiian Affairs (OHA). Before serving at OHA, she owned a small consulting practice and was also an assistant to the President and CEO of The Queen’s Health Systems, where her area of focus was Native Hawaiian health. Masagatani previously served at DHHL as the Deputy to the Chairman from 1995 to 2002 and served as a Land Investment Analyst for Kamehameha Schools. She earned a master’s degree in public affairs/urban and regional planning from Princeton University and holds a B.S. degree in education from Northwestern University.

“I am very appreciative of the governor’s support, and I look forward to continuing the positive steps we have taken at DHHL to achieve Prince Kūhiō’s vision of ʻĀina Hoʻopulapula and to advance our mission to manage the Hawaiian home lands trust effectively and to develop and deliver land to native Hawaiians,” said Masaganti.

After an unsuccessful bid to be elected to the Office of Hawaiian Affairs Board of Trustees, William Ailā will also return to his role at DHHL. The state says:

William Ailā, Jr. will also be continuing in his role as the deputy director to the chairman at the Department of Hawaiian Home Lands, a position he’s held since 2014. He is the former chairman of the Department of Land and Natural Resources and served as the Harbor Agent for the Wai‘anae Boat Harbor from 1987-2010. In addition, Mr. Ailā has participated on several boards and task forces centered around native Hawaiian rights and natural resource management including the Hawai‘i Invasive Species Council, Mohala I Ka Wai, Hui Malama ‘O Makua and others. Ailā holds a B.S. degree from the University of Hawai‘i at Mānoa.

“I am proud of the work Chair Masagatani and I have been able to accomplish these past years, and we have much to look forward to as we continue to advance new projects for our homesteaders and applicants,” said Ailā.

Governor Ige also announced the return of Douglas G. Murdock to a leadership role in the administration, as chief information officer for the Office of Enterprise Technology Services. Cathy Ross has been appointed first deputy at the Department of Health. Both Murdock’s and Ross’ appointment are subject to senate confirmation.