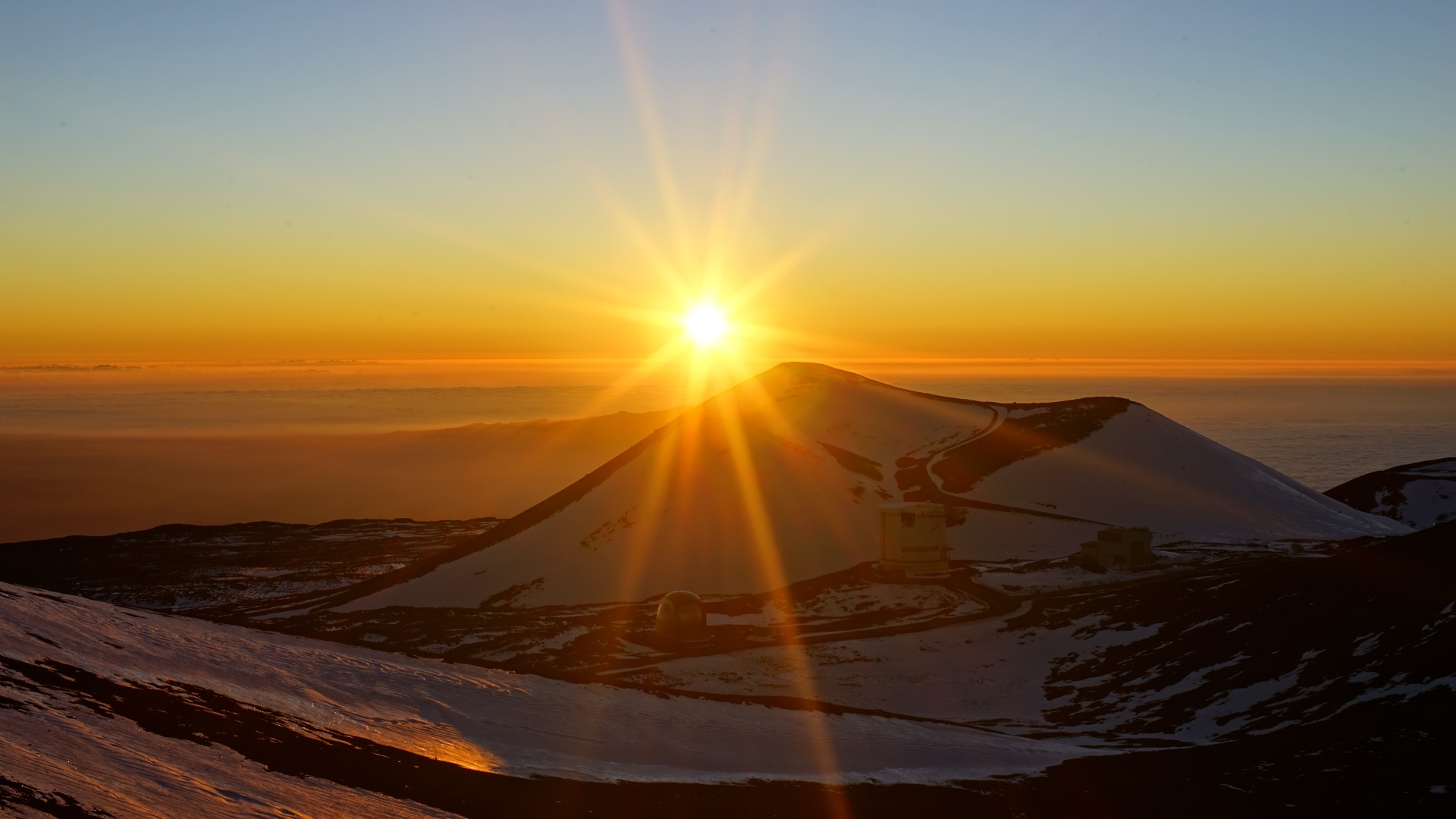 photo from the summit of Mauna Kea, courtesy the Maunakea Observatories

HONOLULU, Hawaiʻi - The Thirty Meter Telescope controversy will be a major topic of discussion during the four-day conference being held at the Hawai‘i Convention Center on Oʻahu.

(BIVN) – The future of astronomy on Maunakea is a big topic of discussion on Oʻahu this week, where the 235th meeting of the American Astronomical Society, or AAS, is taking place.

The AAS is said to be the major organization of professional astronomers in North America, and its meetings are described as the “Superbowl” of astronomy. More than 3,500 scientists are expected to attend the four-day conference that ends on January 8.

Concerns over “potential effects of the ongoing controversy over the observatories on Maunakea, including the planned Thirty Meter Telescope” were specifically addressed by the AAS in advance of the Honolulu meeting.

“The astronomical community is torn by the debate about whether the Thirty Meter Telescope (TMT) should be built on Maunakea. Even inside my own head I am torn,” wrote AAS President Megan Donahue in July, as the standoff on the Mauna Kea Access Road between law enforcement and TMT opponents was in full swing. “As a human being, I feel sorrow for the historical mistreatment of indigenous Hawaiians, and as an astronomer I hope for a peaceful outcome that gives Hawaiians and other inhabitants of planet Earth an extraordinary new view of our universe,” Donahue wrote.

On the 742 page Meeting Abstracts for the 235th session, the term Maunakea appears often.

For example, one discussion – part of a “TMT in the Community” series entitled “Addressing Common Misconceptions and Seeking Common Ground” – is described:

Discussing the Thirty Meter Telescope on Hawai’i Island is challenging due to widespread misunderstandings about the project. In this presentation, we discuss some of the common misconceptions about TMT — including its size, location, and environmental impact — and community efforts to explain how the project addresses these concerns. To many in the community, TMT has become symbolic of far larger issues, especially those predating the start of astronomy on Mauna Kea, including self-determination and proper stewardship of and respect for sacred spaces. We discuss conditions attached to TMT’s permit and plans put forth by governmental leaders that address at least some of these issues.

TMT supporters also offer such talks as “Cultural and Educational Initiatives by the Thirty Meter Telescope”, “Investing in the Future of Hawaiʻi, STEM Outreach Initiatives Supports Opportunities for Locals in Community STEM Careers”, and “The THINK Fund as a Key Provider of STEM Opportunities in Hawaiʻi”.

In another Special Session, the “Many Facets of Hawaiʻi Astronomy” will be discussed.

The Special Session will begin with an historical account of astronomy development on Haleakala and Maunakea from the early 1960’s until the present day. This will provide background for the talks which follow as well as context for understanding the opportunities and challenges that face astronomy in Hawaii today.

The Maunakea Scholars and the ‘Imiloa Astronomy Center’s MANU program are featured in the Special Session: “Innovative Collaborations of Integrity with the Hawaiian Community”.

Other perspectives will be offered outside the Hawai‘i Convention Center, as well. On Monday, Drs. Davianna Mcgregor (Ethnic Studies, University of Hawaiʻi Mānoa) and Rosie Alegado (Department of Oceanography, University of Hawaiʻi Mānoa) will “announce the publication of papers which are a part of eight Native Hawaiian and minoritized-led manuscripts on the current impact of constructing the Thirty Meter Telescope on Maunakea to the National Academy of Sciences (NAS) professional decadal review of Astronomy.”

According to those organizing the press conference:

Notably, these eight papers presented to the NAS are the first evaluation of the impact of astronomy on non-astronomy communities in Hawaiʻi. Following the press conference, which will include background of contributions to the “Decadal” and potential impacts submission of papers may provide, a listening session hosted by the National Academy of Sciences will be taking place within the conference with time reserved for Indigenous voices to contribute.

The release of this manuscript intentionally coincides with the American Astronomical Society (AAS) and The Exoplanet Program meetings taking place in Honolulu, HI, to spark thoughtful conversations. Native Hawaiian scientists both within and outside of astronomy circles have fostered nuanced dialogue about Maunakea by providing a Native Hawaiian scientist perspective. Engagement with scientific societies has led many, including Society for Advancing Chicanos and Native Americans in Science (SACNAS) and the Society for Conservation Biology (SCB), to release statements in support of Indigenous relationships with Maunakea. Authors hope the papers released today can be similarly used to help people develop a more informed understanding of the situation at Maunakea.

The papers will be made available online following the press conference. Authors present will provide brief insights into how their work contributes to the narrative surrounding Maunakea. There will be time for questions related to Native Hawaiian and ally-led collective contributions of the Astro2020 Decadal.

The AAS prepared a 2-page Hawai‘i Visitors Guide (PDF) “to provide some additional context, including perspectives from our colleagues local to Hawai‘i.”