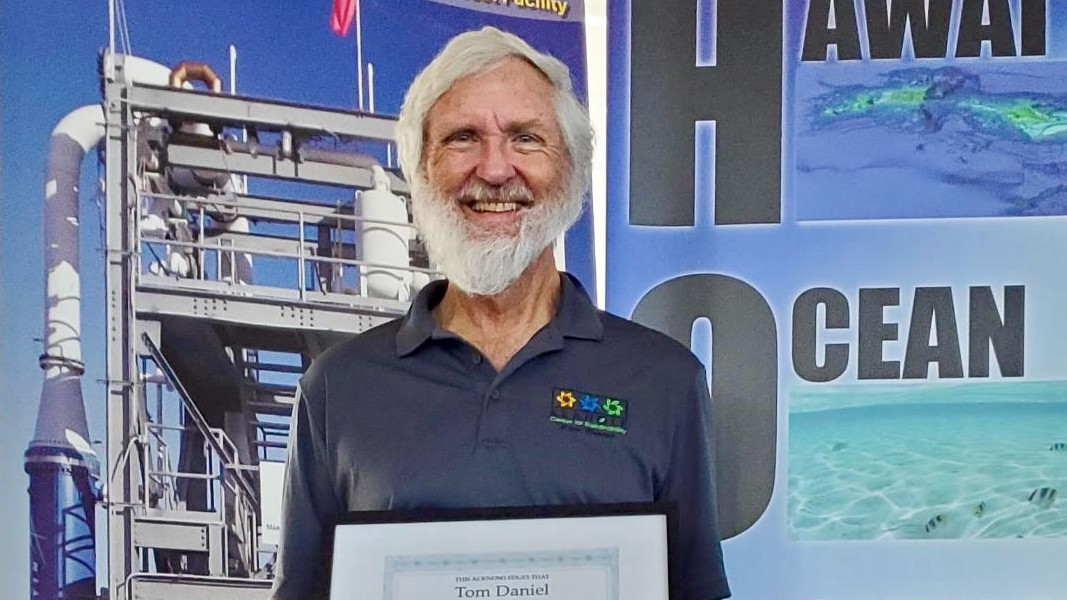 KONA, Hawaiʻi - Dr. Tom Daniel of Kailua-Kona is the recipient of the distinguished third annual Uehara Prize, the Keahole Center for Sustainability announced on Thursday.

(BIVN) – During the 8th International OTEC Symposium, held virtually this year due to the pandemic, a Kona man was honored for his contributions toward the development and support of Ocean Thermal Energy Conversion.

This news release was shared by the Keahole Center for Sustainability, the non-profit organization that shares the uniqueness of the Hawai‘i Ocean Science and Technology Park at Keahole Point:

Dr. Tom Daniel of Kailua-Kona is the recipient of the distinguished third annual Uehara Prize for his contributions toward the development and support of Ocean Thermal Energy Conversion. OTEC is the technology for producing energy by harnessing the temperature differences between warm ocean surface waters and cold deep ocean waters.

Daniel recently received the distinguished award during the 8th International OTEC Symposium held virtually by the Institute of Marine Sciences and Limnology at the National Autonomous University of Mexico in Cancun.

Daniel served as the scientific/technical director for NELHA 1982-2003 and collaborated with Dr. Uehara and other energy leaders in the development of NELHA’s many OTEC projects.

“I’m pleased to accept the award as recognition for my role in facilitating and promoting the development of this exciting alternative energy technology,” notes Daniel, who explains that a large part of his time was spent interfacing with leaders and researchers from all over the world.

“These cutting-edge energy scientists initially came to observe and use the unique warm and cold seawater supplies we’d developed at Keahole Point,” details Daniel. “My contribution was to facilitate and publicize their research and development efforts while helping many of them develop similar facilities elsewhere,” he adds.

While with NELHA, Daniel traveled to Japan, Korea, Taiwan, Europe and the UK sharing the opportunities for continued OTEC research in Kona and developing plans for additional OTEC operations abroad. “These trips led to the formation of many friendships and valuable collaborations with the relatively small group of scientists and engineers working on the exciting OTEC technology worldwide,” he explains.

Daniel first became aware of the potential of OTEC in the 1970s while an oceanography graduate student at the University of Hawaii at Manoa. As an employee with Lockheed Ocean Systems in California, Daniel was assigned in 1979 to work on Mini-OTEC: the world’s first floating demonstration of energy production from ocean temperature differences. The facility was on a barge moored offshore Keahole Point, before the first buildings were up at NELHA’s HOST Park.

Before leaving NELHA in 2003, Daniel helped found the Friends of NELHA, which is now known as the Keahole Center for Sustainability. KCS provides public tours and educational outreach at HOST Park, including sharing info about the current on-site OTEC research and development facilities.

“This vibrant, non-profit organization has provided important support to the continued international cooperation on OTEC development, largely through assistance with and co-sponsorship of 10 years of the annual Okinawa-Hawaii Ocean Energy Workshop and Symposium, which alternates between Okinawa and Kona,” details Daniel. “I’m very grateful to have had the opportunity to continue promoting OTEC technology through service on the board of directors of KCS.”

Register, though February 19, to watch the free virtual 2021Okinawa Hawaii Clean Energy Workshop, including a video presentation by KCS.