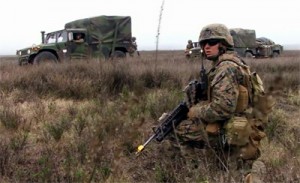 PTA will get a funding boost under approved budget

POHAKULOA TRAINING AREA, Hawaii: Pohakuloa Training Area will be getting $29 million for its Automated Infantry Platoon Battle Course under the Military Construction and Veterans Affairs Appropriations Bill, approved by the Senate Committee on Appropriations on Tuesday. The committee is chaired by Hawaii Senator Dan Inouye.

In the recent past, army officials have said that a PTA Infantry Platoon Battle Area would include a Battle Course, Live-fire Shoothouse, and Military Operations on Urban Terrain facility.

The funding is part of the $366 million for military construction projects in Hawaii, including $181 million to build new housing at Schofield Barracks and Wheeler Army Airfield, $5 million for a C-130 rinse facility at U.S. Coast Guard Air Station Barbers Point and $24 million for a waterfront operations center at Joint Base Pearl Harbor Hickam.

The committee approved both measures Tuesday by a vote of 30-0 for Military Construction and Veterans Affairs and a vote of 27-3 for Homeland Security with Chairman Inouye voting in favor of each. The bills now go before the full Senate for consideration.

Sen. Inouye, Sen. Daniel Akaka and Hawaii’s representatives had these comments, in a media release:

“Today, as America’s defense posture shifts to account for the challenges in the Asia Pacific, the military’s mission in this region is as important as it was when I served in the Army many years ago,” said Senator Inouye. “These measures provide the funding necessary to build the infrastructure and housing we need in Hawaii to support our men and women in uniform. I will see to it that the government continues to provide whatever the military needs to perform their duties and return home safe to their families and loved ones. The construction projects included in these bills will also create much needed jobs for Hawaii’s construction industry. The Committee’s action on the Department of Veterans Affairs budget continues our efforts to improve care for our veterans, many of whom will be returning to Hawaii as we wind down the war in Afghanistan. Finally, I am pleased the Department of Homeland Security bill supported requests which will help keep our communities in Hawaii safe by supporting the Coast Guard’s many missions and preserving Federal Emergency Management Agency grants for the state and county governments in Hawaii. I would urge my colleagues in the Senate to quickly approve these measures, ” said Chairman Inouye.

“I applaud the Appropriations Committee for approving these vital construction projects needed to keep Hawaii’s military facilities up to date and provide critical construction jobs in the islands. I am pleased the committee included the provision Senator Inouye and I requested directing the Department of Homeland Security to write clear guidelines for admission from Freely Associated States and help Hawaii properly care for COFA migrants by reducing the disproportionate impact on our state’s budget. At my Veterans’ Affairs field hearing on Oahu last month and during oversight trips to the neighbor islands, we heard about the unique hurdles Hawaii veterans face living in an island state so far from the mainland, so I am very pleased this legislation contains a provision specifically directing the VA to study the challenges facing Hawaii and Alaska veterans seeking care. I look forward to working with Senator Inouye and our colleagues to bring these provisions and projects into law,” said Senator Akaka.

“Mahalo to Chairman Inouye for working to secure investments that will create jobs in Hawaii and support our service members and their families. These important projects reflect Hawaii’s strategic role in the Asia Pacific region and will help our military readiness for current and future missions. I am also pleased to see this bill include a focus on improving health services to Hawaii’s veterans. The Department of Veterans Affairs should ensure that veterans aren’t needlessly traveling thousands of miles to mainland VA hospitals when such services could be given through a local hospital minutes away. Our veterans have sacrificed so much in service to our nation, and they deserve convenient access to health services. I hope to see the House maintain and build on the great work started by Chairman Inouye and his Senate colleagues,” said Congresswoman Hirono.

“I would like to say mahalo to Chairman Inouye and the Senate Appropriations Committee for their continuing support for our men and women in uniform, and their recognition of the vital role Hawaii will play in the twenty-first century,” said Congresswoman Hanabusa, a member of the House Armed Services Committee. “As our nation shifts our defense focus to the Asia-Pacific theatre, this funding will help us improve the infrastructure at our island installations to support the needs of our regional forces, while creating important jobs for our local economy. I will continue to do all I can to ensure that the safety and security of our nation remains a top priority.”

The Hawaii monies are a part of a nationwide total of $146.6 billion for Military Construction, Veterans Affairs and Related Agencies for fiscal year 2013, and also $45.2 billion for the Department of Homeland Security.