HONOLULU, Hawaii: Possessing or transporting deer from island to island is now illegal in the state of Hawaii. Governor Neil Abercrombie enacted Senate Bill 3001 at a signing ceremony on Oahu today. In a media release, the state says “the Axis Deer has caused great damage to native habitats and agricultural crops on Maui and […]

HONOLULU, Hawaii: Possessing or transporting deer from island to island is now illegal in the state of Hawaii.

In a media release, the state says “the Axis Deer has caused great damage to native habitats and agricultural crops on Maui and are a danger to vehicular traffic on roadways. SB 3001 aims to provide a deterrent to the purposeful spread of wild or feral deer within the State and establishes penalties for the intentional possession or interisland transportation or release of wild or feral deer.”

State Senator Gilbert Kahele introduced the measure, shortly after the Axis Deer were discovered on the Big Island. The senator, who serves as Vice-Chair of the Senate Committee on Agriculture, has been a strong proponent of the swift removal of invasive deer.

In the file video to the right, Senator Kahele sizes up his rival ungulate while visiting the Panaewa Rainforest Zoo in September of 2011. “Knowing the negative impacts that will occur to the environment and our local industry,” wrote the Senator in a editorial published in state newspapers around that same time, “I am doing everything in my power to prevent this animal from establishing itself on the Big Island.”

Axis Deer were introduced to the Hawaiian Islandʻs in 1868, and many farmers and environmentalists say the results have been devastating to the islands of Molokaʻi and Maui and their agricultural and tourist industries.

Officials believe the deer were smuggled to the Big Island and released by private individuals, although no official investigation is being conducted.

From the Hawaii DLNR, in an April 2012 media release:

Reports of axis deer sightings across the Big Island have been increasing over the past year, since the Big Island Invasive Species Committee took a photograph of one in Ka’u District with a game camera on April 29th of 2011. The game camera was set up in response to a deer sighting made by local ranchers. Before this date the project has focused on mapping the distribution and confirming the numerous reports, and photographs were the only solid evidence of their existence.

The first attempt to bring axis deer to the Big Island for game hunting began in the 1950’s and 1960’s – a process which was halted by protests from the farming and ranching community who were already aware of the risks of this animal.

Now, over 50 years later, ranchers and farmers are again raising their concerns over the threat these deer pose – especially in light of recent flurry of reports of deer in areas dominated by local agriculture. 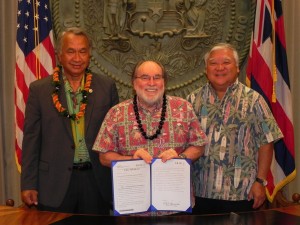 On April 11th, 2012 the first axis deer was taken on Hawaii Island as a part of an official, coordinated control effort. The Department of Land and Natural Resources provided photographic proof, which ignited a firestorm of comments from visitors to this website. [MORE: First axis deer hunted down on Hawaii, DLNR provides photo proof]

The Humane Society of the United States and Humane Society Wildlife Land Trust, who worked in support of this bill, are offering a reward of up to $2500 for information leading to the arrest and conviction of the person or persons responsible for the illegal transport, release or abandonment of deer on the Big Island. The DLNR- Division of Conservation and Resource Enforcement is asking anyone with information on this illegal activity to please contact their toll-free reward tipline at 1-855-DLNR-TIP (1-855-356-7847).

If anyone sights a deer on Hawaii Island, please call the Big Island Invasive Species Council Deer Coordinator at (808)443-4036.

“I am extremely pleased that the Governor has decided to sign this important peice of legislation into law. Axis Deer have been devastating to our precious environment and our agricultural industry. This law will send a clear message to those that attempt to transport the Axis Deer to Hawaii island that this Administration, the Legislature and the residents of our State will not tolerate this conduct. Just this past April the Department of Land and Natural Resources recorded the first official kill of an Axis Deer in Kaʻu. I applaud this effort and and will continue my mission to completely eradicate the Axis Deer from Hawaii Island. This law reaffirms that message.” – Senator Gil Kahele, in a press release on June 21, 2012

“We commend Senator Kahele, the state legislature and the Governor for passing SB3001 to prevent the cruel and irresponsible abandonment of deer across Hawaii. Such illegal introductions cause unnecessary animal suffering and harm to the environment” – Inga Gibson, Hawaii director for The Humane Society of the United States.