Alleges school officials stopped them from passing out copies of the Constitution during January event. 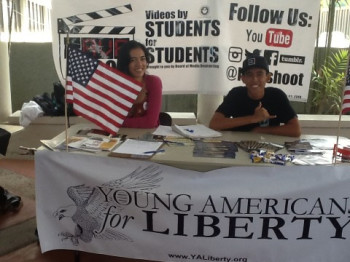 photo taken on the day of the incident, courtesy the UH-Hilo chapter of YAL. Merritt Burch is on the left behind the American flag.

HILO, Hawaii – Two University of Hawaii students are suing UH-Hilo for allegedly violating their First Amendment rights. Merritt Burch and Anthony Vizzone – both involved in the UH-Hilo chapter of Young Americans for Liberty, or YAL – say school officials stopped them from passing out copies of the Constitution during an event in January.

A media release was issued by the nonprofit educational foundation FIRE – the Foundation for Individual Rights in Education – which is assisting the plaintiffs with the lawsuit.

The complaint alleges that on January 16, 2014, plaintiff Merritt Burch, who is president of the UH Hilo chapter of Young Americans for Liberty (YAL), and a fellow student YAL member were participating in an outdoor event where student groups set up tables to distribute literature. Observing other students walking around and handing out items, Burch and her friend walked out from behind YAL’s table to likewise hand out Constitutions and YAL information cards. A UH Hilo administrator ordered Burch and her companion to stop approaching students and get back behind their table, dismissing Burch’s protest about her constitutional rights.

A week later, in an orientation meeting for student organizations, another administrator reiterated the rule against passing out literature. Burch and Vizzone were told that if they wanted to protest, the proper place to do so would be in UH Hilo’s “free speech zone,” a sloping, one-third acre area on the edge of campus. The “free speech zone” represents approximately 0.26% of UH Hilo’s total area and is muddy and prone to flooding in Hilo’s frequent rain. The administrator further observed, “This isn’t really the ’60s anymore” and “people can’t really protest like that anymore.”

Burch and Vizzone are challenging the denial of their right to hand out literature and policies restricting the distribution of literature. Foundation for Individual Rights in Education

The case was filed in the U.S. District Court for the District of Hawaii. Burch and Vizzone are represented by Robert Corn-Revere, Ronald London, and Lisa Zycherman of the Washington D.C.-based firm Davis Wright Tremaine. Along with FIRE, Davis Wright Tremaine recently helped a student successfully settle a similar suit against Modesto Junior College in California.

“So far this academic year, students have twice been prohibited from distributing the Constitution on a public campus, less than four months apart. That is absolutely unacceptable. The First Amendment is not optional at public colleges—it’s the law. Enforcing restrictive ‘free speech zone’ policies that prevent students from passing out copies of the Constitution is impossible to justify.”
FIRE President Greg Lukianoff

Learning of the lawsuit on Thursday, the University issued this statement to media.

The University of Hawai`i at Hilo is committed to free expression and the open exchange of ideas. This case involves the application of specific campus policies that were implemented to protect those values while preserving the educational environment for all students. UH Hilo has initiated a review of the policies involved and the manner in which they were enforced. We will make any changes that are needed to ensure that free expression and First Amendment rights are fully protected.University of Hawaii-Hilo

The university’s policy – according to the complaint – is to direct protests or demonstrations organized by Registered Independent Student Organizations like YAL to the campus “Free-Speech Zone”. According to the complaint, its the only public location on campus where students may express themselves without obtaining University permission in advance. The zone is located on the edge of campus between the theater and the student services building.

Besides the “free speech zone” area, the plaintiffs say the only other locations available to students to “engage in free expression with the UH Hilo student body” is the Campus Center Plaza and the Library Lanai. However, “UH Hilo policies require that students request a reservation at least seven working days in advance to obtain permission to hold expressive activities at either of those areas,” states the complaint.

FIRE is apparently quite familiar with UH-Hilo’s free speech policies. According to the complaint:

UH Hilo repeatedly has been put on notice that its speech policies are unconstitutional. In late 2008, the Foundation for Individual Rights in Education (“FIRE”), a non-partisan, non-profit, civil liberties organization that protects free expression on college and university campuses, and to whose Student Network plaintiffs belong, sent a certified letter to UH Hilo’s Chancellor informing him that the university maintained unconstitutional speech codes. As The Chronicle of Higher Education reported, this letter was part of a national mailing to put senior officials of public universities with unconstitutional speech codes on notice that they could be sued for violating students’ rights. (See Exhibit E). UH Hilo received a second letter with a similar warning in 2010. Since 2010, UH Hilo has been listed every year in FIRE’s annual “Spotlight on Speech Codes” report as a “red light” school, namely one with policies, such as those at issue in this case, that “clearly and substantially” restrict freedom of speech. UH Hilo has had ample notice of its policies’ infirmities and time in which to reform them, but has ignored these notifications and persisted in violating students’ expressive rights. Complaint filed April 24, 2014