Lava enters another crack on the flow field

(ABOVE PHOTO) From the USGS Hawaiian Volcano Observatory: “This wide view, looking west, shows the position of the June 27th flow front relative to the nearby Kaohe Homesteads subdivision. The front of the flow is moving through thick forest, and its position can be seen by the plumes of smoke above the center of the photograph. Near these active surface flows, there was also steaming from a ground crack, resulting from lava deep in the crack. The farthest point of this steaming was 1.7 km (1.1 miles) west of the boundary of the Kaohe Homesteads subdivision.”

PUNA, Hawaii – Hawaii County Civil Defense is reporting very little surface activity on the June 27 lava flow that is moving towards populated areas on Hawaii Island. However, a flyover conducted on Monday morning has revealed that the lava has again entered a crack in the earth and is presumably moving forward underground, as evidenced by steam that can be seen above ground.

The June 27th lava flow remains active. During a Civil Defense flight this morning, the farthest part of the flow, which had been spreading in the forest over the past few days, was seen to be spilling into yet another ground crack about 12.6 km (~7.8 miles) from the vent and about 1.9 km (~1.2 miles) from the eastern boundary of the Wao Kele o Puna Forest Reserve. An HVO flight is scheduled for later today, and an updated flow map and photos will be posted afterward.

Small breakouts also remain active closer to Puʻu ʻŌʻō, roughly midway along the length of the June 27th flow. None of these breakouts were very vigorous when observed Friday, though some are creeping into forest and producing smoke plumes.USGS HVO on Sept. 1, 2014 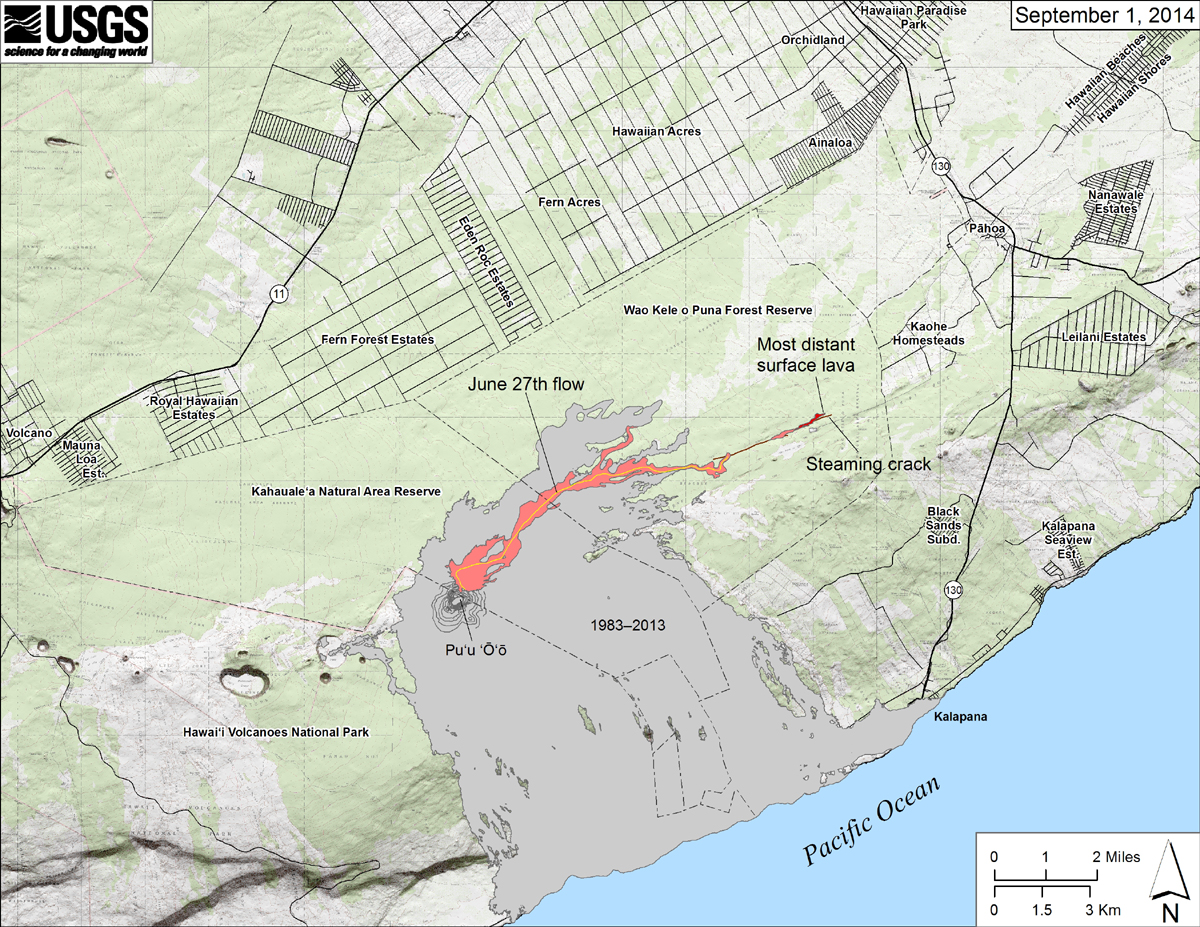 From USGS HVO: “Map showing the June 27th flow in Kīlauea’s East Rift Zone as of September 1, 2014. The area of the flow as mapped on August 29 is shown in pink, while widening and advancement of the flow as of September 1 is shown in red. The only place where lava significantly widened the margin was at the distal end of the flow, where lava in the forest had reached 12.6 km (7.8 miles) from the vent. Most lava at the far end of the flow, however, was cascading into a deep ground crack (brown line), which was steaming at the surface. The most distant steam, which may represent the leading end of the lava in the crack, was 12.9 km (7.9 miles) from the vent and 1.7 km (1.1 miles) from the east boundary of the Wao Kele o Puna Forest Reserve. All older lava flows (1983–2014) are shown in gray; the yellow line within the flow marks the lava tube.” 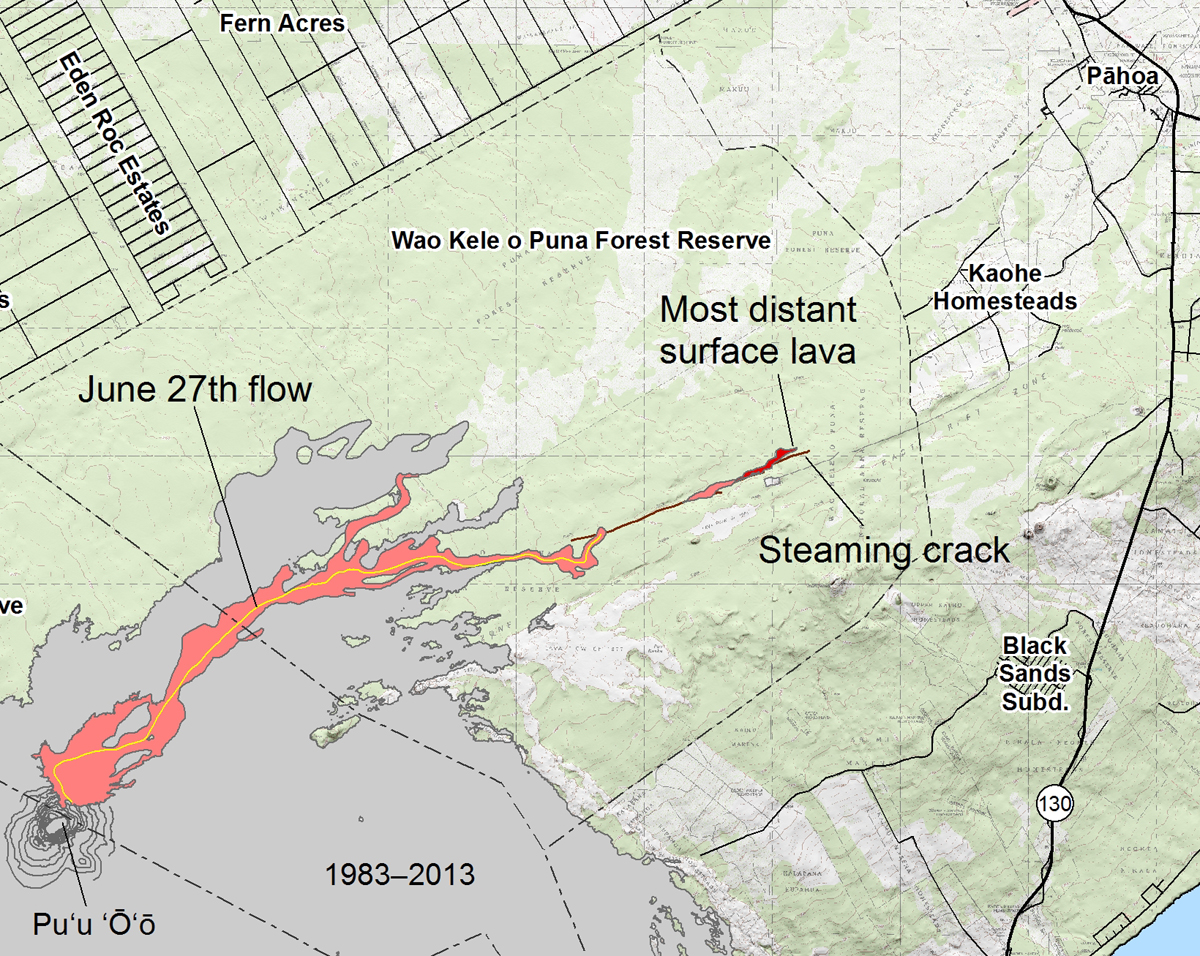 Inset from the above USGS mao 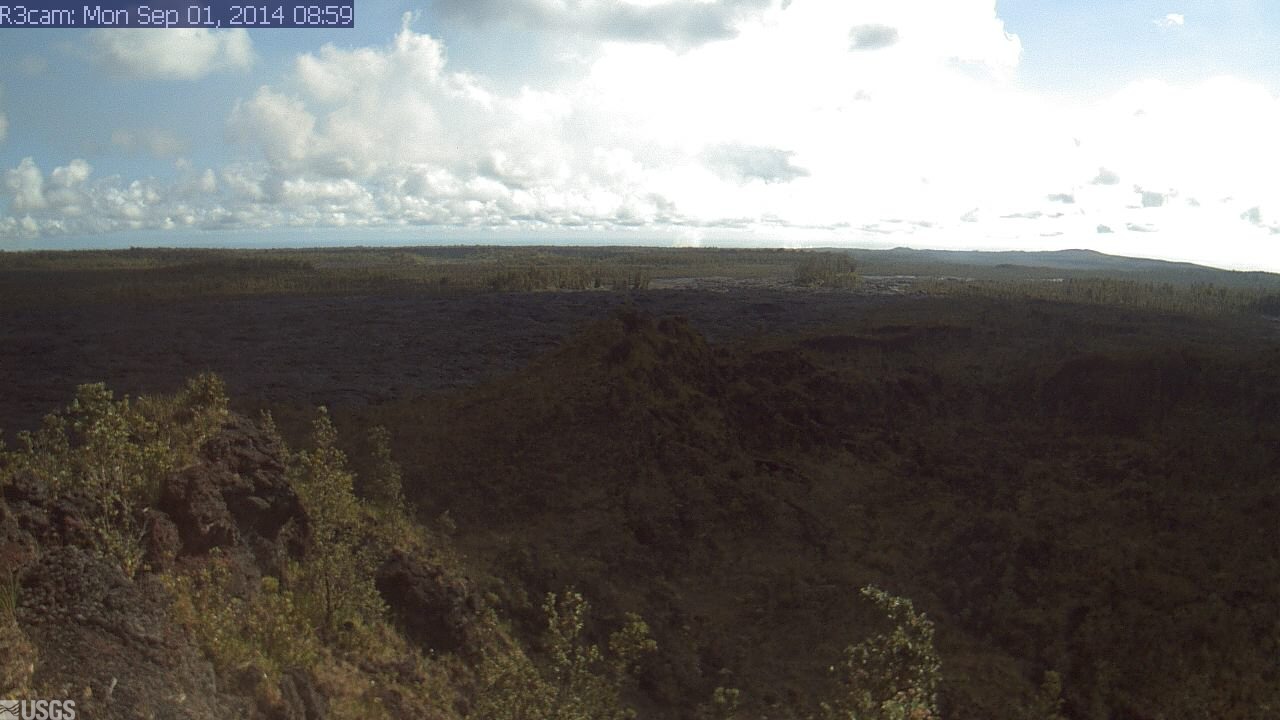 This image is from a USGS Hawaiian Volcano Observatory research camera positioned northeast of Puʻu ʻŌʻō, near the east margin of the lava flow field. It is monitoring the June 27th lava flow. The camera – which can be seen online – looks northeast, down the East Rift Zone.