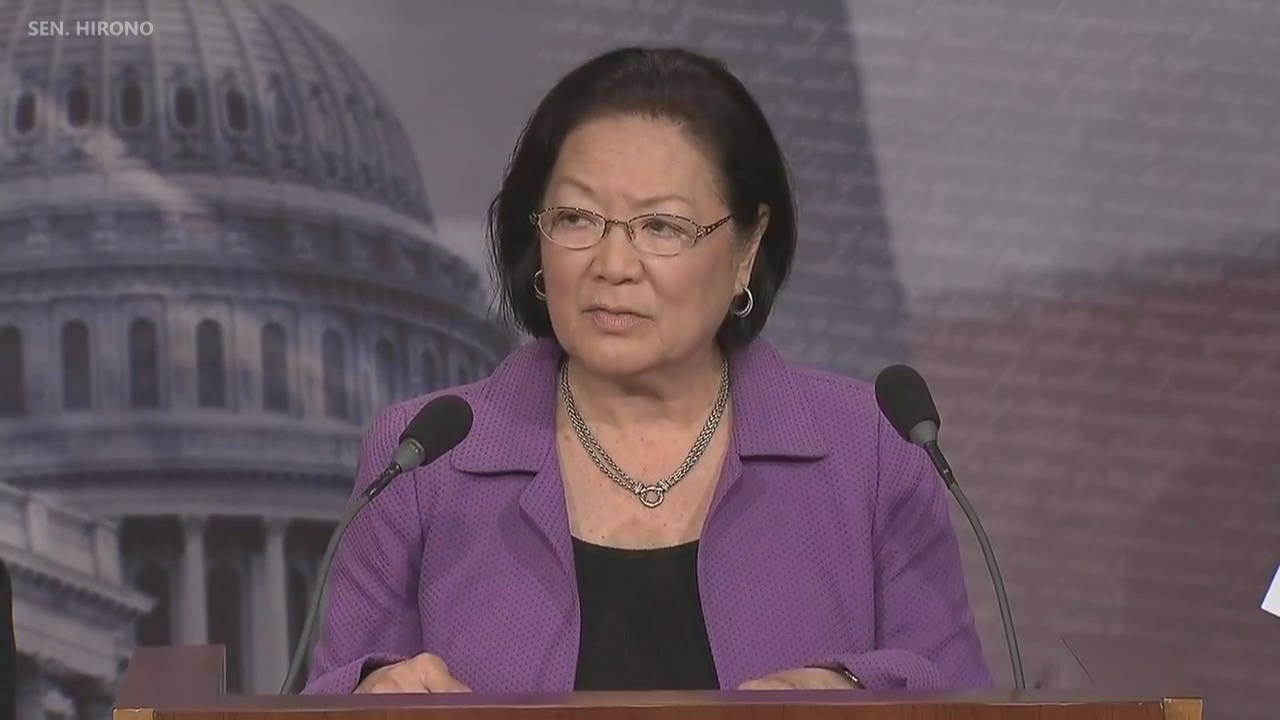 (BIVN) – Senator Mazie K. Hirono introduced legislation on Wednesday that will close a loophole in the Uniform Code of Military Justice that enables convicted abusers to purchase firearms.

The office of Senator Hirono live streamed the entire press conference on Facebook, and issued the media release included below:

This loophole in terminology means that these convictions are rarely reported under the federal law that keeps those convicted of domestic violence charges from buying a gun. The Military Domestic Violence Reporting Enhancement Act would create a charge of Domestic Violence under the Uniform Code of Military Justice (UCMJ) and mandate that convictions must be reported to federal databases that would keep abusers from purchasing firearms within three days.

“Federal law prohibits those convicted of domestic violence from buying a gun, but a loophole in military law enables servicemembers convicted of similar crimes to go unreported. This is egregious,” said Senator Hirono. “This bill would close this dangerous loophole and could help prevent mass shootings like last week’s tragedy in Texas from happening again.”

“We’ve lost too many lives to gun violence at the hands of dangerous individuals who should not have been allowed to buy a gun in the first place,” said Senator Cortez Masto. “Congress must take necessary steps to prevent tragic shootings like in Sutherland Springs, Texas from happening by closing a dangerous loophole in the Uniform Code of Military Justice (UCMJ) that allowed the gunman to avoid reporting requirements despite his domestic violence conviction and buy military assault weapons. This bill will protect lives.”

“Like all of my colleagues, I was horrified to learn about the mass shooting in Texas earlier this month, but as more information came in about who the murderer was, I was extremely troubled to learn that he was a former service member who had had military convictions for domestic violence. This senseless act of violence might have been prevented if only the military had reported the domestic violence the way they were supposed to,” said Senator Gillibrand. “The military should report domestic violence when it happens within their ranks, period. I am proud to join Senator Hirono in introducing this new legislation to upgrade our military laws, so that our military knows how seriously we expect them to treat domestic violence. I urge all of my colleagues to join us in fighting to pass this bill.”

“Time and again from Virginia Tech, to Charleston, and now to a small church in Texas, we have seen holes in the background record check system allow guns to get in the hands of people who shouldn’t have access to them,” said Senator Kaine. “Our background record check system is only as good as the data we put into it, and the Military Domestic Violence Reporting Enhancement Act would help close one of those loopholes and protect Americans from gun violence.”

“As a former prosecutor I’ve spent my career working to protect victims and help prevent tragic acts of violence in our country,” said Senator Klobuchar. “No one policy will prevent every tragedy, but this bill is a commonsense step that will save lives by preventing domestic abusers from accessing firearms.”

“Terminological inexactitude is no excuse for allowing servicemembers who are convicted domestic abusers from purchasing a gun,” said Senator Markey. “This legislation would ensure we close this loophole and help prevent another mass shooting like the one that happened in Texas. We also need to ensure that each and every military court conviction for all violent crimes, especially those involving domestic violence, are reported and safeguards are put in place.”

“Barely a week ago, we saw the devastating consequences of this loophole that allowed a convicted abuser to legally purchase guns and kill 26 innocent people as they worshipped in church,” said Senator Shaheen. “This bill is a commonsense measure that will keep weapons out of the hands of those who wish to do harm, and help make our communities safer.”

“Taking common-sense steps to reduce gun violence is crucial to lowering the death toll we see day in and day out in our country,” said Senator Van Hollen. “This legislation will help ensure that no perpetrator of domestic violence in the Armed Forces is able to pass an FBI background check to obtain a firearm. Following the shooting in Southerland Springs, Congress must act to close this loophole and work towards broader reforms to prevent gun violence.”