PUNA, Hawaii - The new activity means an outbreak of lava in a new location could occur, and officials say that "while it is not possible to predict where an outbreak could occur, the area east of Pu’u O’o is a possible location." 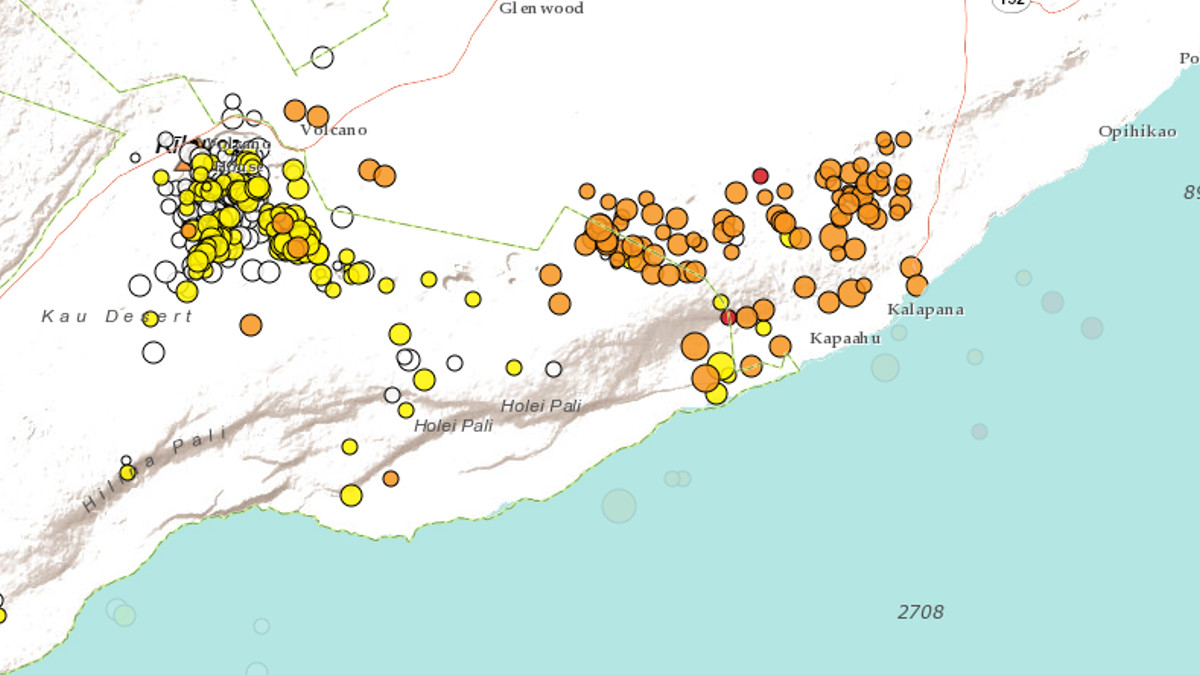 (BIVN) – A series of earthquakes, the largest measured at a Magnitude 4.0, began rattling the Puna district below Kilauea volcano in the area between Pu’u O’o and Highway 130 last night, following the collapse of the Puʻu ʻŌʻō crater floor Monday afternoon.

A collapse of the Puʻu ʻŌʻō crater floor Monday afternoon on Kīlauea Volcano’s East Rift Zone has prompted increases in seismicity and deformation along a large section of the rift zone, with seismicity currently occurring as far east as Hwy 130. A outbreak of lava in a new location is one possible outcome. At this time it is not possible to say with certainty if or where such an outbreak may occur, but the area downrift (east) of Puʻu ʻŌʻō is the most likely location, as this is where seismicity and deformation have been concentrated overnight.

Residents of lower Puna should remain alert and watch for further information about the status of the volcano; watch for Hawaii County Civil Defense messages.

Between about 2:00 and 4:30 pm on Monday, April 30, following weeks of uplift and increasing lava levels within the cone, the crater floor at Pu’u ‘Ō’ō on Kīlauea Volcano’s East Rift Zone collapsed.

Poor weather prevented HVO from flying over the activity or seeing details of the activity in our web cameras on site.

Following the collapse, HVO seismometers and tiltmeters recorded an increase in seismic activity and deformation from Kīlauea Volcano’s summit to an area about 6-10 miles downrift (east) of Puʻu ʻŌʻō. Overnight, this activity localized downrift of Puʻu ʻŌʻō and continued to propagate eastward along the rift zone.

The largest earthquake of this sequence so far was a magnitude 4.0 earthquake just offshore south of Pu’u ‘Ō’ō at 02:39 this morning,

Kīlauea’s summit eruption has thus far not been affected by the change at Pu’u ‘Ō’ō.

The migration of seismicity and deformation downrift (east) of Puʻu ʻŌʻō cone following Monday’s collapse indicates that a large area along the East Rift Zone is potentially at risk for a new outbreak.

The location of any future outbreak will determine what areas are in the path of new lava flows.

Hawaii County Civil Defense issued an alert Tuesday morning, saying the activity this “means an outbreak of lava in a new location could occur. While it is not possible to predict where an outbreak could occur, the area east of Pu’u O’o is a possible location.”

“Due to the increased seismic activity, lower Puna area residents are advised to stay informed by listening to the radio; this station will be updated,” the civil defense message stated. “Hawaiian Volcanoes Observatories and your Hawaii County Civil Defense are continuing to monitor the situation. You will be informed as conditions change. Thank you for listening.”