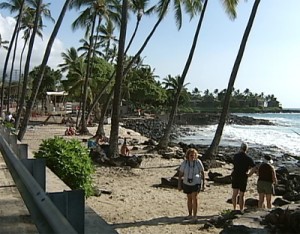 Later in the day the list of closures expanded to include Mahukona Wharf, Maumai Beach, Kohanaiki-Pine trees and Ooma Beach.

Local bodyboarder Steve Rogers said Thursdays waves were not great for surfing, especially towards the end of the day, but also said Friday should be better.

“Its not very often in Kona we get to have such big beautiful waves,” said Rogers, who was born and raised in Kona. “Hopefully tomorrow morning we’ll get some more. There’s like two more swells back to back, so theres going to be some dangerous waves.”