Media release | USGS Hawaiian Volcano Observatory HAWAI‘I ISLAND, Hawaii — At 8:42 a.m. (HST) Monday morning, February 14, 2011, a section of rock from the north wall of Kilauea Volcano’s summit vent broke away and collapsed into the lava lake within the vent inside Halema‘uma‘u Crater. Moments later, gas and ash were explosively ejected […] 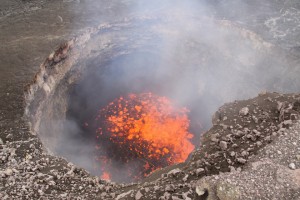 HAWAI‘I ISLAND, Hawaii — At 8:42 a.m. (HST) Monday morning, February 14, 2011, a section of rock from the north wall of Kilauea Volcano’s summit vent broke away and collapsed into the lava lake within the vent inside Halema‘uma‘u Crater. Moments later, gas and ash were explosively ejected as a dusty-brown plume that shot skyward from the crater.

About three hours later, an even larger slice of the vent rim—a crescent-shaped piece of rock estimated to be about 120 m (395 ft) long and up to 5 m (16 ft) wide—collapsed into the lava lake, resulting in another tephra-laden plume. Shortly thereafter, the lava lake level began to drop. It continued to fall throughout the day, but rose again overnight.

USGS Hawaiian Volcano Observatory geologists forecast the possibility of such events based on the fact that the north rim of the summit vent was overhung by about 55 m (180 ft). Rocks falling from this overhang have been a common occurrence, but spattering episodes and the intense heat of the rising lava lake has increased the number of collapses over the past few weeks.

On Monday, blocks of rock hitting the surface of the lava lake created sharp popping sounds that could be heard by visitors at the Jaggar Museum Overlook in Hawai‘i Volcanoes National Park. The churning lava lake within the summit vent also produced a sound likened to crashing waves. A 30-second recording of these sounds and images of the lava lake are posted on the HVO Web site at http://hvo.wr.usgs.gov/kilauea/update/images.html.

According to Jim Kauahikaua, HVO Scientist-in-Charge, the network of GPS receivers on Kilauea show continued extension across the volcano’s summit and east rift zone. “This extension, in addition to the ongoing increase in seismicity on Kilauea’s upper east rift zone suggests that the volume of magma at the summit has increased,” he said.

Tephra—tiny lava fragments and Pele’s hair—ejected by the explosive events on Monday drifted toward Jaggar Museum and the adjacent Hawaiian Volcano Observatory, covering parked cars with a fine dusting of ash and Pele’s hair.

Rockfalls and collapses within the summit vent are not new. In 2008, there were at least 8 significant explosive events, most triggered by vent wall collapses. More recently, a series of summit vent collapses on January 17–18, 2011, produced several explosive events that threw fragments of molten lava onto the rim of Halema‘uma‘u Crater and enlarged the vent opening by 12 m (40 ft).

Since Kilauea’s summit vent first opened in Halema‘uma‘u Crater on March 19, 2008, it has grown from about 35 m (115 ft) to almost 150 m (490 ft) in diameter. Monday’s rockfalls expanded the summit vent width by another 5 to 10 m (15–30 ft). Several more collapses occurred before dawn Tuesday morning, further enlarging the vent, and HVO geologists expect that the summit vent will continue to grow as the overhung north rim continues to collapse.

Daily updates about Kilauea’s ongoing eruptions, recent images and videos of summit and east rift zone volcanic activity, and data about recent earthquakes are posted on the HVO Web site at http://hvo.wr.usgs.gov/.