Vanuatu moves into first on Day 3 of billfish tournament

KAILUA-KONA, Hawaii: The Hawaiian International Billfish Tournament wraps up its third day of action, and there is a new leader in the field of teams from all over the world. (Right Photo: Port Vila Game Fishing Club of Vanuatu arrives at Kailua Pier aboard Sundowner after tagging and releasing two Pacific blue marlin) Laura Aquino […] 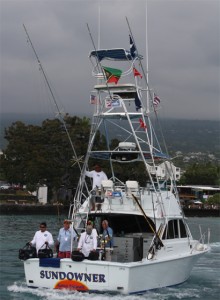 KAILUA-KONA, Hawaii: The Hawaiian International Billfish Tournament wraps up its third day of action, and there is a new leader in the field of teams from all over the world.

Laura Aquino of Current Events passes along this update:

Midway through the five-day running of the 52nd annual Hawaiian International Billfish Tournament and the leaders are vying for key points. Fishing pace skyrocketed on Day One and, while a bit more relaxed, anglers kept the tempo brisk on Days Two and Three.

Port Vila Game Fishing Club of Vanuatu jumped to the top position with another two Pacific blue marlin tags today. Angler Murray Parsons, fishing aboard Sundowner and captained by long-time Kona skipper Randy Llanes, tagged and released an estimated 150-pound Pacific blue marlin just after the lunch hour. An hour later, teammate Andrew Mourgues tagged his first fish of the tournament in just five minutes. Both tagged marlin earned this rookie HIBT team enough points to take over the lead position with a cumulative score of 1400 points. “I tagged my fish in just about 5 minutes, an easy feat with Kona’s great captains and crews,” said Mourgues.

Another tight race to watch is the one brewing between Kona’s celebrated captains. Skippers and crewmembers are scored over the five days of tournament fishing right along with the anglers. Tournament founder Peter Fithian has always felt it important to distinguish Kona’s talented fishing fleet as one that ranks among the world’s best.

Captain Tim Hicks of the Last Chance, a 43-foot Cabo, boated the Tournament’s only two Pacific blue marlin so far – all others have been tagged and released. The Game Fish Club of South Australia drew this hot captain today and, fishing off South Kona in the area called Tango, angler Ralph Czabayski boated a 389-pound Pacific blue marlin in just over an hour. The strategy that played into this catch yielded this team 619 points.

“The fish ate the lure, and before I knew it line was piling off the reel. About 400 yards away, I saw the splash, but never got a good look at the fish,” said Captain Hicks. “This team knew the strategy of putting points on the board with a boated fish. My deck hand Ian Keinath had a gaff in one hand and a satellite tag in the other. As soon as I saw her sideways, I knew she was over the minimum boating weight of 300 pounds and Ian gaffed her.” Weighing in at 389 pounds, Game Fish Club of South Australia confirmed what a good day – and good 19 years – it has been at HIBT.

Yes, this is the same Captain Hicks who was hooked up well into the evening yesterday until the estimated 700-pound Pacific blue marlin broke line after a three-hour fight by angler Mari Arakawa of the Olympian Dream Fishing Club of Japan.

“These teams along with our captains and crews must make split-second strategic decisions at the back of the boat. Do you tag the fish and take the 300 guaranteed points, or risk the higher reward and boat the fish? If you guess wrong, you could end up forfeiting the points if the fish does not make weight,” said Fithian. “With the large majority of our teams on the scoreboard, a weigh in can become a game changer. Today it was the perfect decision.”

The Hawaiian International Billfish Tournament is underwritten by the generosity of the County of Hawaii and sponsored in part by KWXX Radio and numerous other corporate and community donors.

The 2011 HIBT is comprised of five days of tournament fishing and continues through Friday, July 29.

For more information on the Hawaiian International Billfish Tournament, including team listings, IGFA world-record rules and a daily video recap of tournament standings, log onto www.hibtfishing.com .

*Note: in the event of point ties, place standings are determined by the time the fish is boated.