Video by David Corrigan | Voice of Stephanie Salazar POHAKULOA TRAINING AREA, Hawaii: Above the clouds with the U.S. Army, aboard Black Hawk helicopters, Big Island Video News captured this video of the controversial High-Altitude Mountainous Environmental Training, also known as HAMET… part of a special demonstration done at the request of the state of […] 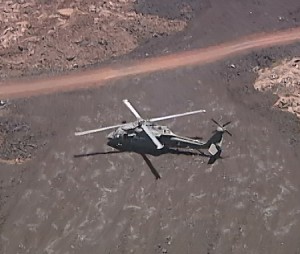 POHAKULOA TRAINING AREA, Hawaii: Above the clouds with the U.S. Army, aboard Black Hawk helicopters, Big Island Video News captured this video of the controversial High-Altitude Mountainous Environmental Training, also known as HAMET… part of a special demonstration done at the request of the state of Hawaii.

The Department of Land and Natural Resources is deciding whether or not to sign off on a permit allowing the Army to land the war machines high on the slopes of Mauna Kea and Mauna Loa.

The Army says the training is needed to better handle similar terrain high in the mountains of Afghanistan. Flying at these heights, with the looming mountains on either side, requires a certain mastery of helicopter aviation, and the Army says this training will save lives.

But on Hawaii Island, local residents are not so happy with the plan.

Hank Fergerstrom was one of a handful of concerned residents and community organizations that joined DLNR officials on Tuesday to get a first hand look at the HAMET exercise.

The Army has revised its Environmental Assessment, and hopes to prove that the project will have No Significant Impact, as it tries to obtain a permit from the state Land Board.

Col. Frank Tate, the 25th Infantry Division CAB Commander in the U.S. Army, briefed the group about the flight path and the location of the six landing zones – called L.Z.’s for short – where the army will practise landing their Black Hawks.

Army offcials answered questions, and tried to ease fears that the training would have an adverse environmental impact.

Then, it was onto the Bradshaw Airfield for take-off.

In April, the Army organized a similar demonstration for the media, but the helicopter ride was cancelled because of cloud cover. Today, blue skies meant the flight was a go!

First stop: the Mauna Kea LZ’s… the two helicopters quickly ascended to 13,000 feet, up to the three locations which were about 2 to 3 miles away from the actual summit. One helicopter demonstrated the landings, while the other helicopter observed. Our news camera was on the observation chopper.

After a smooth set of touch downs on the three landing zones on Mauna Kea, the Black Hawks taxied above the clouds to Mauna Loa, a far different terrain, comprised of old a’a lava flows.

The Army showed the observers the three landing zones that will be used on this huge, sleeping volcano… and after an hour or so the HAMET demonstration was finished.

Like the Army had said, very little dust was observed being kicked up by the landings.

The flights served to illustrate the Army’s request in a way that the EA cannot… nothing beats seeing something like this in person… but the demonstration did little to assuage the concerns of Fergerstrom, who shared his thoughts on what he saw shortly afterwards.

EDITOR’S NOTE: An earlier version of this report erroneously reported that an Environmental Impact Statement was going to be required, however it is an additional state Environmental Assessment that was requested in addition to the previous federal assessment.

View our ongoing coverage of the U.S. Army HAMET on Hawaii Island.