Video courtesy the USGS Hawaiian Volcano Observatory HAWAII VOLCANOES OBSERVATORY, Hawaii: It was 5 months ago when the world watched the Pu’u O’o crater collapse as the dramatic Kamoamoa fissure eruption tore open the earth on the east rift of Kilauea volcano. Today, another lava breakout on the east rift in nearly the same area […] 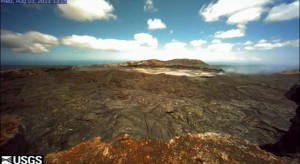 HAWAII VOLCANOES OBSERVATORY, Hawaii: It was 5 months ago when the world watched the Pu’u O’o crater collapse as the dramatic Kamoamoa fissure eruption tore open the earth on the east rift of Kilauea volcano.

Today, another lava breakout on the east rift in nearly the same area has been followed by another collapse, this time a drop of about 260 to 280 feet, according to Hawaiian Volcano Observatory scientists.

HVO scientists say the video seen here “shows a timelapse sequence taken from the webcam on Pu`u `O`o’s north rim. The movie starts just after noon on August 3, with the typical westward flow of lava within the perched lava lake. Just after 2pm, breakouts start on the flank of the perched lava lake and the lake begins to drop. Remarkably, while the lake drops the circulation is maintained, until the lake finally disintegrates. By the end of the sequence, the lava lake is gone and floor has dropped about 80 meters (260 ft). Around 3:15pm, you can see a portion of the rim, at the very right end of the image, collapse into the crater.”

The second, thermal image video “shows a timelapse sequence taken from a thermal camera on the south rim of Pu`u `O`o, beginning just before noon on August 3. Just after 2pm, the lava lake and surrounding floor abruptly drop. As the lava lake drops, solidified portions of the crater floor slide into the fluid lava. By the end of the sequence, the floor of the crater is composed of only hot rubble and inclined blocks of the pre-existing crater floor. The temperature scale is degrees Celsius.”

With volcanoes, we often learn by comparing current events with those of the past. We can even make limited forecasts based on past scenarios if they are sufficiently similar.

The August 3 collapse of the Pu`u `O`o crater floor, accompanied by the eruption of a high-volume lava flow from a vent on the cone’s west flank, is similar to other events on Pu`u `O`o during the past 20 years. For example, this week’s event is akin to the Mother’s Day event on May 12, 2002.

In early 2002, lava was intermittently active in several small pits within the Pu`u `O`o crater floor, and tubes fed lava flows down Kilauea’s south flank, destroying one house in the Royal Gardens subdivision, 6 km (4 mi) away. Throughout the spring, Pu`u `O`o activity slowly increased, resulting in two brief surges of lava within the crater in April. Early in the month, lava ponded in a pit immediately west of Pu`u `O`o Crater. This pit eventually overflowed, producing a lava flow that advanced 800 m (0.5 mi) to the south-southeast. Then, at the end of April, lava erupting from the east half of the crater floor filled Pu`u `O`o to within 12 m (40 ft) of its east rim.

Subdued activity continued until the morning of May 12, 2002—Mother’s Day. At 7:40 a.m., HST, a tiltmeter on the north flank of Pu`u `O`o began recording rapid inflation. About an hour later, high-volume lava flows gushed from two vents 100 m (300 ft) apart on the west flank of Pu`u `O`o cone. Lava first traveled west, then turned to the southwest, and advanced along the edge of previous flows, sparking the largest forest fire from Kilauea’s east rift zone eruption at the time. The initial lava output was estimated at 8 million cubic meters per day (1,500 gpm), but decreased over the following days. Lava reached the ocean on July 19, about 5 weeks after it first erupted. Interestingly, gas emissions did not increase from this outbreak on Pu‘u ‘Ô‘ô’s west flank.

Flash forward to 2011. In early March, Pu`u `O`o collapsed prior to a four-day fissure eruption to the west, and, by the end of the month, lava was refilling the crater. On July 3, the crater floor began to inflate like a balloon, with the perched lava lake within the crater resembling a recessed pool on top of a large dome. The rapid increase in subsurface pressure beneath the crater floor signaled impending change.

Sure enough, in late July, lava erupting from vents within Pu`u `O`o filled two small pits just west of the crater. Lava spilled out of those pits on July 25, feeding a small lava flow toward the southwest. Lava activity and crater floor uplift in Pu`u `O`o diminished on July 30 but resumed on August 1.

Then, on Wednesday, August 3, at about 2:00 p.m., HST, the domed floor of Pu`u `O`o Crater started to subside. Fifteen minutes later, lava burst from the west flank of the Pu`u `O`o cone, flooding downslope areas and forming a branched flow. The weaker northwest branch flowed into the forest on the north side of the rift zone, while the much more vigorous south branch quickly moved downslope along the west side of the Mother’s Day flow field, advancing 3.6 km (2.2 mi) in 3 hours. Preliminary lava production estimates are at least twice the rate of the 2002 flow, and gas emissions increased by a factor of 10 to 5,000-7,000 tonnes/day.

Although the lava flow has now diminished, based on similar past events, it might last from days to weeks, or perhaps months. The volume of erupted lava has already equaled, or exceeded, the volume of the Pu`u `O`o crater collapse, so the flow is possibly being fed directly from the rift zone.