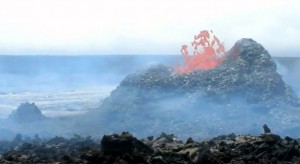 We also caught up with the USGS Hawaiian Volcano Observatory’s Scientist-in-Charge, Jim Kauahikaua, to talk about the current phase of the eruption.

Kauahikaua said the lava effusion rate has slowed considerably since the August 3rd breakout, and detailed the latest event from a geologists perspective.

The latest volcano update, as 8:12 a.m. Hawaii Time, was posted by HVO on their website:

Past 24 hours at the middle east rift zone vents: Lava continued to trickle into the deepest part of the collapsed crater floor. The west flank vents remained active issuing short flows that advanced over lava emplaced since August 3rd; the western webcam showed southwest advancement of a channelized `a`a flow. The active flows remained entirely within Hawai`i Volcanoes National Park and posed no direct hazard to any developed areas.

The GPS network around Pu`u `O`o Cone recorded slowing contraction across the cone. The tiltmeter on the north flank of Pu`u `O`o Cone recorded continued deflation. Seismic tremor levels were low. The most recent (preliminary) sulfur dioxide emission rate measurement was 1,700 tonnes/day on August 5, 2011, from all east rift zone sources.

Background: The eruption of Kilauea’s middle east rift zone started with a fissure eruption on January 3, 1983, and has continued with few interruptions through Pu`u `O`o Crater or vents within a few kilometers to the east or west. Since late March, lava has been filling the collapsed crater within Pu`u `O`o Cone, first building a perched lava lake that, in July, evolved into a shield with the lake at its top as a result of uplift of the crater floor and lake. In early August, the crater floor again collapsed to a depth of about 75 m (245 ft) below the east rim as lava burst from vents on the west flank of Pu`u `O`o cone.

Past 24 hours at Kilauea summit: The lava lake level stabilized at a low level and 15-minute fill-and-drain cycles started around 9 am yesterday, were in full swing 2 pm to 4 am this morning, and were finished by 6 am this morning; before and after this period, circulation was sluggish from southeast to northwest. Small rockfalls were frequent from the vent walls.

Kilauea summit is deflating: the summit tiltmeter network continued to record slowing deflation and the summit GPS network recorded contraction since August 3rd. Seismic tremor levels were generally low although strong bursts accompanied each draining at an interval of approximately 15 minutes. Six earthquakes were strong enough to be located within Kilauea volcano – three deep quakes beneath the area immediately west of the summit, two quakes beneath the summit caldera, and one on south flank faults.

The most recent (preliminary) sulfur dioxide emission rate measurement was 800 tonnes/day on August 5, 2011. Small amounts of ash-sized tephra, including fresh spatter bits, continued to be wafted within the plume and deposited on nearby surfaces.

Over the weekend, the Hawaii Volcanoes National Park, expecting an increase in visitors seeking a closer look, released this statement:

Park-goers on Thursday evening enjoyed views of Pu‘u ‘Ō‘ō’s west flank eruption from several spots. Rosy clouds of gas and ash were visible from the bottom of Chain of Craters Road looking up towards Pu‘u ‘Ô‘ô, where nearly 600 visitors gathered. At Pu‘u Huluhulu, hundreds of flashlight-wielding hikers made the two-and-a-half mile round-trip trek and were treated to a rare “double header” of lava activity: a deep orange glow from Pu‘u ‘Ō‘ō’s advancing flows about six miles away, plus a reddish glow from Kīlauea’s summit eruption at Halema‘uma‘u crater about 12 miles away. Newly installed reflectors mark the trail, but hikers must have flashlights, drinking water and wear sturdy, closed-toe shoes.

Spectators at Jaggar Museum overlook got the reverse view, a steady glow emitting from Halema‘uma‘u Crater, with views of Pu‘u ‘Ō‘ō’s new activity to the southeast.

Park rangers made several flights over the new flow, and estimate it has added approximately 615 acres of new lava.

“It’s an exciting and memorable time to visit Hawai‘i Volcanoes National Park, and we’re expecting a busy weekend,” said Talmadge Magno, Chief Ranger and Incident Commander. “Safety is our first priority, but because of careful monitoring of fire smoke and SO2 levels, we were able to reopen Chain of Craters Road on Thursday, and viewing opportunities are safe and can be superb, weather permitting.”

Park rangers will be stationed at Pu‘u Huluhulu until 8:30 p.m. and at Jaggar Museum until 9 p.m. through the weekend.

At the same time, fire crews fought to control brushfires resulting from the new influx of lava. The National Park had this to say:

A wildfire, estimated at six acres total, was ignited by lava and burned through forests of native Hawaiian and alien vegetation. A small blaze on the southern branch of the flow was nearly contained Friday afternoon. Seven firefighters were flown in by helicopter, and used hand tools, chainsaws and water from 80-gallon bladder bags to suppress the fire.

Meanwhile, a multi-agency emergency response team mobilized at the Visitor Emergency Operations Center in the park, keeping close tabs on current eruption conditions and another fire, estimated at five acres, at the north stretch of Pu‘u ‘Ō‘ō’s flow.

“Right now we’re not sending any crews into the fire to the north but will watch it closely. Conditions are too hazardous,” said Fire Management Officer Joe Molhoek. In addition to methane explosions and tree snags, giant earth cracks make the ground treacherous.

The fires, and the recent flows, are entirely within Hawai‘i Volcanoes National Park. No residential areas are currently threatened.