By David Corrigan and Tim Bryan [Press conference, Kaka’ako video courtesy KITV | Hawaii Island video, file video by David Corrigan] HONOLULU, Hawaii: The big news on Wednesday out of Honolulu: The State of Hawaii and the Office of Hawaiian Affairs have come to an agreement, in principle, relating to ceded lands. Governor Abercrombie says […] 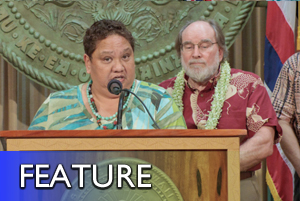 HONOLULU, Hawaii: The big news on Wednesday out of Honolulu: The State of Hawaii and the Office of Hawaiian Affairs have come to an agreement, in principle, relating to ceded lands.

Governor Abercrombie says this is the first important step in a long process of community and legislative meetings so that the public will have the opportunity to provide input.

The ceded lands controversy has been the subject of hundreds of passionate protests and debates. The “ceded lands” refers to crown lands once owned by the Hawaiian monarchy. The State Constitution dictates that the lands are to be held by the State as a public trust for native Hawaiians and the general public. The state constitution also provides that OHA is entitled to a portion of the proceeds derived from the lands, and ever since 1978, OHA has made claims for payment.

The legislature will have to approve the settlement, which is detailed in the media release below.

At a community talk story held Wednesday night in Hilo at the Waiakea High School cafeteria, State Sentaor Gil Kahele has aware that the state and OHA had struck a deal. He offers comment in this video.

The following press release is courtesy the Hawaii Department of the Attorney General:

HONOLULU – Governor Abercrombie announced today that the State and the Office of Hawaiian Affairs (“OHA”) are discussing an agreement in principle, subject to Legislative approval, relating to ceded lands. This is the first important step in a long process of community and legislative meetings so that the public will have the opportunity to provide input. If ultimately approved, this agreement will finally and completely resolve any and all claims relating to OHA’s share of ceded land receipts under article XII, sections 4 and 6 of the State Constitution, from November 7, 1978 to July 1, 2012.

Governor Abercrombie said of this development: “My administration has been working with the Office of Hawaiian Affairs for months to reach an agreement that is pono, that benefits native Hawaiians, and that is the right thing for the State. The Legislature must still properly consider and vet this proposal and give its final approval, and I look forward to working with the Legislature during that process. So while we are pleased that the State and OHA have reached this agreement in principle, there is still a long way to go. We are optimistic that we’ll get there.”

OHA Chairperson Colette Machado said: “OHA will hold many community meetings for the public to provide its input. OHA’s Board of Trustees agreed to move forward with this proposal because we believe it is good for native Hawaiians. We are grateful to the Governor for working hard to make this happen.”

Settlement Terms
The State and OHA agree that a $200 million approximate settlement amount represents a reasonable compromise of the disputed claims. To satisfy that $200 million amount, the State is conveying contiguous and adjacent parcels in Kaka‘ako Makai. The parcels are near Kaka‘ako Waterfront Park, including Fisherman’s Wharf.

The lands are and will remain under the jurisdiction of the Hawaii Community Development Authority (“HCDA”), and will continue to be subject to HCDA’s zoning and other land use conditions. The lands will be conveyed “as is”, “where is”. OHA will do due diligence investigations on the lands, and can walk away prior to Legislative approval.

The State is not giving up any mineral, surface or ground water rights to this land. The State will also have access rights and easements as reasonably necessary for the benefit and use of its adjoining properties. Additionally, all current leases are still valid and will pass to OHA. Once those leases expire, OHA will decide how to proceed, consistent with HCDA’s master plans and rules.

In exchange for the land, OHA will release, waive and discharge any and all claims that it, and any other person or entity, might make to ceded lands receipts under article XII, sections 4 and 6 of the Constitution, or any related statute or law, for the period from 1978 to July 1, 2012.

Background
Article XII, section 4 of the State Constitution, provides that certain lands ceded by the United States to the State of Hawaii as part of the Admission Act (section 5(f)), are held by the State as a public trust for native Hawaiians and the general public. These are known as the ceded lands.

In 2008, a settlement agreement was reached between the Lingle Administration and OHA contingent upon passage of implementing legislation, which did not pass.