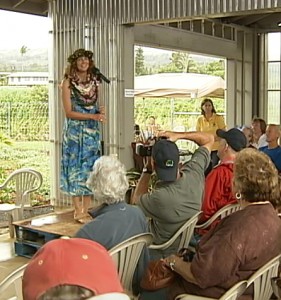 KAPAAU, Hawaii: The North Kohala community celebrated a moment years in the making here in Kapa’au on Saturday, when the maile lei was untied on the Hawaii Wildlife Center.

The Hawaii Wildlife Center is the first state-of-the-art response facility in the Pacific islands exclusively for native wildlife. Operators say the facility will provide for the best achievable medical and husbandry care for sick, injured, contaminated and orphaned native wildlife, including those affected by natural and man-made disasters and by returning those successfully treated animals back to the wild.

For Linda Elliott, the President & Director of the center, it took a lot of work to reach this point.

A number of dignitaries were on hand to congratulate Linda and her many volunteers.

The facility is located directly behind Kohala Middle School, and has already received lots of help from its students.

Jim Kraus, manager of the Hakalau Forest National Wildlife Refuge, was also in attendance, and said the new wildlife center will be an asset to the island.

The facility will serve the central Pacific and Hawaiian archipelago, including the largest area under conservation status in the U.S., Papahanaumokuakea Marine National Monument, where an estimated 14 million Hawaiian seabirds live.