Honuapo gets half million in fed grants, one of 24 projects

RELATED VIDEO: John Replogle talks story, from Sept. 5th, 2010 [FMP poster=”https://www.bigislandvideonews.com/media/2012/01january/honuapothumb.jpg” width=”280″ height=”157″]https://www.bigislandvideonews.com/media/2010/09september/0906honuapo.mp4[/FMP] KA’U, Hawaii: The Honu’apo Estuary Wetlands will be getting $549,000 in federal grant money, one of 24 projects around the country to receive the funds from the U.S. Department of the Interior. Honu’apo is co-managed by the County of Hawaii and […]

KA’U, Hawaii: The Honu’apo Estuary Wetlands will be getting $549,000 in federal grant money, one of 24 projects around the country to receive the funds from the U.S. Department of the Interior.

Honu’apo is co-managed by the County of Hawaii and the community organization Ka ‘Ohana O Honu’apo.. The area includes hundreds of acres of coastal lands, estuaries, and important historic sites.

From the U.S. Fish and Wildlife Service and the Dept. of the Interior:

WASHINGTON – Secretary of the Interior Ken Salazar today announced $20.5 million in grants to support 24 projects in 13 states to conserve and restore coastal wetlands and their fish and wildlife habitat. The grants, awarded under the 2012 National Coastal Wetlands Conservation Grant Program, will be matched by nearly $21 million in partner contributions from state and local governments, private landowners and conservation groups.

“Coastal wetlands serve as some of nature’s most productive fish and wildlife habitat while providing storm protection, improved water quality, and abundant recreational opportunities for local communities,” Salazar said. “I am pleased that with these grants we are able to help our state partners implement some of their high-priority projects that support both conservation and recreation along their coasts.”

The National Coastal Wetlands Conservation Grant Program is administered by the U.S. Fish and Wildlife Service and funded under provisions of the 1990 Coastal Wetlands Planning, Protection and Restoration Act. Funding is provided by Sport Fish Restoration Act revenue – money generated from an excise tax on fishing equipment, motorboat and small engine fuels.

The grants support President Obama’s America’s Great Outdoors initiative for conservation, recreation and reconnecting people to the outdoors. A recent 50-State Report lists more than 100 of the country’s most promising projects – a result of 50 meetings with governors and stakeholders held by Salazar and other senior Interior officials to solicit ideas on how to best implement AGO in their states – including two projects that will be supported by today’s grants. These two projects are:

Bird Island Cove Estuarine Habitat Restoration Project – The Texas Parks and Wildlife Department was awarded a $1 million grant to protect and restore coastal and estuarine barrier island habitats in West Galveston Bay along the north shoreline of Galveston Island, Texas. The project will restore approximately 70 acres of estuarine marsh complex, which will provide additional protection to the existing intertidal marsh that has been degraded by the effects of relative sea level rise.

Thousand Acre Marsh Wetland Protection Project – The Delaware Division of Fish and Wildlife and Delaware’s Open Space Program will acquire the 194-acre Yardley-Dale property, part of the Thousand Acre Marsh along the Delaware River in New Castle County. The Thousand Acre Marsh is a haven for breeding and wintering waterfowl, waterbirds, muskrat, and fish. The marsh also provides critical wintering habitat for bald eagles. Delaware Fish and Wildlife plans to install a platform for bird watching with interpretive signage, blinds for duck hunters, and a trail system to provide public access.

Including the 2012 grants, the Service has awarded nearly $300 million to coastal states and territories since the program began in 1992. When the 2012 projects are complete, about 293,000 acres of habitat will have been protected, restored or enhanced as a direct result of these grants.

Coastal areas comprise less than 10 percent of the nation’s land area yet support a significant number of wildlife species, including 75 percent of migratory birds, nearly 80 percent of fish and shellfish and about half of all threatened and endangered species. 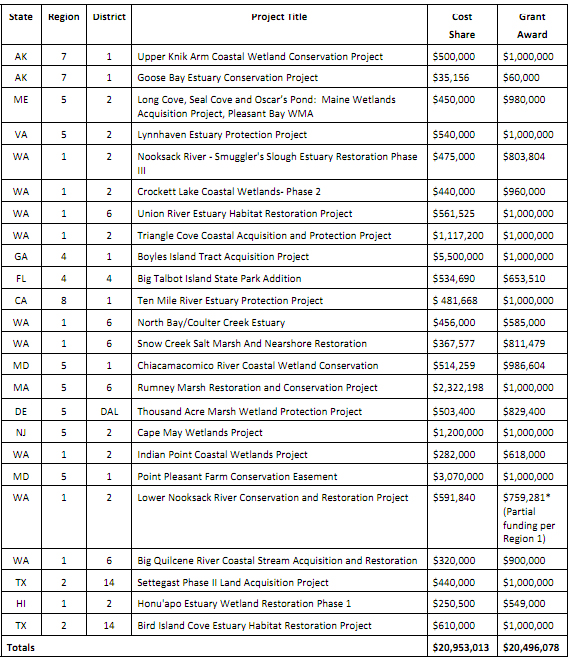 This image, taken from a larger map found in the Honu’apo Park Resource Management Plan released in June 2010, shows the estuary as its situated in the park. 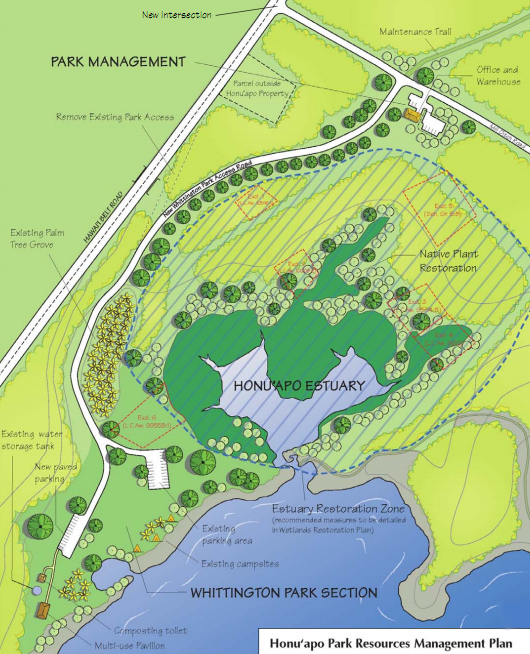