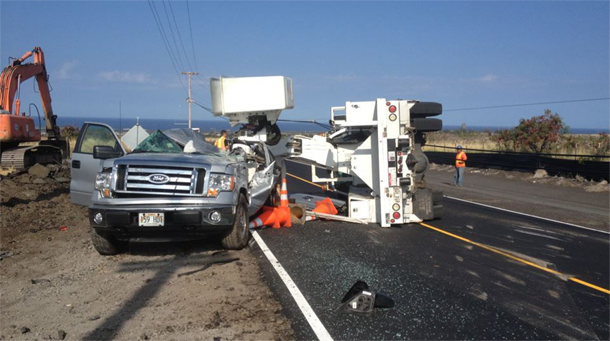 The woman was identified as Sheila Goto.

Responding to a 9:33 a.m. call, Kona patrol officers determined that a 42-year-old Keaʻau man had been operating a 2000 Ford (crane truck) from a local electrical company and traveling west on Kaiminani Drive when the boom of the truck struck a large cable going across the roadway.

This caused the truck to tip over on its left side and the boom of the truck to strike a 2011 Ford pickup truck traveling east that was being operated by Goto.

Goto had to be extricated by Fire/Rescue personnel and later transported to Kona Community Hospital, where she was pronounced dead at 12:22 p.m.

Two passengers in the Ford pickup truck, a 37-year-old man and a 54-year-old woman, both from Kailua-Kona, were treated and released from Kona Community Hospital.

The driver of the crane truck was confined to Kona Community Hospital in stable condition.

The driver and front seat passenger of the Ford pickup truck were the only people wearing their seat belts.

It is unknown at this time if speed, alcohol or drugs were involved.

Traffic Enforcement Unit officers have initiated a negligent homicide investigation and have ordered an autopsy to determine the exact cause of death.

Police ask that anyone with information about this crash call Officer Thomas Koyanagi at 326-4646, extension 229.

This is the first traffic fatality on the Big Island this year compared with four at this time last year.