A Plan for Pahoa: Pahoa Regional Town Center Planning to Begin in March Media release by Robin Stetson PAHOA, Hawaii: The Event EVERYONE INTERESTED IN THE FUTURE OF PAHOA is invited to attend the first Pahoa Plan Community Event on Saturday, March 24, 2012, 3-6 p.m. at the Pahoa Community Center. The undertaking of the Pahoa Regional Town […]

A Plan for Pahoa: Pahoa Regional Town Center Planning to Begin in March

The Event
EVERYONE INTERESTED IN THE FUTURE OF PAHOA is invited to attend the first Pahoa Plan Community Event on Saturday, March 24, 2012, 3-6 p.m. at the Pahoa Community Center. The undertaking of the Pahoa Regional Town Center Plan (known as the “Pahoa Plan”) will launch with Saturday’s gathering and offer an opportunity for members of the greater Pahoa community to get informed and get involved.

The first half of the event, 3:00-4:30, will provide information about the Pahoa Plan, ask for feedback from the audience, and make the Community Input Survey available to complete and return. This event will also provide interested persons the opportunity to join working committees to guide the development of the Pahoa Plan, or to help with outreach for community input via the survey. The second half of the program, 4:30-6:00, will offer musical entertainment, refreshments and an opportunity to get acquainted with Pahoa neighbors.

Why A Plan?
Pahoa, described as a Regional Town Center in the Puna Community Development Plan (the PCDP), is tasked with providing a number of services and resources to those living in and around the 96778 ZIP code area. There is no denying that the neighborhoods in 96778 are growing fast, as evidenced by the 2010 Census which indicates a 35% population increase since 2000. As the region continues to grow, what impact will this have on Pahoa? What will Pahoa look like in fifty years’ time?

The truth is, whether we want Pahoa to stay small-town cozy, grow to incorporate new services and facilities, become the next big city in Hawaii, or some creative combination of these, we as a community need to lay out a plan for how we want development (or lack thereof) to happen and where (or where not). If we do nothing, development will continue along its own course. But without guidance, it will proceed in an aimless manner that, in the long run, may or may not make environmental, social, or economic sense.

Who?
To address this need, a team of four individuals formed as a steering committee to lead the community-based process of developing a comprehensive Pahoa Regional Town Center Plan. Current Steering Committee members are Madie Green, Jon Olson, Robin Stetson and Rob Tucker, whose efforts follow guidelines set forth by the PCDP, adopted by ordinance in 2008 by
the Hawaii County Council.

“We will not be creating the Pahoa Plan by ourselves,” states steering committee member, Robin Stetson.“ Our top priority is that Pahoa’s community is the source of ideas for services and facilities which are needed in Pahoa, as well as which elements of the culture, history and resources of the region need to be supported and emphasized within the town itself. The more minds and hearts involved in this process, the better the outcome will be.”

The Goal
The steering committee’s goal is to have a final draft of the Pahoa Regional Town Center Plan ready to present to the County Council for approval and adoption by year end 2012.

The Pahoa Plan Survey
To generate widespread public input the Steering Committee will host several survey locations at gathering places including farmers’ markets, shopping centers, schools and other key locations in and around Pahoa Town. During the 2-3 weeks period beginning March 24th , residents may share their ideas for Pahoa at these locations by either talk story or written survey. In addition, participating Pahoa businesses will have the written survey available to take on a walk-in basis during business hours. An online survey will also be available 24-7 and will go live on March 24th at http://tinyurl.com/7dw9vkc.

Volunteers Needed
Volunteer participation is encouraged to conduct the outreach phase of the survey with the goal of hearing from as many residents of greater Pahoa’s diverse population as possible. Interested persons may also choose to be a part of working committees involved with processing public input and developing the Pahoa Plan. For More Information, please send anemail to pahoaplan@gmail.com or phone: 808-430-3991. 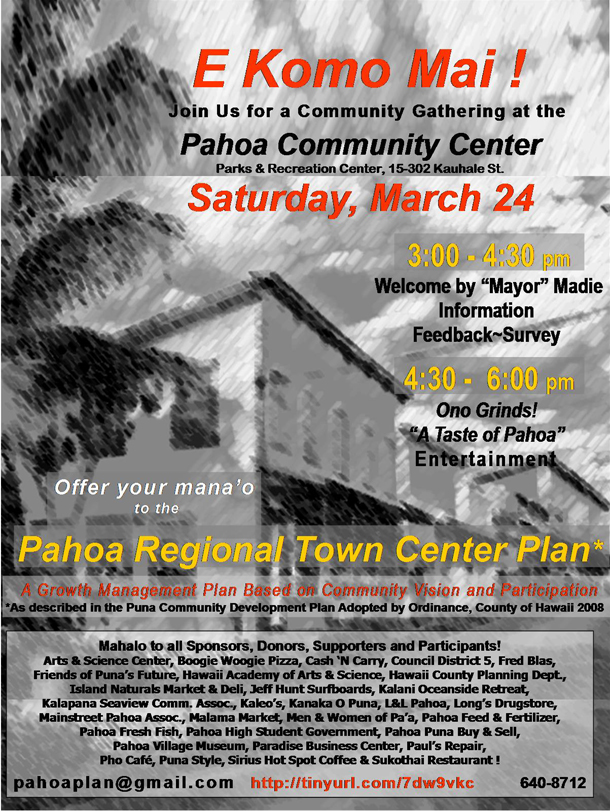