Hawaii County Mayor Billy Kenoi submitted his proposed budget for the Fiscal Year 2012-2013 to the county council on Thursday, and the county is once again looking at falling revenue and a smaller budget.

HILO, Hawaii: Hawaii County Mayor Billy Kenoi submitted his proposed budget for the Fiscal Year 2012-2013 to the county council on Thursday, and the county is once again looking at falling revenue and a smaller budget.

Speaking to a small group of media in his office via teleconference on Oahu, the mayor said his balanced budget of of $365,293,348 does not increase taxes, and is $37,911,650 or 9.4 percent less than the budget in effect when his administration took office in 2008.

Once again, the big challenge comes from a forth straight year of declining real property tax revenue. The county says it will cost more to deliver the same services next year, and there will be less money available to do so.

Kenoi says that for the forth year, spending is down: Consulting contracts have been reduced, as well as overtime spending.

This year’s budget restricts out-of-state travel, cancels or delays vehicle purchases and the replacement of aging computers and software, and employee training has been deferred or eliminated.

It will also begin to phase out the operation of the lava viewing area in Kalapana, resulting in a savings of $300,000.

The mayor is also proposing to discontinue the West Hawaii Golf Subsidy for a savings of $500,000.

How does this move relate to the Hilo Municipal Golf Course?

The budget also reduces the general fund subsidy of the solid waste fund by $2.3 million. The mayor explained.

And of course, everyone wanted to know how this budget will approach the payment to GasB 45, a secondary health-related payment that is designed to pre-fund future obligations for retirement health care, the deferral of which created such a controversy last year. Kenoi said that once again, this year’s anticipated payment will be deferred, although it will not affect the county’s credit rating. The fund currently has $61 million in the account.

Employee furloughs will continue, as per the terms of the collective bargaining agreements.

There will be no lay-offs, but Kenoi has a warning about the how the state legislature could still decide to put a kink in his proposal with a Transient Accommodations Tax grab.

The budget will now be in the hands of the county council for review, and the mayor will submit his final, ammended budget down the road. 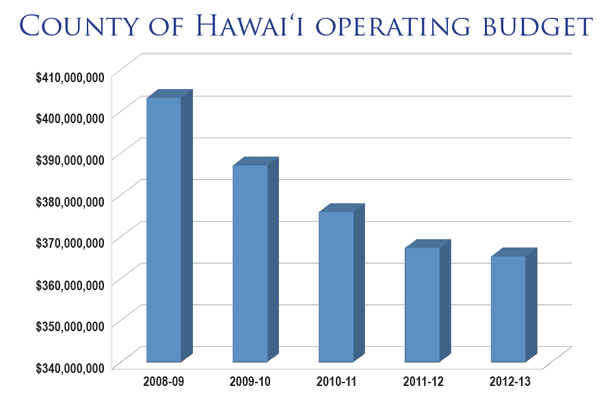