Those involved in the Adopt-a-Beehive with Alan Wong Program at UH-Hilo were bestowed with a Certificate of Recognition at the statehouse on Friday. 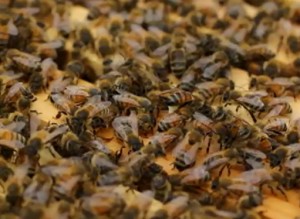 HONOLULU, Hawaii: Those involved in the Adopt-a-Beehive with Alan Wong Program at the University of Hawaii-Hilo were bestowed with a Certificate of Recognition by Senator Gilbert Kahele at the statehouse on Friday.

Last year, Chef Alan Wong teamed up with UH Hilo to create the “Adopt-a-Beehive with Alan Wong Program” in order to bring awareness of the honey bees’ critical decline in population.

Now offered for a second year, the successful innovative program supports the education of student beekeepers, promotes research and development of healthy beehive practices in Hawai’i, and educates the public about the vital role that honey bees play in sustaining agriculture.

Invasive pests like the varroa mite and small hive beetle have decimated beehives around Hawaii Island, forcing a change in agricultural practices.

There are 25 bee hives at the UH Hilo apiary located on the 110 acre Panaewa farm that are used for the hands-on beekeeping laboratories. The hives are assigned to students who learn manipulation skills and then send public “adopters” monthly updates on the status of their hives.

According to the University of Hawaii, honey bees across Hawaii have helped sustain agriculture for over 150 years. But, bee colonies began collapsing in 2007 due to the invasion of the varroa mite.

UH Hilo Chancellor Donald Straney has been a strong supporter of the program since its inception. He believes UH Hilo has the potential to become a global model in promoting research and educating the public about the vital role honey bees play in sustaining agriculture.

The Senate Committees on Agriculture and Education passed House Bill 2100, relating to bees this past Monday, March 19, 2012. The bill would appropriate funds to the University of Hawai`i for statewide bee hive research. The bill is now with the Senate Committee on Ways and Means for consideration.