Big Island police have located and arrested 19-year-old Kale Thomas Ramangmou, and charged him in connection with numerous incidents in Puna, all taking place inside cars... 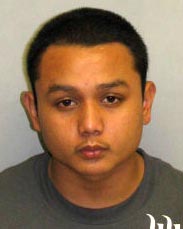 PUNA, Hawaii: Big Island police have located and arrested 19-year-old Kale Thomas Ramangmou, and charged him in connection with numerous incidents in Puna, all taking place inside cars… some we have reported on here on Big Island Video News in the past.

Ramangmou’s name came up during a police investigation alleged robbery of another Pahoa man on Kaohe Homestead Road; he was wanted for questioning.

But now that he has been arrested, police say Ramangmou has been involved in some other recent crimes, like the alleged April robbery of two California visitors who were parked in a car by Ahalanui Hot Ponds.

Here is the police rap sheet that developed after Ramangmou was arrested on Monday morning (May 7):

At 3:15 p.m. Tuesday he was charged with second-degree robbery, first-degree criminal property damage and first-degree unauthorized entry into a motor vehicle. The victim in that case, a 30-year-old woman from Mill Valley, California, reported that 2-3 unknown suspects threw a rock through the front passenger window of a car she was parked in across from Ahalanui Hot Ponds in lower Puna at 11:30 p.m. on April 29, and then demanded money. The suspects allegedly stole a cell phone holster before fleeing the area. The victim sustained minor injuries from flying glass but declined treatment.

At 5:15 p.m. Tuesday, Ramangmou was charged with second-degree robbery, third degree assault, second-degree theft, third-degree criminal property damage and unauthorized entry into a motor vehicle in connection with an incident at 1 a.m. on January 28. A 40-year-old Pāhoa man reported that while he was in a parked van at a rural retreat in lower Puna, a man got into his car and asked for cigarettes and beer and then punched him and took away his cordless phone. A second suspect punched him again and a third suspect threw a golf ball-size rock through a side window of the van.

At 8:05 p.m. Tuesday, he was charged with second-degree robbery, first-degree burglary and fourth-degree theft for a robbery on May 1. In that case, a 43-year-old Pāhoa man reported that he was at a 24-hour convenience store in Pāhoa at around 2 a.m. when an acquaintance he knew previously, parked in the area and offered him a ride home. The victim accepted the ride and was driven to an area off of Ka‘ohe Homestead Road in Pāhoa, where the same suspect reportedly assaulted him and removed undisclosed items. In addition, upon making his way home, he discovered that it had been burglarized and several items were stolen.

Ramangmou’s bail was set at $159,000. He was scheduled to make his initial court appearance Wednesday (May 9).