Former Big Island mayor delivered surprise testimony before the Hawaii Environmental Council on Friday, and it appears to have made a difference in the council's decision on important exemptions for geothermal energy exploration. 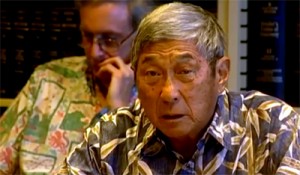 HONOLULU, Hawaii: Former Hawaii Island mayor and civil defense director Harry Kim delivered surprise testimony before the Hawaii Environmental Council on Friday, and it appears to have made a difference in the council’s decision on important exemptions for geothermal energy exploration.

The council voted on two important measures… both would lift the requirements for an environmental assessment or an impact statement when exploring for new geothermal sources in Hawaii. The theory is that the exemptions would speed up the development process and encourage investment by sidestepping the expensive environmental review process.

On one side, folks like Richard Ha who are advocates for the geothermal industry, and who say that time is running out on affordable power here in the islands. Officials from the Department of Land and Natural Resources are also in support of the exemptions.

But on the other side of the issue: residents of Puna, who live in the backyard of the 30 megawatt Puna Geothermal Venture, and say they suffer from noise and health problems, and are in fear of what appears to be a massive fast tracking to grow the industry, presumably on Puna’s volcanic rift zone.

Standing with those folks on Friday… Harry Kim, whose statements resonated with the Environmental Council.

The issue sailed through a sub committee vote a few weeks prior. KITV covered both meetings, where geothermal advocates like Mililani Trask dismissed the concerns of opposing organizations like the Pele Defense Fund…

But on Friday, Kim’s testimony struck a chord with the council. The body voted down an EA exemption for invasive exploration measures, like drilling or anything that disturbs the environment.

DLNR head William Aila appeared disappointed in this KITV interview. However, an exemption for non-invasive exploration – like temperature readings, sonar readings or surface measurements – was given the OK.