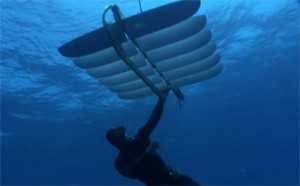 KAWAIHAE, Hawaii: A first-of-its-kind scientific expedition across the Pacific Ocean was launched from the Big Island recently.

The PacX Wave Gliders – a wave-powered, autonomous marine robot developed by the ocean data services provider Liquid Robotics – are continuing their record-breaking journey across the high seas with approximately 5000 nautical miles until their final destinations of Australia and Japan.

Eric Brager is director at the Kawaihae Marine Operations and Test Center of Liquid Robotics. He spoke about the project in this video release, distributed by the Liquid Robotics team.

The Wave Gliders have already collectively traveled more than 13,000 nautical miles. This is more than 2 times the distance from San Francisco to Tokyo. During their voyage, the Wave Gliders are collecting and transmitting in near real-time, unprecedented amounts of ocean surface data on a scale never before continuously collected across the Pacific Ocean.

The Liquid Robotics team says the purpose of the PacX ocean crossing is to ignite interest in ocean science.

This initiative comes on the heels of a recently unveiled study called The Nation’s Report Card* from the US Department of Education that shows more than two-thirds of America’s 8th graders are missing a solid grasp of science principles.

The PacX data is available free to anyone who registers on this website. more than 1,600 people around the world have downloaded the data and are following the robots’ journey. Additionally, the PacX Challenge scientific competition is open to anyone worldwide who wishes to compete. The grand prize award is $50,000 and six months of Wave Glider data services. Abstracts are due July 17, 2012. Learn more about that on this website.

As for the travelling Wave Gliders… during the voyage, one pair of robots will travel to Guam and cross the Mariana Trench, the deepest place on earth, on their way to Japan. The second pair will travel to Fiji on their way across the equator on a route to Australia. The journeys will end in late 2012 or early 2013.