The Transit of Venus was underway by slightly after noon on Tuesday... the rare celestial event when the planet Venus passes directly in front of the sun from Earth's perspective. 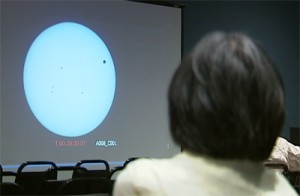 MAUNA LOA, Hawaii: The Transit of Venus was underway by slightly after noon on Tuesday… the rare celestial event when the planet Venus passes directly in front of the sun from Earth’s perspective.

The occurrence always happens in pairs eight years apart (the first was in 2004) … and this wont happen again until 2117, meaning most of us will probably not be around to see it.

That one of the reasons why the residents of Hawaii Island were so excited to witness the moment. Also, astronomers from around the world descended on the Big Island, regarded as the heart of astronomy in the Pacific, where various broadcasts were streamed live from the observatories on the summit of Mauna Kea.

Closer to sea level, Hilo’s Imiloa Astronomy Center held special events through out the six and a half hour transit.

The center displayed NASA’s live broadcast from the summit to a crowd in the auditorium… In Hilo, this would be the only way most folks would get to see the transit. That’s because Hilo was in character on Tuesday, raining out activities planned for the lawn of Imiloa… what use would these special solar viewing glasses be? Courtesy of Mauna Kea Support Services, glasses like these are the only safe way to witness the silhouette of Venus against the burning sun.

Some folks DID know what to do with the solar glasses… like take them on a trip up the Saddle Road to Puu Huluhulu, right between the two mountains, where the sun was shining in a clear sky.

Visitors from around the world made the pilgrammage to view the transit from the island’s two huge volcanic mountains.

Transit viewing was also better on the west side of the island. Solar set ups were available at Puukohala Heiau National Historic Site, Waimea, and at NELHA in Kailua Kona.

With Mauna Kea the center of the world’s attention, some hardy folks decided instead to spend the six ir seven hours on the OTHER mountain… the world’s largest active volcano, Mauna Loa.

Here, at the end of a long access road, 11,000 feet above sea level, is Hawaii’s Mauna Loa Observatory, which shares its site with the Mauna Loa Solar Observatory; by name alone, the place to be on Tuesday.

At least, John Bunyan of Oregon thought so.

Mauna Loa also attracted a German contingent, looking for an alternative to Mauna Kea’s crowd. Travelers from France were there as well, and some among them were already familiar with astronomy on the island.

The Mauna Kea Visitors Center says the last transit that could be viewed in its entirety from Hawaii occurred in 1769, with a partial viewing in 1874 & 1882. In fact, in 1874, it is said that King David Kalakaua invited the world to Hawaii to view the transit.

[VIDEO by David Corrigan, VOICE of Stephanie Salazar, with video images of 2012 Transit of Venus by NASA, and at the beginning of this video, live stream from the Keck Observatory at the summit of Mauna Kea]