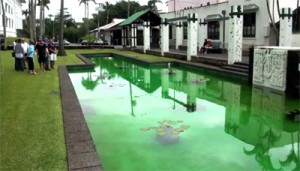 The Big Island Water Garden Club, B&B Pumping Service and GW Construction provided vital assistance with the restoration effort. Additional help came from the University of Hawai‘i atHilo’s Pacific Aquaculture and Coastal Resources Center, which cared for the fish during the project’s cleaning phase, along with U.S. Army firefighters, the Hawai‘i County Department of Public Works, and the Parks Department’s Maintenance Division.

Among those who attended Wednesday’s ceremony was state Sen. Gil Kahele, who shared his personal connection to the park.

With a capacity of more than 50,000 gallons, the county says the koi pond was dedicated in 1948 as a permanent memorial to the 157 Hawai‘i Island residents who gave their lives during World War II. Later, plaques were added to honor military personnel who perished during the Korean and Vietnam wars.

Completed in 1934, Kalākaua Park is named after King David Kalākaua, Hawai‘i’s seventh monarch, who ruled from 1874 to 1891. Known as the “Merrie Monarch,” King Kalākaua read royal proclamations to cheering crowds gathered in the park, which also was the site of Hilo’s first courthouse. The park’s distinctive sun dial, erected in 1877, was used for years to set the official time for maritime operations, island commerce and other activities.

“This beautiful memorial is for all our brave men and women who made the ultimate sacrifice in World War II, in Korea and Vietnam. It was such an honor to have our hard working employees work together with volunteers from the community to get together and restore this historic, special place. It revitalizes the entire downtown Hilo. We’re honored that so many came together to make something so special.” – Mayor Billy Kenoi, in a media release

“Back in 1949 is when I wandered across this place, and it was beautiful. I was only 8 years old, and I just stood here in awe of this place that represents the sacrifices of our young men and women.” – State Senator Gil Kahele