The Hawaii County Office of the Mayor provided this video and news release.

A renovated and expanded Waiākea Uka Park and Stanley Costales Gymnasium was rededicated during a public ceremony held Thursday morning in Hilo.

The morning began with a blessing by Pastor Sheldon Lacsina of nearby New Hope Christian Fellowship. Councilman Yoshimoto presented Mrs. Roberta Costales, the widow of Stanley Costales, with a framed copy of a 2002 Hawai‘i County ordinance officially naming the gymnasium after the standout athlete who in 1951 signed a professional baseball contract to play shortstop for the Cleveland Indians. Stanley Costales also worked for Department of Parks and Recreation from 1969 to 1987.

“Stanley was a great athlete because of this gym,” Mrs. Costales said.

The gym and park have undergone a $1 million renovation that included adding aluminum bleachers inside the gym and at both ball fields, all of which are now connected by paved walkways meeting federal accessibility requirements. Also, a new roof was installed atop both the gym and annex building, the gym’s bathrooms were renovated and made to meet accessibly standards, the parking lot was paved, and a new parking area added to accommodate more park users.

GW Construction performed the work under a $1,032,376 contract financed with a combination of county bond proceeds and a federal community block grant. Construction started in January.

Much of the work exceeded contractual requirements, Mayor Kenoi said in publically thanking the contractor. For example, instead of refurbishing the existing gymnasium roof, GW Construction replaced it for the cost of materials, while donating the labor.

“That’s from growing up in the area,” he said of owners Gerald and Wendy Yamada’s generosity.

Mayor Kenoi also praised the Parks Department’s recreational staff, community members and others who worked tirelessly to complete the improvements.

“I’m just here to say thank you. Thank you to all the people who came together to make it happen,” he said.

Mayor Kenoi also shared with the children in attendance the secrets to success.

“Don’t forget now guys,” the Mayor told them, “dream big, work hard, never give up, and treat everyone with aloha.” 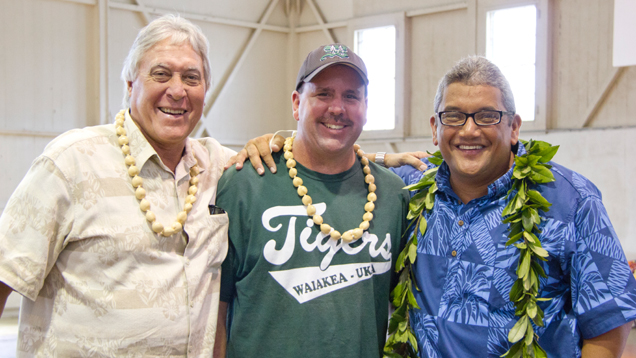