No rain in sight at Wong Stadium; perfect weather for the home opener of the Hawaii Stars, Hilo's new independent pro baseball team. 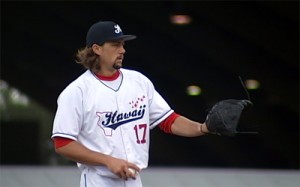 HILO, Hawaii: It was a beautiful evening in Hilo on Tuesday night. No rain in sight at Wong Stadium; perfect weather for the home opener of the Hawaii Stars, Hilo’s new independent pro baseball team.

The team faced the Sonoma County Grapes before a crowd of a couple hundred fans. (UPDATE: the final count, according to the team, was over 700)  The Stars play in the the North American Baseball league, featuring teams from California, Texas, and Hawaii.

Owner Bob Young, who also runs the Na Koa Ikaika Maui ball club, has high hopes for the team on the Big Island.

Hilo had its own team before. In the nineties, the Hilo Stars played Hawaii Winter Baseball on the Big Island. The league folded in 2008.

The starting pitcher on Tuesday night: Ronnie Loeffler, a 2004 Waiakea graduate who pitched at UH-Hilo. Loeffler looked good on the mound. His six strike outs lifted the Stars to a three to nothing shutout victory, their fifth win of the season.

There are other local talents on the roster… Michael Kenui, Cortney Arruda, and Reece Alnas, who – at his first time to the plate as a Star in Wong Stadium – a hit into what should have been a certain double play. But thanks to an error, Alnas ended up on second base. Alnas would contribute an RBI to the winning effort later in the game.

The same two teams meet again: every evening from Wednesday to Friday, and face off in a double-header on Saturday. Then the Hawaii Stars travel to San Rafael. The season runs through August.