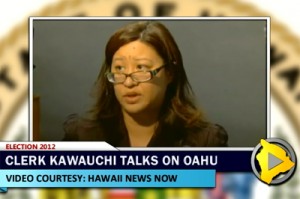 In the last few days, Kawauchi repeatedly refused to answer direct question about why she closed her office in Hilo for a day last week or why she went to the authorities on Oahu.

In front of Honolulu TV stations, Kawauchi finally revealed that her office discovered several dozen Hawaii Island voters with duplicate voter registrations and found about four people who voted twice in the same elections in 2010.

Her findings may be considered “typical” according to seasoned elections officials, but shutting the clerk’s office with little explanation is anything but. Especially just weeks away from the primary election.

Council Chair Dominic Yagong – who heads the legislative branch of government that oversees the clerk and the  elections division – said the story would go public soon enough.

On Tuesday, the rift between Nago and Kawauchi was apparently mended, after the two finally met on Oahu on Tuesday.

Kawauchi also says the clerk’s office in Hilo discovered records showing about four people who were allowed to vote twice in the 2010 elections in different districts and precincts, and that’s why she went to lawyers in the attorney general’s office last Thursday.

As Hawaii News Now and Keoki Kerr reported on Tuesday evening, the issues Kawauchi uncovered are fairly common. Glen Takahashi, who’s been Honolulu’s elections administrator for the last ten years, said as much in this interview.

According to Kerr’s report, other state and county officials said there’s no evidence of fraud happening on the Big Island. State officials notified the FBI, which began gathering information on the case but never opened a formal investigation, sources said.

According to Hawaii News Now, the last voter fraud case in Hawaii happened nearly thirty years ago, with the conviction of Clifford Uwaine in 1986 for improperly obtaining absentee votes from elderly people at a retirement home.

Kawauchi is holding a press conference on Wednesday to talk to Hawaii Island media about the situation.