VIDEO: Mahalo, Senator! Got another $100 million?

Hawaii County Mayor Billy Kenoi and department heads thank Sen. Daniel Inouye for all the federal money he has sent to the Big Island Video by David Corrigan | Voice of Stephanie Salazar HILO, Hawaii: It was a chance to say mahalo to Hawaii’s beloved Senator, Daniel K. Inouye. And, with smiles on their faces, […] 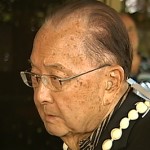 Thanks heaped onto Senator Inouye in Hilo

Hawaii County Mayor Billy Kenoi and department heads thank Sen. Daniel Inouye for all the federal money he has sent to the Big Island

HILO, Hawaii: It was a chance to say mahalo to Hawaii’s beloved Senator, Daniel K. Inouye.

And, with smiles on their faces, a chance for Mayor Billy Kenoi and his cabinet to ask the powerful president pro tem of the United States for another handout. Is $100 million too much?

“Not withstanding, even with the demise of earmarks… we’ve done pretty well,” said the elder Inouye – who sits as chairman of the Senate Appropriations Committee – said he will do his best to steer money in the direction of the Aloha State, which for so long has been sort changed.

“Ill try my very best because I’ve always felt that we have a special role in Washington. Up until 1959 there’s no question we in Hawaii were shortchanged. And we took the punishment without much complaint. For example, we went to the gas pump and paid all the taxes… Those guys used that money for interstate highway system. But wheres our interstate highway system. We don’t have that. So here we got short changed in millions. That’s just one example. Then we have a situation that was just unconscionable. If you wanted to borrow more than 5 grand, you had to go to Honolulu. If you wanted higher education, Honolulu or elsewhere. If you wanted anything beyond appendectomy, Honolulu. So that has been my mission, give the people on the Big Island and all the other islands the same benefits that we in Honolulu enjoy. And it takes a few bucks.”

Since becoming President Pro Tempore of the U.S. Senate in 2009, which makes him third in the line of succession to the presidency, after the vice president and the Speaker of the House of Representatives – Inouye travels in the company of the secret service, something he often jokes about.

“I love the car that’s provided for me,” the senator said. “I have 24 bodyguards. Incidentally I’m easy to talk to but from now on don’t touch me too much. Because these guys get nervous. They all carry guns. All of em carry guns. Its just a friendly warning that’s all. don’t mess with me.”

“I find it very difficult to say no to Billy,” Inouye admitted. “He’s got this strange charm and seductive voice.”

The one-time, self-described earmark king warned the officials that Washington is a different place now, but there is still hope…

“But, over the years, I’ve learned a few tricks” said the senator. “So you can call it anything you want. Earmarks or whatever. As far as I’m concerned its congressional initiative. You’re not against that are you? Sometimes they call it Dan’s initiative, but…. We’ve done pretty well. Per capita -wise, it may interest you to know, the people of Hawaii receive more than any other state. That should be done, because we’ve been short changed. I figure it will take a few more years to come up to par. And I hope to do it while I’m alive.”

But getting back to the real reason for the visit to the Mayor’s second floor balcony in the hilo county building… the administration wanted to tell the Senator – face to face – thank you.

The directors of Hawai‘i County’s different departments shared with the Senator the impact that federal funded projects have had on the island.

Hawai‘i County has been the recipient of lots of federal funds, getting $115 million in American Recovery and Reinvestment Act funds alone.

Kenoi’s crowning achievement has been the $30 million secured for Ane Keohokālole Highway project in Kona – the largest single ARRA project in Hawai‘i.

Other recent federal funds awarded to Hawai‘i Island projects include $6.2 million for the new Makalei Fire Station in Kona, over $11 million to improve and expand the island’s Hele-On bus system to reach more people on the 4,028 square mile island… SOUND… and over $24 million in grants for nearly 50 community development projects.

Mayor Billy Kenoi worked as an intern in Sen. Inouye’s Washington, D.C. office in the summer of 1992 as Mayor Kenoi was working toward his degree in Political Science from the University of Massachusetts at Amherst.

Sen. Inouye was present at Mayor Kenoi’s first cabinet meeting as a newly elected mayor four years ago, held at Café 100 – the Senator’s favorite Hilo eatery, named for the 100th Battalion of which Sen. Inouye was a member.

Of course, its also election season… the meeting certainly served to illustrate how having friends in high places can be a benefit to the Big Island.

“This may be a good time to tell you,” Inouye said in closing, “I hope the Big Island sends him back again, because its a pleasure dealing with Billy.”