VOLCANO WATCH article submitted by USGS Hawaiian Volcano Observatory On trade wind days, which prevail much of the year, visitors to Kilauea’s summit are greeted by the majestic sight of a towering eruption plume that drifts to the southwest. At night, the deep red glow of the lava lake’s overturning surface is reflected by the […] 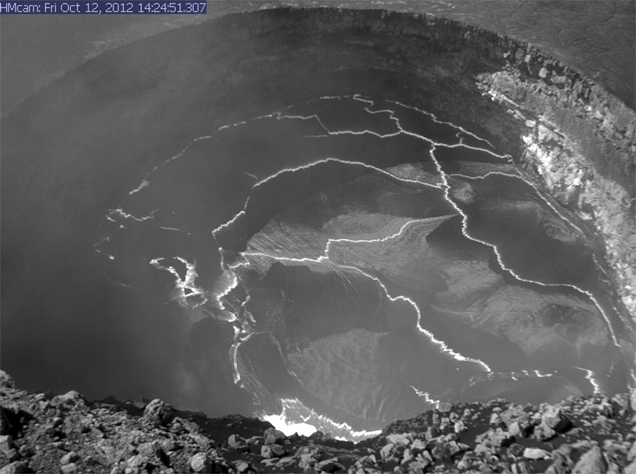 On trade wind days, which prevail much of the year, visitors to Kilauea’s summit are greeted by the majestic sight of a towering eruption plume that drifts to the southwest. At night, the deep red glow of the lava lake’s overturning surface is reflected by the fume above the vent within Halema`uma`u Crater.

The plume and nighttime glow wax and wane, but the sensory experience is normally visual (and perhaps spiritual). Until recently, that is.

For the past several months, lava within the summit vent has been slowly and fitfully rising. As of October 5, 2012, lava reached a level that covered the previous high-lava “bathtub” ring within the vent. This is when the other human senses—sound, smell, taste, and feel—became more engaged by the eruption, even as far away as the Jaggar Museum Overlook in Hawai`i Volcanoes National Park.

As described by the Hawaii Tribune Herald on October 10, the rising level put hot lava much closer to the cooler rock than it had been before, causing rapid heating, expansion, and cracking of the vent walls. This caused bangs and booms that could easily be heard at Jaggar Museum because the trade winds, which usually steer sound away from the overlook, had ceased. In their place, gentle Kona breezes carried the rock-breaking sounds to the overlook, as well as the pungent smell and taste of sulfur dioxide gas in the plume and some fine strands of Pele’s hair.

The rise in lava level within the vent is associated with a modest uplift and expansion of Kilauea’s summit area. The root cause for this expansion isn’t clear. It’s not likely due to an increase in magma supply from depth, because a significant increase in carbon dioxide emissions, which would reasonably accompany increased magma supply, has not been observed. Another possible explanation for the uplift and expansion is a backup of magma caused by a constriction in the volcanic plumbing system between the summit magma reservoir and the active Pu`u `O`o eruptive vent on Kilauea’s east rift zone.

There are some observations and data that support the possibility of a summit-rift constriction. For instance, when the lava lake level within the summit vent was previously as high as it is now, the lava in east rift zone vents was also at the same high level, minus about 80 m (260 ft) of frictional “head loss” (see Volcano Watch 07/05/2012). The reason for this lava level similarity is that the summit and rift vents, while over 18 km (11 mi) apart, are hydraulically connected. This connection has been responsible for significant east rift eruptive changes that occur in response to variations in summit activity, particularly during the past several years.

For the last several months, lava within Kilauea’s summit vent has been at its highest level since the summit eruption began in 2008, and yet it appears that the associated high summit pressure has not significantly transmitted down the volcano’s east rift. The lava level within Pu`u `O`o crater, while elevated, is not extraordinarily so. And even though lava is flowing through a tube near the base of the Pu`u `O`o cone, flows haven’t reached the ocean in nearly a year.

One possible outcome of continued summit expansion and lava level rise could be an eventual outpouring of lava on the floor of Halema`uma`u Crater. Alternatively, the increased pressure might overcome the apparent constriction, resulting in an outbreak somewhere between the summit and Pu`u `O`o, akin to the March 2011 Kamoamoa fissure eruption.

Time will tell what happens next. For now, visitors to Kilauea’s summit can continue to watch the show and listen to the symphony of bangs and booms.

(EDITOR’S NOTE: The photo at the top is a screen-grab taken from the Live Panorama of Halemaʻumaʻu Overlook Vent webcam on October 12. This webcam and others can be found on the USGS HVO website.)