Video courtesy Ironman on YouTube KAILUA-KONA, Hawaii: The 2012 Ironman World Championship is in the books, and this year we have a new men’s and women’s world champion. Australia’s Pete Jacobs took first place with a time of 8:18:37, four minutes ahead of Germany’s Andreas Raelert (8:23:40). Frederik Van Lierde of Belgium finished third. Leanda […] 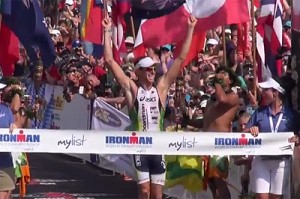 KAILUA-KONA, Hawaii: The 2012 Ironman World Championship is in the books, and this year we have a new men’s and women’s world champion.

Leanda Cave of Great Britain, is the new women’s champion. She finished in 9 hours and 15 minutes, a close minute ahead of Switzerland’s Caroline Steffen. Mirinda Carfrae of Australia took third.

This is the sixth year in a row that an Australian has won the Ironman world championship, according to Hawaii247.com.

Jacobs was in good spirits after the exhausting jaunt, Karin Stanton reports:

“I’m in love with this sport,” he said in a finish line interview. “I’m so lucky to have this opportunity and have a good day out there. It was an unbelievable day and there’s much love out there.”

2,044 triathletes took to the grueling Kona course this year. The punishing race – one of the hardest in the world – includes a 2.4-mile ocean swim, 112-miles on the bike, and ending with a 26.2-mile run.

The Ironman World Championship is the biggest event held in Kona all year. The population of the seaside town on the west side of the Big Island of Hawaii swells with endurance competitors and their families, along with the faithful fans of the sport of triathlon.